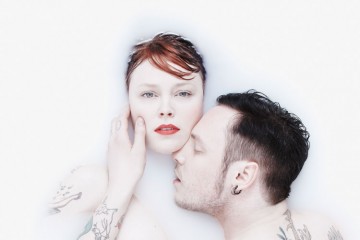 Sweden’s Victoria + Jean created huge ripples this side of the Atlantic when Indie Week Europe’s 2015 winners performed several nights during Indie Week Toronto. Their live performances have the hitting force of a tsunami, to be more accurate, and Victoria+Jean’s powerful live performances were a huge smash. This is one band that must be seen live: their power and force must be seen to be believed.

There’s really no point in playing the reference game when defining Victoria+Jean; it just wouldn’t work for them. Although Victoria sings and Jean plays guitar – like thousands of others across the globe – their first album Divine Love is from another world.

Victoria spent just enough time in Stockholm to enter this life, passed through London to get an education before she discovered Paris and got to know the backgrounds of fashion and music. Then comes Brussels, her meeting with Jean, an uncommonly talented musician and latent globetrotter. The Victoria+Jean duet is born. The world is little more than a village. Guitar cases scratch the floor of a Boeing whilst the artists have their noses stuck to the plane’s window as they fly off to Rio or New York. One day, filled to the brim with tales, images and notes, they realise that there’s enough raw material and songs to make an album. Their first opus reflects their lives: between cities, between flights. London, Stockholm, Paris, Brussels, New York… The album sleeve mentions some of today’s greatest sound engineers, those mysterious sorcerers who toiled on some of our favourite records, including John Parish (P J Harvey), Ian Caple (Tricky, Tindersticks, Bashung), Christoffer Berg (Depeche Mode, The Knife, Fever Ray) and Rob Kirwan (U2, Depeche Mode, The Horrors), and the high priestess of mastering, Mandy Parnell. An eastern wind blows over the artwork in the form of Oleg Dou, an up and coming Russian contemporary artist.

There’s still a lot to do from Stockholm to Moscow, going through Brussels too… Victoria+Jean’s journey starts here. Divine Love. For anyone who still doubts it: love is divine.

Trish Melanson lives in the Toronto area with her three boys, Nicholas, Justin, and Eric, her dog Jakkson, and her cats Max and Jagger. She is the former host and producer of Canadian Kickass, a weekly two hour radio show on New Jersey's Chestnut Radio, showcasing Canadian Music. She is also a former Web Content Manager of Indie Soundscapes, an online showcase for Independent Music Artists Worldwide, and was a regular music contributor to The Stroumboulopouli. She is a fervent supporter of the Toronto live music scene. In a past life she was a teacher and Vice Principal in Durham Region. She has many more new and exciting projects waiting in the wings. ;)
RELATED ARTICLES
indieindie week 2015track of the day

by SPILL NEW MUSIC on July 11, 2018
Weep Wave – “Birdhouse” A Spill Exclusive Video Premiere Over the years, the song “Birdhouse”, has developed and evolved, with an ever changing lineup. Birdhouse [...]