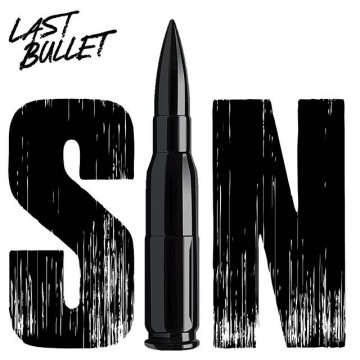 This is badassery at its finest.

Toronto’s Last Bullet finally released their long awaited new single, “Sin”, along with its video.  It was filmed on the top floor of Toronto’s Fairmont Royal York Hotel, which is appropriate because these boys know how to rock the roof off a place.  Last Bullet is about as subtle as Mack truck.Even with driving bass lines, pounding drum beats, and plenty of searingly hot guitar licks, frontman Fontez’ vocals still take centre stage.  Not only is the song funking badass, but you need to watch the video to the end.  I guarantee the last few seconds will make your skin crawl.  As Rogers and Ebert would say “Two Thumbs Up”!

Trish Melanson lives in the Toronto area with her three boys, Nicholas, Justin, and Eric, her dog Jakkson, and her cats Max and Jagger. She is the former host and producer of Canadian Kickass, a weekly two hour radio show on New Jersey's Chestnut Radio, showcasing Canadian Music. She is also a former Web Content Manager of Indie Soundscapes, an online showcase for Independent Music Artists Worldwide, and was a regular music contributor to The Stroumboulopouli. She is a fervent supporter of the Toronto live music scene. In a past life she was a teacher and Vice Principal in Durham Region. She has many more new and exciting projects waiting in the wings. ;)
RELATED ARTICLES
last bulletsintrack of the day

SPILL TRACK OF THE DAY: LAST BULLET – “RUNNIN’ OUT OF TIME”