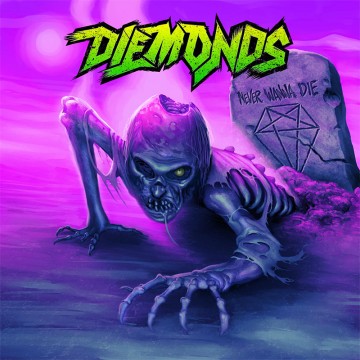 Hot off the presses folks!  And hot it is! Diemonds has just dropped a brand new video for “Ain’t That Kind Of Girl”, the second single from their latest album, Never Wanna Die.  Shot in Las Vegas, it has a lot in common with the Nevada desert – it’s hot, it’s gritty, and it’s pretty goddamn badass.  Don’t believe me?  Check it out yourself.  😉

“Calling downtown Toronto their home, but criss-cross the continent for weeks on end, armed with little more than their brand of original hard rock, their gear and a dream. With their 3rd album ‘Never Wanna Die’ the band continues to modernize their heavy rock n’ roll sound. This time, multiple Juno award-winner Eric Ratz (Monster Truck, Billy Talent) is in the producer chair. Remaining true to their sound, Diemonds takes lyrics that speak to the outcasts, wild childs, and misfits, and combines them with a hard-hitting live show, taking cues from the greats they look up to. Priya Panda, the band’s front woman, is the sultry singer that the music world has never been so poised for. With her larger-than-life presence, she breaks every cultural, social, gender and sexual boundary known to hard rock. If the ever-growing legions of the band’s loyal following are any indication, Diemonds are firmly carving their own path in music and hoards of rock fans are already along for the ride.” .. – from Napalm Records

Trish Melanson lives in the Toronto area with her three boys, Nicholas, Justin, and Eric, her dog Jakkson, and her cats Max and Jagger. She is the former host and producer of Canadian Kickass, a weekly two hour radio show on New Jersey's Chestnut Radio, showcasing Canadian Music. She is also a former Web Content Manager of Indie Soundscapes, an online showcase for Independent Music Artists Worldwide, and was a regular music contributor to The Stroumboulopouli. She is a fervent supporter of the Toronto live music scene. In a past life she was a teacher and Vice Principal in Durham Region. She has many more new and exciting projects waiting in the wings. ;)
RELATED ARTICLES
diemondsnapalm recordstrack of the day