SPILL TRACK OF THE DAY: URVAH KHAN – “GIRATE YA BATTY” 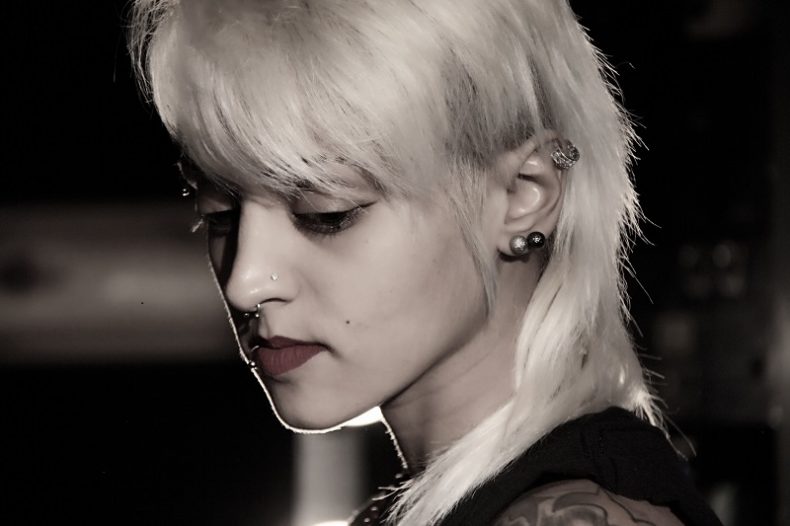 Don’t let her size fool you. Urvah Khan is a giant among women, and that lion knows it. Don’t be fooled — SHE is the master.

Today’s Track of the Day proves yet again that Urvah Khan’s East-Meet-West, No-Fucks-To-Give approach to music’s time has come. Urvah is going places, and that place is up.  The more you listen to this track, the more you will be hooked.  I promise you.

Celebrate 2018 with Canadian Pakistani rocker Urvah Khan​’s new music video for her Metal-Calypso fusion “Girate Ya Batty”. In the west, millions of women are coming forward to reveal the sexual abuse they’ve endured.. (#metoo) I say.. why stop there? Celebrate who you are.. shake what God gave you! “Girate ya Batty” with no shame…

“Scrap,” says Urvah Khan when asked about her sound. “Rock is dead.. we built this from the Scraps.” Urvah Khan is a Canadian Pakistani punk rock performer who has honed her craft in Toronto since 2010. She has developed a unique hybrid sound, fusing heavy rock with South Asian, hip hop & world sounds.

Khan’s music has been featured on Noisey / Vice, BBC radio, Winter X games and she has performed independently at numerous festivals and venues in Toronto, Los Angeles and the UK. She has been admired for her fierce on stage performance; turning heads and demanding attention.

After a short a visit to her country of birth in early 2016, Khan decided to change focus, and introduce her style of rock music; “Scrap Rock,” to a Pakistani audience. “We have a love- hate relationship,” says Khan when asked about the response she has this received thus far. “I’m just here to share my story and my freedom with as many listeners as possible.” Khan and her team have always believed that rock was to be re-born in the east.

Building on the success of her debut Pakistani performance in 2017, and with four power-house releases under her belt, Khan believes now is the time to expand her vision further.

With a new record dedicated to her Pakistani supporters in the works, she has set her sight on returning to Pakistan in 2018, with a live music series of her own, called: “ScrapFest.”

Stay tuned for more updates on Urvah Khan’s journey. Let’s see if this “scrappy l’il brown gal” can go where no woman has gone before!

Growing her sound with Canadian producer/ guitarist Ruben Huizenga since 2010 in Toronto Canada, Khan returned to her country of birth in 2016 and debuted “The Scrap Army” as “Pakistan’s first female-fronted English rock band.”

Through a video that went viral on Facebook, Urvah Khan expressed her intention to return to Pakistan, hold auditions for a full Pakistani line up, and try to grow a platform for more brown girls to get involved in rock music. Not too long after rehearsals began in Karachi, the first lineup was assembled & the debut Karachi show took place at Base Rock Café In January 2017.

The Scrap Army’s sound borrows from a wide range of genres, but the band calls it’s music “Scrap Rock,” a mash-up of Eastern & Western rock music styles. While touring Khan assembles a live band featuring a revolving lineup of musicians.

Trish Melanson lives in the Toronto area with her three boys, Nicholas, Justin, and Eric, her dog Jakkson, and her cats Max and Jagger. She is the former host and producer of Canadian Kickass, a weekly two hour radio show on New Jersey's Chestnut Radio, showcasing Canadian Music. She is also a former Web Content Manager of Indie Soundscapes, an online showcase for Independent Music Artists Worldwide, and was a regular music contributor to The Stroumboulopouli. She is a fervent supporter of the Toronto live music scene. In a past life she was a teacher and Vice Principal in Durham Region. She has many more new and exciting projects waiting in the wings. ;)
RELATED ARTICLES
alternative rockindienew music
8.0

by Robert Defina on August 9, 2019
Snow Patrol Reworked EP1 Universal Music Canada It’s hard to believe that Snow Patrol formed 25 years ago. The ebbs and flows of their international success seem clearly to have hit their [...]
9.0

by Charles T. Stokes on October 19, 2018
Big Bliss At Middle Distance Exit Stencil Recordings If there ever were to be a second post-punk revival, Big Bliss would be its standard-bearer. Anyone looking for a primer on [...]
10