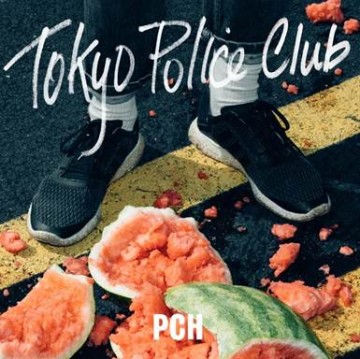 TPC bassist-vocalist David Monk explains, “It was our one day off back in Toronto in the middle of a long, freezing Canadian winter tour and we wanted to spend it doing something ‘non-tour-y.’ We had this song floating around, ‘PCH’, that I had written in LA at one time. I was actually in Malibu when I came up with it, looking out over this crazy huge mountain canyon. I had lots of delay on my voice and this giant melody came out like I was gonna fill that space. So to give us a break from the cold ass winter, we called up our old friend Jon Drew, holed up in his warm studio for a day and recorded a song about a much sunnier place.”

With the 1st installment of a two-part batch of EP’s coming April 8th, ‘Melon Collie and the Infinite Radness (Part 1)’ marks the band’s first release since their enterprising and vaulting 2014 LP ‘Forcefield,’ as well as the 10-year anniversary of their debut EP. The new music sees Tokyo Police Club looking back to the energy and spirit of that formative era while keeping an eye on the future. ‘Melon Collie and the Infinite Radness (Part 1)’ is available for pre-order now.

Last month, the band released “Not My Girl,” which Consequence of Sound describes as “A crisp pop song with a chanting chorus that calls back the best of the band’s cadences.” Culture Collide adds…“A delightful, shoegazey effort, evocative of warm weather and the precipice of adventure.”

TPC will embark on a North American headline tour, which will begin on April 16th in Hamilton, ON and run through the end of June. Fans can purchase tickets at www.tokyopoliceclub.com.

SPILL TRACK OF THE DAY is published daily, showcasing the best in recent independent releases, with a focus on the Toronto Indie Music Scene. We also feature tracks from across Canada and around the World, including Canadian francophone releases. Remember -- you heard them here first. ;)
RELATED ARTICLES
dine alone recordsmean beard recordingsmellon collie and the infinite radness