SPILL TRACK OF THE DAY: MY SON THE HURRICANE – “ROLL WITH THE PUNCHES” 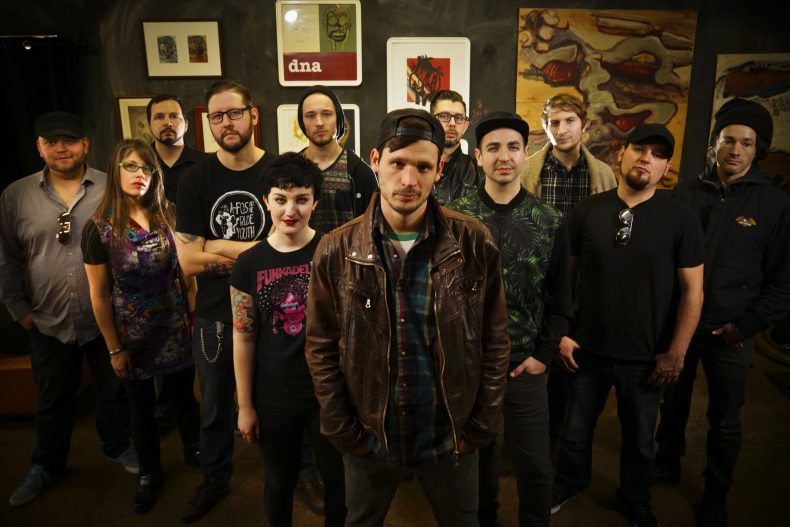 MY SON THE HURRICANE – “ROLL WITH THE PUNCHES”

My Son the Hurricane debut the first track, “Roll With The Punches” feat. Jack Shitt from their upcoming LP, Is This What You Want?! available June 3, 2016.

My Son the Hurricane is a 14-piece brasshop beast with the mantra: anything worth doing is worth overdoing. Hailing from Niagara and Toronto, the band mixes New Orleans style grooves with funk, jazz and hip hop. The new album was recorded at Phase One Studios in Toronto with engineer Jeff Pelletier (Big Sugar, Ludacris).

Riding the success of their sophomore release Cashing a Deadman’s Cheque (feat. U.S.S. frontman Ash Buchholtz and three-time Juno/Polaris nominee D-Sisive), the Hurricane’s ability to seamlessly blend styles, along with their penchant for inciting dance parties, has garnered them high praise on the Canadian festival circuit with breakout performances at Hillside, Beaches Jazz, Scene Fest, Summer Symposium, and more. Leading the show, charismatic frontman Jacob Bergsma “can playfully pluck every nerve in your body with his voice” (Earshot), while the well-oiled rhythm section including 2 trombones, sousaphone, 2 trumpets and 2 saxes creates a spectacle of sound. This is the first release to feature Sylvie Kindree on vocals who adds sassy hooks and acts as a foil to the ever outgoing Bergsma.

Drummer Danno O’Shea acts as ringleader for the mammoth project spurring the group to weave through different styles on the new LP ranging from dance floor bangers to slimy and Primus inspired numbers like “Grapes”, which closes out the album. Is This What You Want?! brings a new flavour to the Hurricane repertoire, building on what makes their sound “a fusion that one simply needs to experience live”.

Further information regarding the release and additional tour dates will be announced in the coming weeks.

SPILL TRACK OF THE DAY is published daily, showcasing the best in recent independent releases, with a focus on the Toronto Indie Music Scene. We also feature tracks from across Canada and around the World, including Canadian francophone releases. Remember -- you heard them here first. ;)
RELATED ARTICLES
roll with the punchestotdtrack of the day

by Aaron Badgley on December 1, 2017
Van Morrison Versatile Legacy Recordings/Sony Music Versatile is Van Morrison’s 38th studio album, and his second album this year. In September Roll With The Punches was released, and now in [...]
6.0