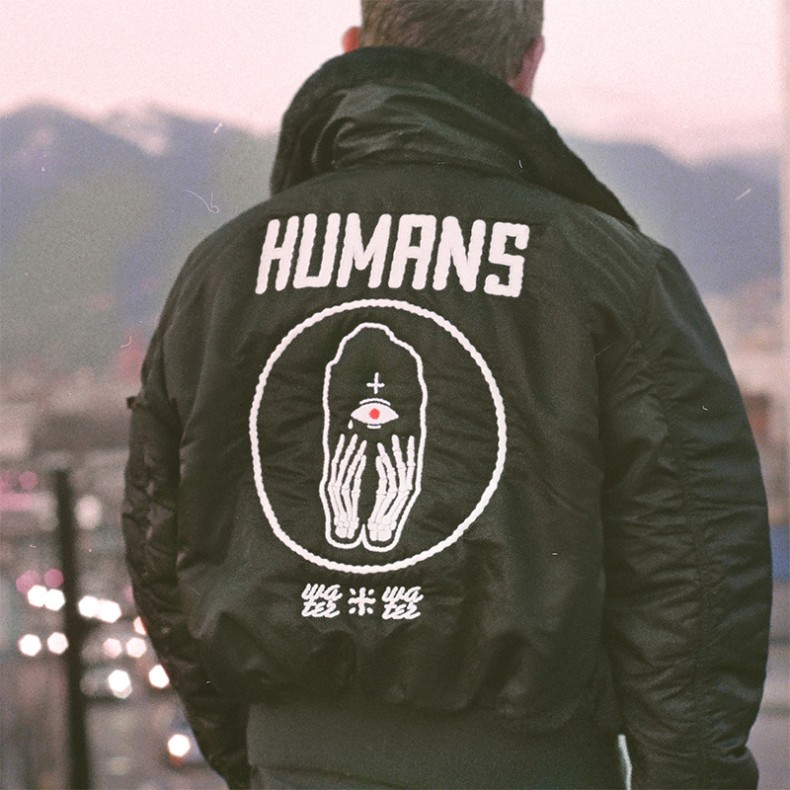 Vancouver-based electronic duo Humans recently signed to Mom + Pop Music (Courtney Barnett, Neon Indian) and released their Water Water EP this month. The EP contains the both versions of Water Water and the hit Bout Chu. Last month they shared with the ten-minute version of ‘Water Water’ which was beautiful, drawn out mix of complex layering and diverse instrumentation. Today the group shares the music video for the single, utilizing the cut down four-minute version of the song. The low-key vibe and ethereal atmosphere are there but the stretched out building of the melody is removed for brevity. The visuals follow the duo around two, both separate, but eventually together. Their iconic Humans jacket is front and center, grabbing your attention and imploring you to follow them through each from. Be sure to catch them on one of their forthcoming tour dates.

HUMANS is a Canadian indie-electronic duo made up of musicians Robbie Slade and Peter Ricq.

Since coming together in 2010, HUMANS has established itself through creating sounds that successfully fuse experimental electronic elements with catchy indie-pop hooks. Focusing on performance and production styles of both the past and present, HUMANS has consistently impressed upon audiophiles with their technical and compositional skills. Using a combination of synthesizers and instruments, the sound has a certain way of being very unique, while not tied down to one specific genre.

The duo’s self-released EP Avec Mes Mecs (2010) captured the blind, wild, captivating joy of unrestrained youth, and seminal lyrics like “Who knew all we had to do was party” quickly made the EP a house party staple. The follow up EP, Traps was released in 2012 with Hybridity Music. The release saw critical acclaim and college radio success, holding the #1 position for 6 weeks on the earshot electronic charts, and ranking in the top ten on BPM. Traps received a 4/5 on Resident Advisor, and the record was featured on XLR8R, Prefix, Indie Shuffle, Spinner, Interview Magazine, Rcrd Lbl, and scored the cover of Beatroute Magazine. Remixes included acclaimed producers Nautiluss and Max Ulis.

In 2013, the EP lead HUMANS on a North American tour including slots at Osheaga, Squamish Valley Music Fest, Bass Coast, SXSW, Shambhala, and CMJ. Their music has been featured in placements with Red Bull, Entourage, CSI, and MTV. When not making music, Slade works on a number of projects including Bass Coast Festival, while Ricq is a well respected indie director and illustrative visual artist.

Their debut LP, Noontide is an evolution of HUMANS carefully constructed, innovative mix of heavy electronics and modern pop sensibilities. The album is a synthesis of time and space, and a testament to the many influences that make up the band’s core. Noontide was released February 24th 2015 via Hybridity Music, one of Canada’s leading independent electronic labels. The album captured the attention of fans and industry alike earning them nominations at Canada’s Junos and Western Canadian Music Awards for “Electronic Album of the Year”.

2016 is set to be a banner year for the duo with their next EP Water Water slated for release on March 4 via New York label Mom & Pop in the USA and Haven Sounds in Canada.

SPILL TRACK OF THE DAY is published daily, showcasing the best in recent independent releases, with a focus on the Toronto Indie Music Scene. We also feature tracks from across Canada and around the World, including Canadian francophone releases. Remember -- you heard them here first. ;)
RELATED ARTICLES
auteur researchhaven sounds inc.humans