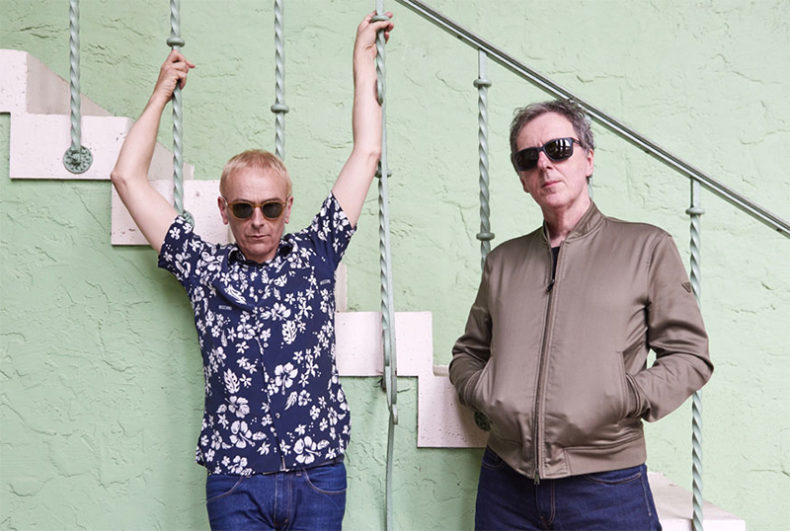 To be released on October 25th 2019, Underworld’s new album DRIFT SONGS marks the conclusion of their hugely ambitious 52-week DRIFT Series. During that period, music, film and text pieces are created and published every Thursday as part of the band’s on-going, very public recording process; a unique and visionary space Rick Smith and Karl Hyde have created for themselves to exist within. By the end of the DRIFT series, more new music and film will have been released by Underworld in its one-year duration than in the last fifteen years.

DRIFT SONGS expands and enhances a selection of the recordings the duo have released since they began their audio/visual experiment in November 2018. The album will be released as a single CD, double vinyl and crucially an all-encompassing box-set featuring the music, visuals and text pieces that were released throughout the entire 52-week duration of DRIFT.

Today, Underworld release Listen To Their No – the first track from DRIFT Episode 4.  Previous DRIFT tracks have featured collaborations with producer Ø [Phase] and Australian experimental trio The Necks.

Earlier this week, Underworld released Soniamode (Aditya Game Version) – which is online everywhere now and is an extended and reframed version of a track originally released as part of DRIFT Episode 2: ATOM. This new version features additional lyrics from UK writer Aditya Chakrabortty – read about the making of and the ideas behind that track here.

DRIFT SONGS is Underworld’s first album release since 2016’s Grammy nominated LP Barbara, Barbara we face a shining future (“an album full of heart, soul and brilliant noise” The Observer) and the first physically released music since 2018’s Q award winning collaboration with Iggy Pop, Teatime Dub Encounters (“Born of the friction from a restless need to create… others of their standing may choose the wallowing legacy of safety. These guys do not.” NME).

Underworld are Rick Smith and Karl Hyde. The press say they are:

“Electronic heroes” The Observer
“Hugely ambitious and unimaginably relentless” Q
“True mavericks” Prog
“Thrillingly relevant” The Times
“(Underworld) boast a breadth and attack largely lacking in contemporary laptop electronica” The Guardian
“The Drift experience is one of a torrent of ideas, with its own internal logic… (where) instinct, experience and chance lead to a strange kind of harmony” Mojo

DRIFT SONGS is available to pre-order now at www.underworldlive.com

Following a summer of headline slots at festivals including Sonar, Latitude, Roskilde, Down The Rabbit Hole, Rock Werchter, Lollapalooza and Vivid (where they play a four-night run at the Sydney Opera House), Underworld play at:

These shows will continue innovations tried and tested at their sold out 2017 Alexandra Palace show where Underworld provide live music from doors to close. Tickets are on sale from 10am BST / 11am CET on Friday 24th May.

SPILL NEWS strives to keep our readers up to date with news and events in the music industry. We keep you informed of the most recent information regarding new releases, tour dates, and information items about your favourite artists.
RELATED ARTICLES
karl hydenewsrick smith
8.0

by Aaron Badgley on November 1, 2019
Underworld Drift Series 1 Smith Hyde Productions/Caroline Records Underworld was born of the ashes of the breakup of Freur in 1988. The duo, consisting  of Karl Hyde and Rick Smith, have [...]