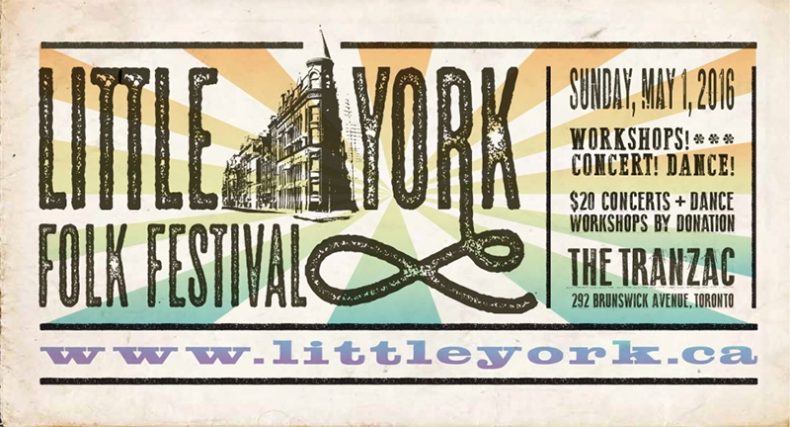 AN EVENT FOR TORONTO’S RICH AND VARIED FOLK AND ROOTS MUSIC COMMUNITIES TO MIX-AND-MINGLE, WITH AWARD-WINNING PERFORMERS, HANDS-ON WORKSHOPS, DANCES AND MORE!

Little York Folk Festival is the brainchild of Toronto-based alt-country songwriter Sarah Jane Scouten. This all-day festival will take place at Toronto’s Tranzac Club on May 1, 2016. The festival brings together many of Toronto’s folk and roots music communities: bluegrass, old time, Cajun, Quebecois, indie-folk, country swing, Americana, alt-Latino/world music and European folk dance will all be represented this year.

This year’s event will establish a template to foster learning, collaboration and
community-building using song and dance as a powerful tool. With an eye for diversity and growth, Scouten plans to incorporate First Nations, African, Caribbean and Asian folk music in the future.

The Little York Folk Festival is a 100% artist- and volunteer-run event.

SPILL NEWS strives to keep our readers up to date with news and events in the music industry. We keep you informed of the most recent information regarding new releases, tour dates, and information items about your favourite artists.
RELATED ARTICLES
folknewsroots
8.0

by Aaron Badgley on September 21, 2018
Abby Zotz Local Honey Independent Abby Zotz has been making music for most of her life. Music has taken her on paths she may not have imagined, but it has been a big part of her life. She has [...]
8.0

by Aaron Badgley on July 20, 2018
Rab Noakes Welcome to Anniversaryville Neon Records Rab Noakes may not be a household name in North America, but in his native Scotland, the man is a revered artist. Here he [...]