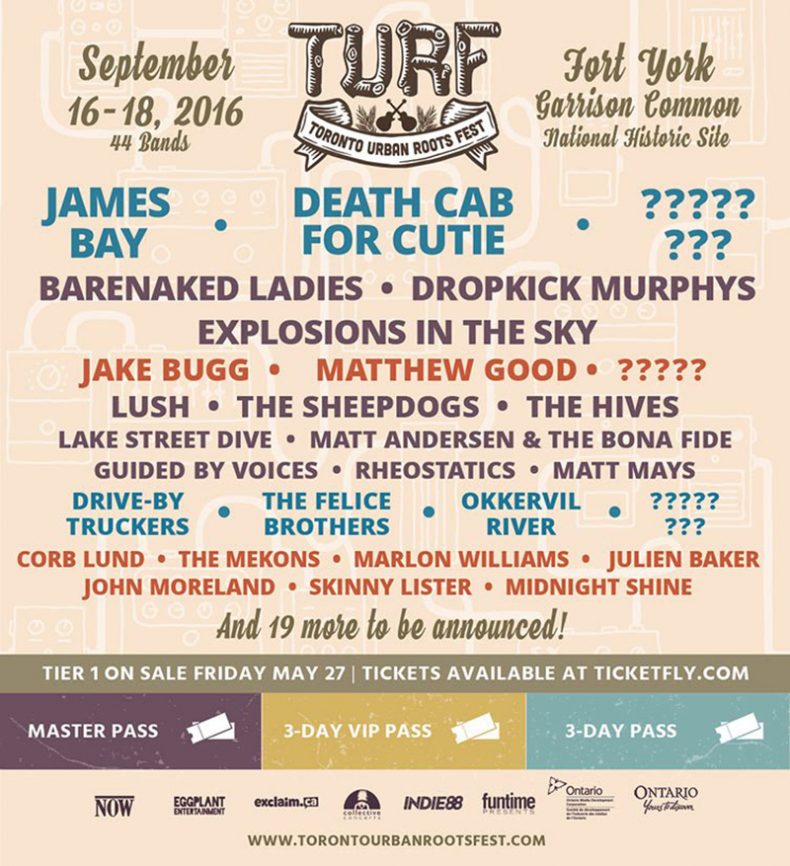 STANDARD TICKETS ON SALE TOMORROW AT THE TURF WEBSITE

An expansion to four stages for the first time in TURF’s short history, its first tented stage, and an invasion to inside the museum’s grounds.

Due to ongoing City of Toronto construction on the Gardiner Expressway, the South Stage is being relocated and divided into two side stages for 2016, the new BATTLE OF YORK STAGE, which will be in the venue parking lot adjacent to the EAST STAGE and partially tented, and the new REBELLION STAGE which will be located inside the grounds of the fort.

TURF will also have a new VIP area in 2016, more exclusive to VIP ticket buyers which gives patrons all the usual amenities plus the front of stage experience at three of the four stages.

In past years, TURF artists guests, sponsors and upgrades got the same VIP amenities but in 2016 these folks get their own VIP but not any front of house privilege which means in 2016 the VIP area will be smaller and more exclusive to actual VIP ticket holders.

TURF’s artistic curation will also see some minor changes in 2016, “Some of the Main Stage programming will be a tad more mainstream and or accessible,” says Jeff Cohen, TURF’s Festival Director. “With the US exchange being what it is we approached a number of radio-friendly, higher level Canadian Artists this year, while at the same time really focusing on more hardcore desert island bands on the two side stages.”

Adds Craig Laskey, TURF 2016 Talent Buyer: “I think the we nailed the 2015 fest in terms of alternative, wow artists on the main stage with Wilco and the Pixies, and this year, I think folks will be equally blown away with what we’ve assembled on the side stages, which includes one European artist that has not played in our city in a decade, and another that hasn’t been here in 20-22 years

TURF was recently nominated for two awards in the first ever Canadian Live Music Awards, both forMedium Festival of the Year, and New Kid on the Block, alongside the Winnipeg Folk Festival,Interstellar Rodeo, Field Trip, and Way Home.

The nominations come on the heels of being nominated by the prestigious Pollstar Awards in the category of North American Festival of Year alongside The Newport Folk Fest and San Francisco’s Treasure Island.

SPILL NEWS strives to keep our readers up to date with news and events in the music industry. We keep you informed of the most recent information regarding new releases, tour dates, and information items about your favourite artists.
RELATED ARTICLES
fort york garrison commonnewstoronto urban roots festival