SPILL NEWS: THE USED ANNOUNCE INTIMATE 2020 TOUR WITH SUPPORT FROM DRAGGED UNDER 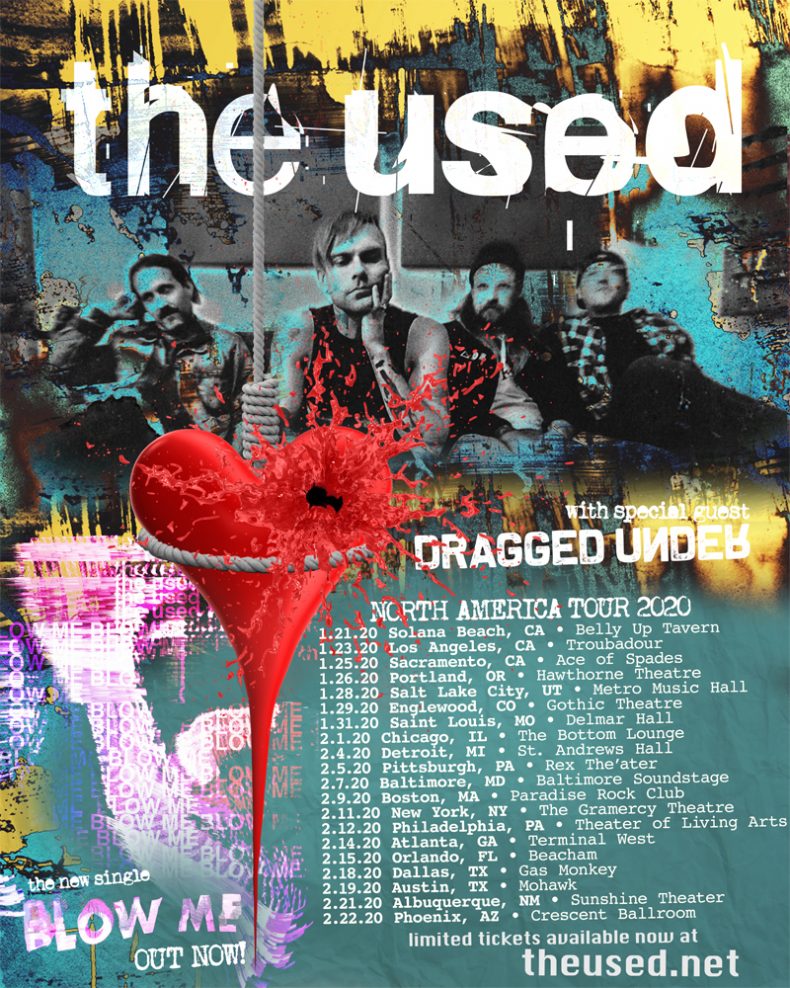 TOUR SUPPORTED BY DRAGGED UNDER

The Used are kicking off 2020 with a very special tour. Starting in Solana Beach on January 21st, the band will be hitting intimate venues for the biggest fans throughout the United States. With these rooms being some of the smallest the band has played in over a decade, tickets will go fast.

Fans can sign up for pre-sale access at TheUsed.net and will be able to purchase tickets tomorrow, December 11th at 10am Local. Tickets go on sale to the general public starting Friday, December 13th at 10am Local Time.

A full list of upcoming tour dates can be found below with more information available at TheUsed.net.

This up close and personal show will be unlike any other Used show you have seen and will be the band’s first time performing their new single “Blow Me (Feat. Jason Aalon Butler)” live. It is frenetic and explosive while showcasing the undeniable vocals of front man Bert McCracken and will absolutely take these small rooms by storm.

The Used are currently finishing up their eighth full-length album due out next year on Big Noise. “They played me some songs and, no bullshit, I got that feeling I felt when I first heard ‘Box Full’ on that comp 17 years ago,” teases front man of Fever 333 Jason Aalon Butler. “For any and all The Used fans – they’re back again. In a BIG fucking way.”

This forthcoming album marks the return of John Feldmann to The Used family as he is producing the album and also the head of A&R at Big Noise.

“I couldn’t be more honored or grateful to have one of my favorite bands of all time at my record label! They are one of the most influential bands of the last 20 years and we are making a career-defining album at the minute,” shares Feldmann. “They are one of the best live bands I’ve ever seen and Bert is quite possibly the best singer I’ve ever worked with. This has been a dream of mine since I met them in 2001.”

Feldmann signed The Used to Reprise Records in January 2002, one short year after the band formed in Orem, Utah. He also produced some of the band’s most monumental albums including their self-titled debut, Maybe Memories, In Love and Death, Lies for the Liars, Vulnerable and Imaginary Enemy. The upcoming album will mark their first release on Big Noise.

SPILL NEWS strives to keep our readers up to date with news and events in the music industry. We keep you informed of the most recent information regarding new releases, tour dates, and information items about your favourite artists.
RELATED ARTICLES
newsthe used