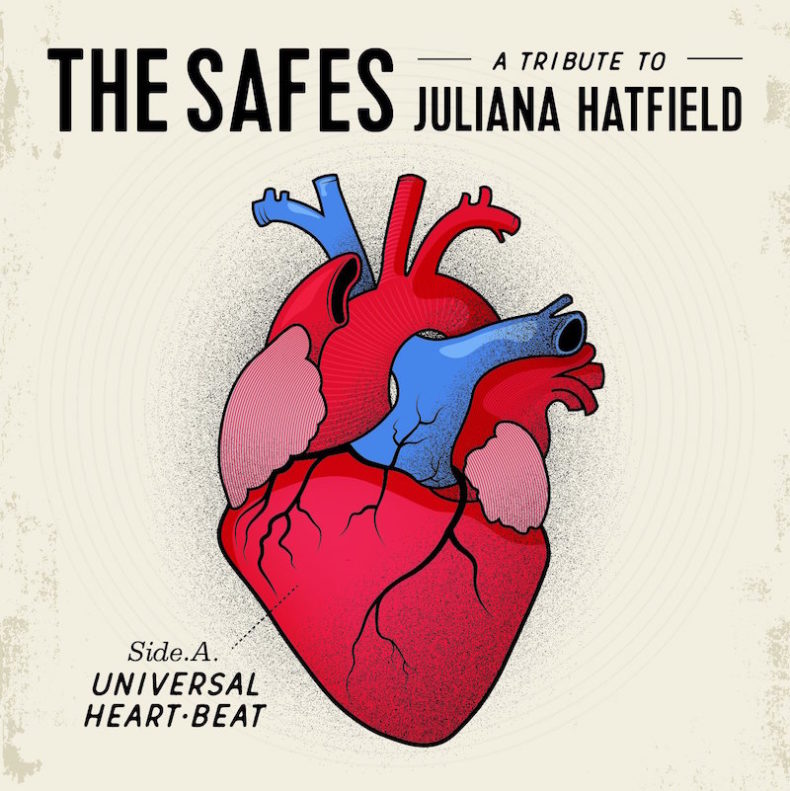 OUT NOW VIA AMERICAN LAUNDROMAT RECORDS, WATCH VIDEOS FOR “UNIVERSAL HEARTBEAT” & “I SEE YOU”

Chicago “atomic pop” band The Safes have released a tribute to Juliana Hatfield today via American Laundromat Records. The record was engineered by the renowned Steve Albini at Electrical Audio. To turn this up to 11, The Safes asked their friends Ted Ansani and Mike Zelenko of Chicago’s one-and-only legendary power pop trio Material Issue to be the rhythm section for this recording. The 7-inch features their cover of “Universal Heartbeat” which was premiered via Popmatters and “I See You” which was released via The Big Takeover.  Purchase the 7-inch here and see below for full fall tour dates.

Sometimes pushing forward full speed ahead, damn the torpedos style in this day and age of TV game show music contests, and being famous before you’ve done anything to become famous, might seem like a waste of time to many people. But it has not stopped Chicago’s too tough to die pop rock ‘n’ roll sensation The Safes! For them touring like it’s 1989 still yields many extraordinary opportunities that they’d never see had they stopped hitting the road to promote their new music!

While touring in 2017 in support of their last LP Tasty Waves, The Safes played a fateful show in Boston one which led to this very interesting and fun opportunity. A good friend of theirs passed along Tasty Waves to Joe Spadro owner of American Laundromat Records (ALR) which started primarily as a tribute record label but has grown to also release new albums for established artists like Juliana Hatfield, Tanya Donelly, among others! On a brief stop home before heading out for their US west coast Tasty Waves run, The Safes were thrilled to receive word that Joe from ALR loved the new album and wanted The Safes to be on his next tribute album! The only problem was the next tribute album he was set to release was Juliana Hatfield doing a full album tribute to Olivia Newton John.

No problem, just leave it to The Safes to figure out a way around waiting for the next tribute! “Hey Joe, what do you think of this idea? No one has ever done a tribute to one of the artists you release new music for. So, how about The Safes record our two favorite Juliana Hatfield songs and do a 7″ double single tribute to one of rock n roll’s all-time greats?” Sounded like a great idea to Joe who was excited to have The Safes track this single with Chicago’s famous recording engineer Steve Albini. To turn this up to 11, The Safes asked their friends Ted Ansani and Mike Zelenko of Chicago’s one and only legendary Power pop trio Material Issue to be the rhythm section for this recording and the rest is rock n roll history! And here you have it – The Safes rocking two of Juliana’s earlier hit singles Side A: “Universal Heat-Beat” from her 1995 Universal Records release Only Everything and Side 1: “I See You” off of Hatfield’s 1992 debut solo album Hey Babe on Mammoth Records which American Laundromat did a 25-year anniversary reissue on vinyl earlier this year!

Give it listen. These songs are as good as songs get; The Safes see no reason in trying to improve upon perfection and opt to just rock these classics out! Guaranteed to please!

SPILL NEWS strives to keep our readers up to date with news and events in the music industry. We keep you informed of the most recent information regarding new releases, tour dates, and information items about your favourite artists.
RELATED ARTICLES
american laundromat recordsjuliana hatfieldnews
8.0