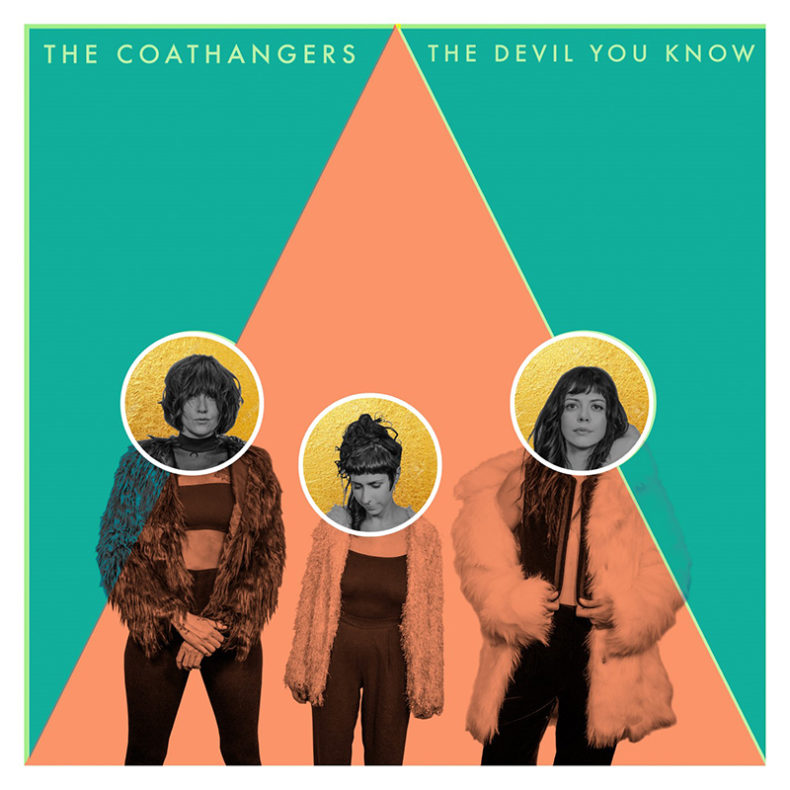 ALBUM OUT MARCH 8 ON SUICIDE SQUEEZE

After 12 years of relentless touring on a steady flow of EPs and LPs, underground rock mainstays The Coathangers took a moment to recalibrate and reconfigure before diving into the creation of The Devil You Know, their new 11 song album due out March 8 on Suicide Squeeze Records. Recognizing that each member had become entrenched in their own style of songwriting (guitarist/vocalist Julia Kugel excelled at the melodic pop songs, drummer/vocalist Stephanie Luke belted out the gritty rock tunes, bassist/vocalist Meredith Franco drove the post-punk and no-wave angles of the band), the trio became determined to meld their established takes on vitriolic punk, playful house-party anthems, and heartworn ballads into a new sound that captured the vitality of their early years while honing their individual strengths into new communal achievements. The result of this newfound discipline, depth, and dimension is the first Coathangers record written as a true unit, as each member learned how to imbue their bandmates’ songs with their own personal touch.

There’s no better demonstration of this reconfigured sound than in the album’s opening track “Bimbo”, where Kugel’s signature sweetness propels the verses while Luke’s shout-along hooks and hammer-fisted drumming dominates the chorus. It’s a pop masterpiece that touches on all the classic Coathanger traits, but delivers them all at once in a fully realized way. “I don’t care what our previous image was. That’s not us now,” Kugel says. “I feel like this is an introduction to what we are now.” Even at their fiercest moments, such as on fiery “F the NRA”, the band never descend to the cacophony they cranked out in their early years. “It’s a conscious anger now,” Kugel says of their harnessed fury. “You’re navigating through it and figuring out your place in all of it, whereas the first record is more of a general statement of ‘I feel mad.'”

Inspired and emboldened by their experience recording Nosebleed Weekend, the band returned to Valentine Recording Studios in Laurel Canyon with Nic Jodoin, who pushed them into increasingly layered and lush sonic territories. The album title stems from an old adage whispered at a friend’s wedding. We settle when we’re afraid of the unknown. It’s a theme that runs through every song on the album: we get comfortable, we get scared, and we refuse to change. But with The Devil You Know, The Coathangers have lost their fear, allowing them to shed the baggage of the past.

Pre-Order The Devil You Know HERE

SPILL NEWS strives to keep our readers up to date with news and events in the music industry. We keep you informed of the most recent information regarding new releases, tour dates, and information items about your favourite artists.
RELATED ARTICLES
newssuicide squeezethe coathangers