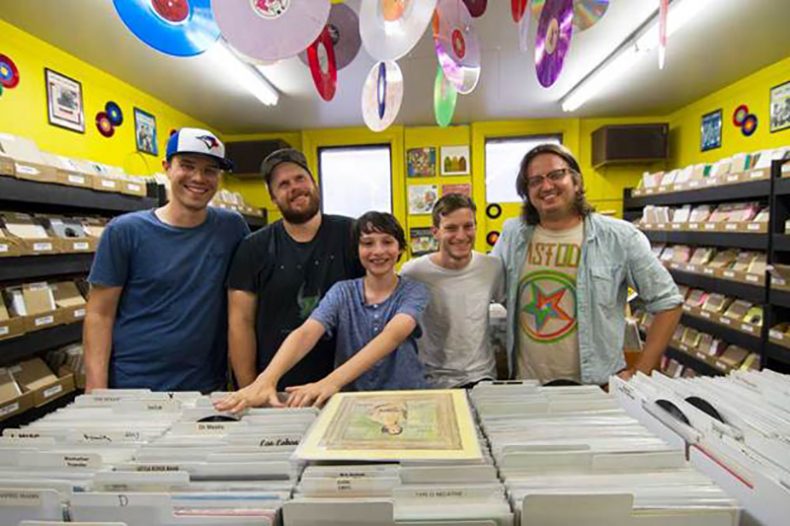 If you remember way back to 2014 when PUP revealed the semi-autobiographical video for “Guilt Trip” from their self-titled album, you’ll have seen actor Finn Wolfhard playing a young PUP vocalist Stefan Babcock in the video. With PUP currently on tour in Europe unable to attend the Polaris Music Prize Gala last night, and Wolfhard finding international success as one of the leads in Netflix’s Stranger Things, he seemed the obvious choice to stand in for the band at the awards gala as he addressed the audience via video.

And so as not to leave an empty table at the gala, PUP also sent their parents to attend the evening’s events, run their social media accounts (#PUPsParentsAtPolaris), and get drunk for them in their place.

Currently on tour in Europe, PUP will be returning to North American for a cross continent tour to end off their trip around the world supporting their latest album, The Dream Is Over. If you were lucky enough to get into either of PUP’s sold out shows in Toronto or Montreal earlier this year, then you were privy to the “thunderous response of yells and fist pumps” and a “frenzy of flailing limbs and floating beach balls” which led Exclaim! to claim “they’re just too relentlessly good onstage.” Canadian tour dates begin October 13. Full tour dates can be found below.

“The Dream Is Over”. They’re the exact words a doctor spoke to Babcock upon discovering his vocal chords had suffered “pretty aggressive hemorrhaging.” Given that the band played over 450 shows in the last two years in support of its self-titled debut, it’s perhaps not surprising that it happened. But by announcing The Dream Is Over the way they did – onstage at a sold-out show in Brooklyn – PUP proved that the exact opposite is true.The Dream Is Over is visible, visceral proof that the dream is still very much alive.

As for that self-aware, tongue-in-cheek album title? “It’s a fuck you to that doctor who told me I may never sing again,” explains singer/guitarist Stefan Babcock. “It’s a fuck you directed at ourselves for every single moment we ever took for granted. And it’s a shotty reminder that shit happens and expectations change but we’re still doing what we wanna do. This is life. This is the fucking dream.”

Since the release of PUP’s self-titled debut, this ferocious four-piece has truly taken the world by storm. They were listed amongst Rolling Stone’s Breakout Rock Acts of 2014, named one of Kerrang’s 20 Hottest Bands In The World Right Now, garnered nominations for three JUNO Awards, including a 2016 Video Of The Year nod for “Dark Days,” which was also shortlisted for the Prism Prize, while The Dream Is Over was short-listed for thePolaris Music Prize.

SPILL NEWS strives to keep our readers up to date with news and events in the music industry. We keep you informed of the most recent information regarding new releases, tour dates, and information items about your favourite artists.
RELATED ARTICLES
cbcfinn wolfhardkillbeat music