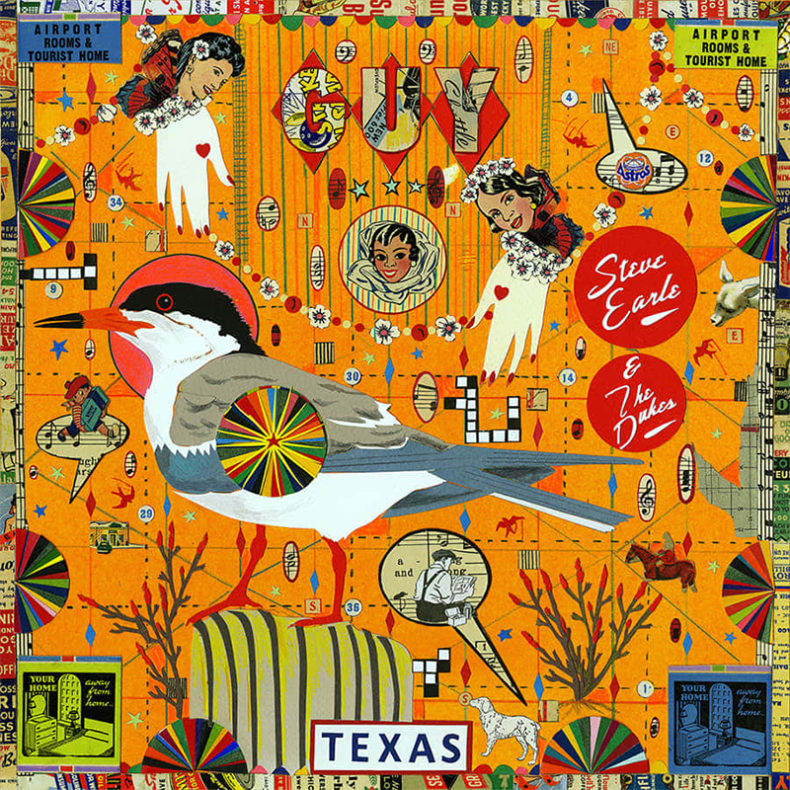 Steve Earle first met Guy Clark after hitchhiking from San Antonio to Nashville in 1974. A few months after his arrival, he found himself taking over for a young Rodney Crowell as bassist in Guy’s band. “No way I could get out of doing this record,” says Earle. “When I get to the other side, I didn’t want to run into Guy having made the TOWNES record and not one about him.”

“Townes Van Zandt and Guy Clark were like Kerouac and Allen Ginsberg to me.”  The mercurial Van Zandt (1944-1997) who once ordered his teenage disciple to chain him to a tree in hopes that it would keep him from drinking, was the On The Road quicksilver of youth.  Clark, 33 at the time Earle met him, was a longer lasting, more mellow burn.  “When it comes to mentors, I’m glad I had both,” says Earle. “If you asked Townes what it’s all about, he’d hand you a copy of Bury My Heart At Wounded Knee.  If you asked Guy the same question, he’d take out a piece of paper and teach you how to diagram a song, what goes where. Townes was one of the all-time great writers, but he only finished three songs during the last fifteen years of his life. Guy had cancer and wrote songs until the day he died…he painted, he built instruments, he owned a guitar shop in the Bay Area where the young Bobby Weir hung out. He was older and wiser. You hung around with him and knew why they call what artists do disciplines. Because he was disciplined.”

“GUY wasn’t really a hard record to make,” Earle says. “We did it fast, five or six days with almost no overdubbing. I wanted it to sound live…When you’ve got a catalog like Guy’s and you’re only doing sixteen tracks, you know each one is going to be strong.

There was another reason, Earle said, he couldn’t “get out of” making GUY.  “You know,” he said, “as you live your life, you pile up these regrets. I’ve done a lot of things that might be regrettable, but most of them I don’t regret because I realize I couldn’t have done anything else at the time. With Guy, however, there was this thing. When he was sick — he was dying really for the last ten years of his life — he asked me if we could write a song together. We should do it ‘for the grandkids,’ he said. Well, I don’t know…at the time, I still didn’t co-write much, then I got busy. Then Guy died and it was too late. That, I regret.”

Like the TOWNES record, GUY is a saga of friendship, its ups and downs, what endures.

Steve Earle is one of the most acclaimed singer-songwriters of his generation.  A protege of legendary songwriters Townes Van Zandt and Guy Clark, he quickly became a master storyteller in his own right, with his songs being recorded by Johnny Cash, Willie Nelson, Waylon Jennings, Joan Baez, Emmylou Harris, The Pretenders, and countless others.  1986 saw the release of his debut record, Guitar Town, which shot to number one on the country charts. What followed was a varied array of releases including the Grammy Award Winning albums The Revolution Starts…Now (2004), Washington Square Serenade (2007), and TOWNES (2009).  A true Renaissance man, Earle has become a novelist, a film, TV, and stage actor, playwright, record producer, and radio host.  Earlier this year, he appeared in the off-Broadway play Samara, for which he also wrote the score that The New York Times called “exquisitely subliminal.”  2018 marked the 30th Anniversary of his legendary album Copperhead Road.  GUY is Steve Earle’s 19th studio album.

SPILL NEWS strives to keep our readers up to date with news and events in the music industry. We keep you informed of the most recent information regarding new releases, tour dates, and information items about your favourite artists.
RELATED ARTICLES
dublin bluesguynew west records
7.0