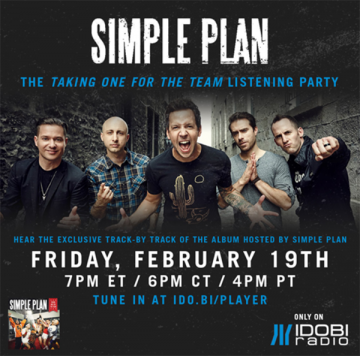 HEAR THE EXCLUSIVE TRACK-BY-TRACK OF THE ALBUM HOSTED BY SIMPLE PLAN: TWEET ALONG USING #TeamSP!

You’re invited to celebrate release day with Simple Plan on idobi Radio! The band will be taking over the airwaves to play their brand new record, Taking One For The Team, in full! The exclusive listening party will be this Friday, February 19th at 7PM ET. Fans will only be able to hear this on idobi Radio. Don’t forget to tune in!

Hosted by Pierre, Chuck, Seb, David, and Jeff, fans will be able to celebrate the release with the guys as well as hear them talk about the influences and collaborations behind every track, the recording process, and much more! The feature is part of idobi Radio’s first ever Fan Appreciation Month, happening now and running until the end of February. To check out what other surprises idobi has in store for fans, head here.

Tune in at 7PM ET exclusively on idobi Radio (ido.bi/player) to hear the new Simple Plan track-by-track premiere of Taking One For The Team!

idobi is the #1 alternative rock digital music stream in the world and is a winner of the “Best Single-Stream Webcaster” at the RAIN Awards. idobi Radio is the #6 internet radio station in the world (#5 commercial), on a list that includes Pandora, CBS Radio, Spotify, iHeartMedia, and ESPN Radio. The station sees an average of 5.5 million monthly tune-ins and serves over 72M ad impressions per month. The idobi Network also includes digital music streams idobi Howl, idobi Anthm, and idobi Electra.

SPILL NEWS strives to keep our readers up to date with news and events in the music industry. We keep you informed of the most recent information regarding new releases, tour dates, and information items about your favourite artists.
RELATED ARTICLES
idobinews