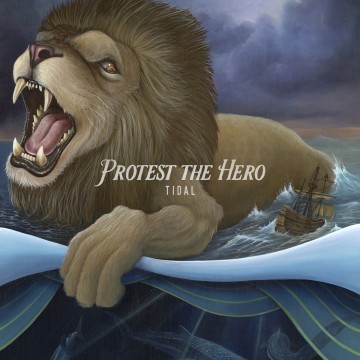 Reveal Teaser Video For Special Documentary Series “Of Our Own Volition”

Protest the Hero have unveiled the new single and artwork from their recently launched 6-month long Pacific Myth subscription service titled “Tidal”.  Known for being progressive not only in their sound but in their music business acumen, the band announced the unique distro model for their upcoming 6-track EP last month.  Structured as a subscription service for fans, Pacific Myth promises to deliver one track on the 15th day of each month over a 6-month period of recording, as well as access to a gamut of original content not available anywhere else.  PTH also recently announced Canadian Fall tour dates.  See below for details on upcoming shows.
The basic concept was to create a subscription-like platform for the band’s music where “subscribers” could enjoy the scheduled arrival of a new Protest the Hero tune every month, on the same day, at the same time. The service is structured in two Tiers: Tier 1 subscribers will access unlimited streaming and various audio formats of the monthly track, an exclusive instrumental mix, hi-res artwork, lyrics, and liner notes.  Tier 2 subscribers will also receive access to a very special documentary series titled “Of Our Own Volition” filmed by award-winning director Marc Ricciardelli.  Watch the teaser for the documentary HERE.

Hailing originally from Whitby, ON, Protest the Hero consists of four core members, Rody Walker (vox), Luke Hoskin (lead guitar/vox), Tim MacMillar (guitar/vox), and Michael Ieradi (drums) alongside their longtime friend Cam McLellan filling in on bass.  The band has always prided themselves on approaching their craft differently than the rest of the pack exemplified in 2013 when their record label contract was up, and they set a precedent by approaching their rabid fan base directly to help fund the recording of Volition.  The band raised a little over $341,000 of their $125,000 goal, surpassing their goal the very first day the crowdfunding page went live.

Check out the video regarding the subscription service here.
For more information, visit the band’s custom FAQ here.

SPILL NEWS strives to keep our readers up to date with news and events in the music industry. We keep you informed of the most recent information regarding new releases, tour dates, and information items about your favourite artists.
RELATED ARTICLES
newsprotest the hero
8.0