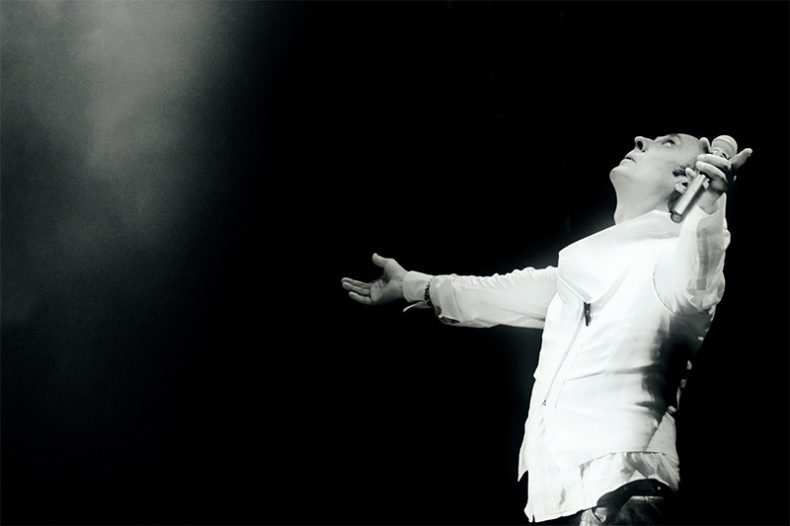 Following the overwhelming popularity of his Stripped Tour in 2016, the iconic Peter Murphy will be releasing Bare-Boned and Sacred, a live album capturing the mesmerizing tour that saw over seventy shows in fourteen countries. It will be released on March 10, 2017 via Metropolis Records.

Recorded at NYC’s Le Poisson Rouge in April 2016, Bare-Boned and Sacred captured a new sound for Murphy, reviving legendary songs to the exposed heart of his voice as never before heard in his epochal stage career, from “Marlene Dietrich’s Favorite Poem” (from his album Deep) to the title track on his latest album, Lion. Vocally as strong as ever, Murphy taps the pulse of his muse as a trio with his longstanding collaborators, guitarist John Andrews and bassist/electric-violinist Emilio “Zef” China. Characterized by Orange County Register as “a semi-acoustic run through his solo career and Bauhaus classics [that offers] its own subtle drama and charm thanks to the strength of the songs and Murphy’s theatrical voice and vision,” Bare-Boned and Sacred covers the spectrum of his oeuvre including a Bauhaus medley of “King Volcano” and “Silent Hedges.”

First emerging from the British punk and rock underground in the late 70s, Murphy (along with bandmates Daniel Ash, David J and Kevin Haskins) fronted the groundbreaking iconic rock band Bauhaus which spawned four iconoclastic and ultra-seminal albums as well as keystone singles “She’s In Parties”, “Silent Hedges”, and, of course, “Bela Lugosi’s Dead” before disbanding in 1983. Murphy launched a successful solo career that has yielded ten solo albums so far, including his latest LION, released in 2014.

Bare-Boned and Sacred will be released on March 10, 2017 through Metropolis Records.

SPILL NEWS strives to keep our readers up to date with news and events in the music industry. We keep you informed of the most recent information regarding new releases, tour dates, and information items about your favourite artists.
RELATED ARTICLES
bare-boned and sacredmetropolis recordsnew music
7.0