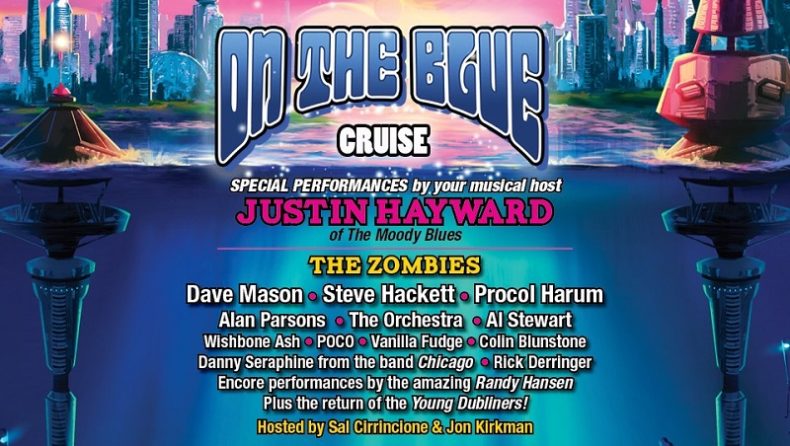 ON THE BLUE Rock Music Cruise features Royalty of Classic Rock! If you missed January’s Moody Blues Cruise, they’ll be doing it again next year!  Sort of.

From February 10-15, 2019, Royal Caribbean’s Mariner of the Seas will host the first-ever On the Blue Cruise, an explosive rock festival at sea hosted by Justin Hayward of the Moody Blues!*  Check out just some of the iconic classic rock bands and artists that will be rockin’ the boat on Justin’s very special five-day sailing:

Musical host Justin Hayward is creating live performances for the cruise, featuring songs from his solo archives along with deep cuts from five decades of material from The Moody Blues. Attendees can expect some familiar faces from Hayward’s Moodies past to join him on stage, along with a variety of Classic Rock legends.

This five-night cruise will set sail from Miami and call at Nassau/Paradise Island, Bahamas and Royal Caribbean’s private island, Labadee.  Fares start at $1,099 per person (double occupancy) plus fees, taxes and gratuities.

*And a little birdie tells us that the Moodies’ John Lodge will also be setting sail as a featured guest on Cruise to the Edge (February 4-9), dedicated to Yes and all things prog…but more on that in about two weeks.

SPILL NEWS strives to keep our readers up to date with news and events in the music industry. We keep you informed of the most recent information regarding new releases, tour dates, and information items about your favourite artists.
RELATED ARTICLES
alan parsonsalan parsons projectdave mason
8.0