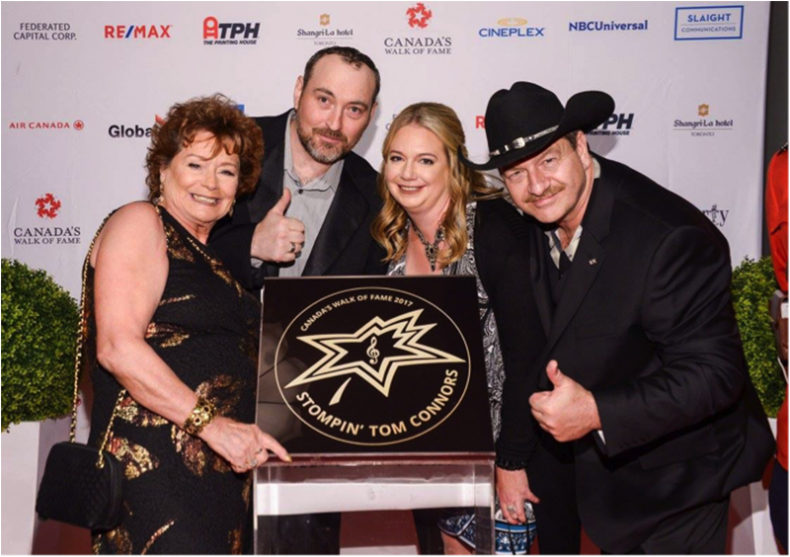 On November 15, one of Canada’s most prolific and iconic artists, Stompin’ Tom Connors, was inducted into Canada’s Walk of Fame during the Beyond Famous Gala at Toronto’s Liberty Grand. The intimate evening featured a Stompin’ Tom tribute video from Ron MacLean and Don Cherry, with a special performance of “The Hockey Song” by Whiskey Jack. Tom Connors Jr. was on hand, along with members of the Connors family, to accept the honour and unveil Stompin’ Tom’s new star that will have a permanent place of display in the streets of Toronto.

“All I can say is happy birthday Canada, we need more Stompin’ Tom’s out there. Do it your own way and don’t ever be told you can’t succeed in this country because we’re all proof here that you can do just that,” said Tom Connors Jr.

“My father as most of you know, was one of the proudest Canadians I ever knew. In his honour I would like to say something that he would have probably said; there is no way that he could have done this without the help of his wife, Lena Connors, sons, family, friends and his band members but, most of all, all of his fellow Canadians across this country,” said Taw Connors.

SPILL NEWS strives to keep our readers up to date with news and events in the music industry. We keep you informed of the most recent information regarding new releases, tour dates, and information items about your favourite artists.
RELATED ARTICLES
newsole label groupstompin' tom connors

by SPILL NEWS on January 10, 2020
WAVELENGTH FESTIVAL CELEBRATES 20th ANNIVERSARY | #WL2020 Wavelength Music warms up winter with the launch to their 20th anniversary year and the Wavelength Winter Festival, [...]