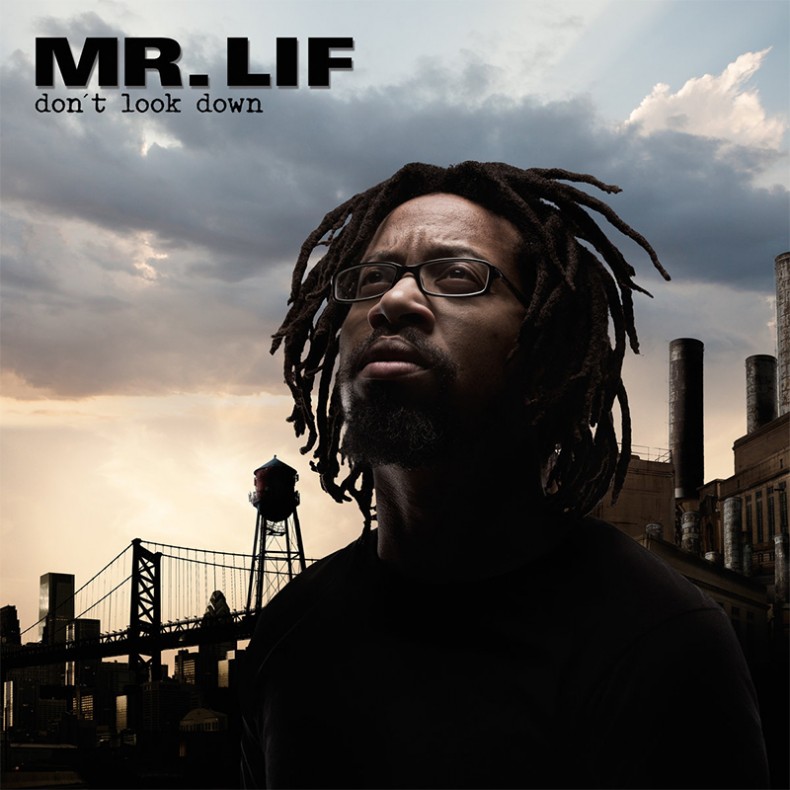 OUT APRIL 15 ON MELLO MUSIC GROUP

Mello Music releases Don’t Look Down, the exciting new album from acclaimed Boston emcee Mr. Lif on April 15th. Listen to Lif rap over psychedelic instrumentals and world beats that sound almost like you’re in the middle of a Persian market place on his new single “Whizdom.”

Mr. Lif reveals, “When Edan played me the beat for “Whizdom”, it spoke to me. I wrote the rhymes while traveling through the UK. Captured the vocals through a golden mic that emanates warm blue light. An extraordinary experience indeed.”

Mr. Lif gained national attention nearly two decades ago when he caught the attention of hiphop label Definitive Jux after leaving Colgate University. He was soon siting in apartments & studios making music with El-P, Aesop Rock, Edan and a slew of other wunderkinds. His debut release, I Phantom reignited the fire for socially conscious and politically aware Hiphop. Mr. Lif went on to become one of Hiphop’s best known live performers and concept album creators.

In 2010, Lif’s beloved studio flooded and he went silent on the solo artist tip. But, far from being inactive, he had teamed up with super-group Thievery Corporation. And, after creating the title track “Culture of Fear” for their album, began touring with them across the globe. The next four years found Lif a seminal member of Thievery Corporations’s live shows around the world. Performing in front of huge crowds at night, by day Lif continued to hone his next batch of solo music, bringing it to his audiophile-level of perfection.

By 2013, Mr. Lif was ready to break his solo artist silence and went on a mission to rebuild his studio. He began to immerse himself in audio technology, studying different microphones, preamplifiers and compressors. Lif became a new version of himself, where he knew every detail about his gear and became dedicated to the perfect signal change that would capture his voice at the highest level.

The artist was a mad scientist in his own laboratory, refining his formula and perfecting his sound. At one point in 2013 he was sitting on 40 demos but by the beginning of 2015 he had created a catalog of new music.

In early 2015, Mr. Lif serendipitously met up with Mello Music Group’s founder in the back of a Seattle bar and within a few months had worked out a multi-album deal, putting in motion the next steps in Lif’s solo career. On Don’t Look Down, Lif jumps in right where he left off with a sharp, tight, cohesive concept album that goes down the rabbit hole into the dark days and shining salvation of an American youth caught in the abyss of unexpected violence.

The new album’s story finds Lif’s protagonist delving into love, heartbreak, weariness, technological insight, political calls to action, and hope for those most lost in the Babylon of contemporary America. The advice: avoid the fall from walk to crawl. Don’t Look Down.

Mr. Lif adds, “The Don’t Look Down album contains many textures. It greets you in the midst of harrowing circumstances; presses you against the walls of anxiety only to give you a greater appreciation for optimism, and hands you a surrealist brush with which to paint the world.”

Don’t Look Down is also the story of Lif’s renewed and heightened passion for the creative process and his launch forward into this new era of releasing his music. It’s called “Rebuild, Reinvent, Reignite.” Lif explains, “I Rebuilt my studio, I reinvented myself as an artist and I reignited my mission to reach people through purposeful and sincere music.”

SPILL NEWS strives to keep our readers up to date with news and events in the music industry. We keep you informed of the most recent information regarding new releases, tour dates, and information items about your favourite artists.
RELATED ARTICLES
del the funky homosapiennews