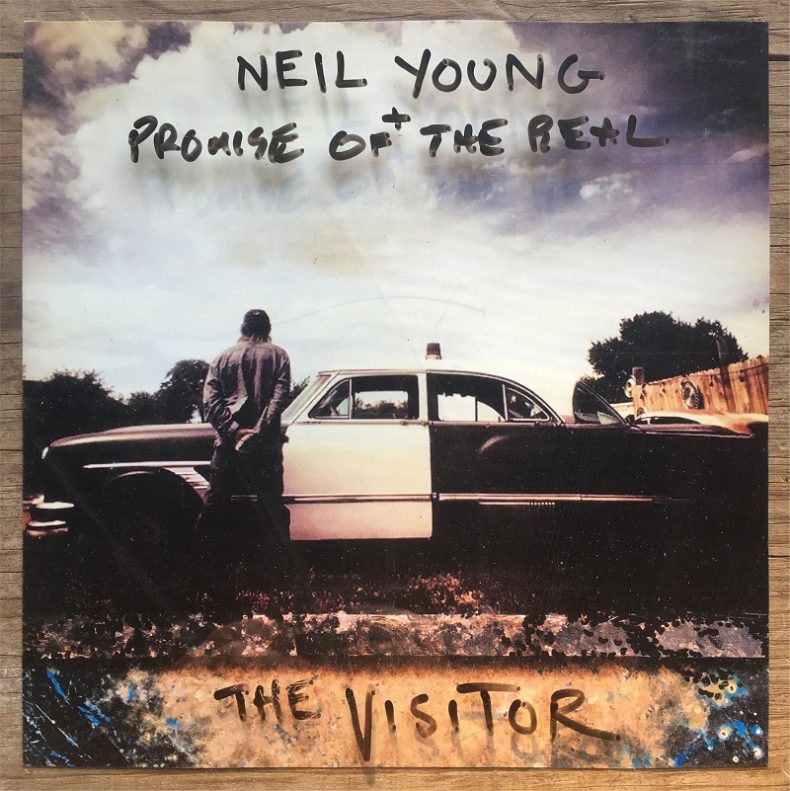 Neil Young + Promise Of The Real will release their new studio album The Visitor [Reprise Records] on Friday, December 1, 2017 in stores and via all digital music retailers. The vinyl edition will follow on on January 5, 2018. The digital pre-order grants an instant grat download of the new track “Already Great.” Click here to pre-order The Visitor.

When Neil Young entered Shangri La Studio with the band Promise Of The Real a few months ago, there were a lot of images and feelings careening around his soul. The country was heading in a direction Young had never seen, even though up until then he thought he’d seen it all. But something different was happening, and it had gotten inside his music. “I’m a Canadian by the way and I love the USA,” he sings on the first song “Already Great.”  The ethos of The Visitor can be summed up in the refrain of “Already Great” where Young insists, “Already great, you’re already great. You’re the promise land, the helping hand. No wall. No hate. No fascist USA. WHOSE STREET? OUR STREET.”  From those words, Neil Young was ready to take a musical journey on his new album The Visitor like he had never taken before. It was one where he’d even surprise himself, always the mark of a creative leap. By the end of the recording sessions, he knew he’d made his most diverse album going all the way back to Harvest in 1972, when America was also in the throes of becoming unhinged. Neil Young didn’t blink then, and he is not blinking now.

The Visitor is an intriguing and always exciting peek into the mind and heart of one of rock & roll’s true seekers. Neil Young has wandered a wide path since coming to Los Angeles from Canada over 50 years ago. During those many decades he has established an immediately apparent individualism that cannot be predicted. Young has often said that when things become ordinary, he’s ready to shake things up and head for new ground. It has always been what marks Young’s music. His new songs, whether it’s a mashup of spoken word and rock & roll on “Fly By Night” or the heart-stopping beauty of “Forever,” once again ask listeners to stay open and ready for whatever comes through the open channels of the man and his unstoppable band.

Listening to an album like The Visitor is not unlike taking off on a cross-country trip without a map. There is no way to tell where the destination will lead or what will be encountered. At one moment the savage rock of “Stand Tall” lead into Caribbean and Latin musical strains rising through on “Carnival,” only to turn around to embrace the blues on “Digging a Hole.” There is also the modern funk-rock of “When Bad Got Good,” the anthemic “Children of Destiny” and the spirit-tugging strength of “Change of Heart” to ensure the musical travels remain full of wonder. With the unlimited ability of Promise of the Real, featuring Lukas and Michah Nelson along with Corey McCormick, Anthony Logerfo and Tato Melgar, the passionate power of their playing pushes the songs to maximum expression. There are very few rock bands now who can go to as many places as this outfit and always deliver their own distinct identity.

The closing song on The Visitor feels like a prayer for today and tomorrow. In “Forever,” Neil Young sings “Earth is like a church without a preacher, the people have to pray for themselves.” These lines, and everything else on this landmark release point to the future in a way that sounds the alarm for troubled times but at the same time offers hope that, once again, music can help lead the way to understanding and hopefully a better place.

Today Neil Young walks in his own footsteps, just as he has done since his first days venturing into neighborhood clubs in Canada when he was still a teenager. He has a guitar, he has a voice and he has songs that express a unique way of looking at the world. And once again he is ready to tell us where we’ve been and just maybe where we might be heading. By listening we can join together and share the challenges and find a way forward together. Once again.

Side 2
Change Of Heart
Carnival
Diggin’ A Hole

Side 3
Children Of Destiny
When Bad Got Good
Forever

SPILL NEWS strives to keep our readers up to date with news and events in the music industry. We keep you informed of the most recent information regarding new releases, tour dates, and information items about your favourite artists.
RELATED ARTICLES
neil youngneil young & promise of the realnews

by Bryan Williston on July 5, 2018
INSPIRATION, MOVING FORWARD, AND INVOKING THE DEVIL A CONVERSATION WITH DAVID CLAYTON-THOMAS Woodstock headliner. Grammy [...]
8.0