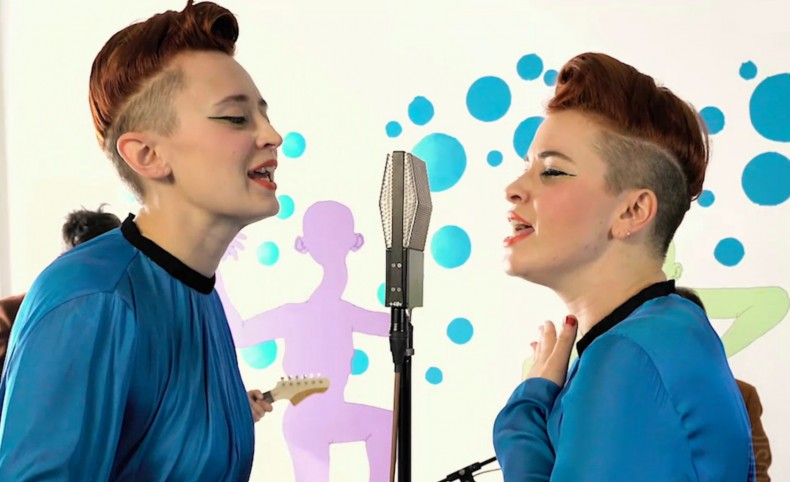 The newest Baeble Next Session features Lucius performing songs from their sophomore album Good Greif. The girls have a unique ability to swan dive ever so gracefully into the vocal complexities, emotions, and various colors of their songs.

After spending the last two and a half years on the road, supporting their debut album Wildewoman, the band got to sit down and work through the material they had for Good Grief. “It was heavy material,” laughed co-vocalist Holly Laessig. “When we sat down to get into it, we thought…should we just start with something light?  An appetizer or something?” As it turns out, that aperitif ended up being “Born Again Teen”. The insanely joyous single, feels like the blast of a confetti cannon. While playing through that single as well as “Dusty Trails”, “Madness”, and “What We Have (to Change)” in this session, it’s obvious that Jess and Holly remove themselves from whatever moment they occupy when they sing.

“Growing up we both were looking to escape in a certain way…trying to figure out what it was we wanted to be and not exactly fitting in. Coming to a show definitely enables [a similar] experience for other people. It’s fun and energetic and we’re hopefully transporting people along with us.”

This Baeble Next Session with Lucius is your ticket to ride! Watch it now on the Baeble site or via the Baeble Music app. To learn more about Lucius visit their website.

SPILL NEWS strives to keep our readers up to date with news and events in the music industry. We keep you informed of the most recent information regarding new releases, tour dates, and information items about your favourite artists.
RELATED ARTICLES
good griefluciusnews
8.0