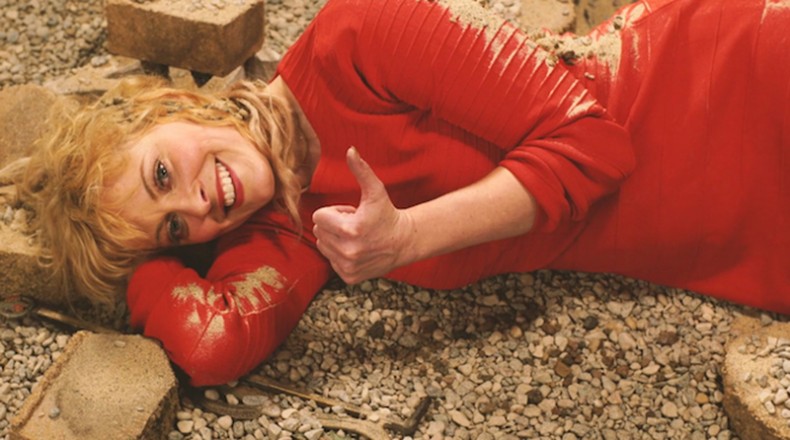 On May 6, Little Scream will release Cult Following on Dine Alone Records in Canada. The video for the album’s first single, “Love as a Weapon” is directed by Dan Huiting. The video is appropriately vivid for a song that features emotional directives via dance call. The clip effectively captures the essence of the song that The Line of Best Fit describes as a “scorchingly optimistic venture of blissful enthusiasm that’s impossible to not be elated by.”

“This video is a glimpse into my stream-of-consciousness brain,” says Huiting. “When I first listened to the song, I instantly had all these random ideas, like gold painted hands doing ASL, aerial shots of Laurel walking down a snowy barren road, a band performing against a backdrop of light tubes, etc., so I was really excited when Laurel and I were bouncing ideas back-and-forth that she was into all of the crazy set ups I had in mind, and also into the idea that instead of having to explain everything, we would just make these little visual landscapes and let them be what they are, fun and random, because that’s what the song feels like to me.”

Little Scream, a.k.a. Laurel Sprengelmeyer, says she began conceiving of Cult Following while visiting a friend in a small intentional community in northern Brazil that was on the verge of becoming a cult. “People were running around reading auras, interpreting each other’s dreams, and ‘living on light’ instead of eating—which was as compelling as it was absurd. I became very aware of the entropy of belief. You could feel the magnetism of ideas take shape and pull people into their center like a black hole… a thing so filled with light that its own gravity means that none of it can escape.” That experience laid the groundwork for Cult Following, a lush, expansive, retro-­leaning gem.

Little Scream will tour with Thao & The Get Down Stay Down and Land Of Talk in April with more dates coming soon. Full tour dates can be found below.

SPILL NEWS strives to keep our readers up to date with news and events in the music industry. We keep you informed of the most recent information regarding new releases, tour dates, and information items about your favourite artists.
RELATED ARTICLES
cult followingdine alone recordslaurel sprengelmeyer