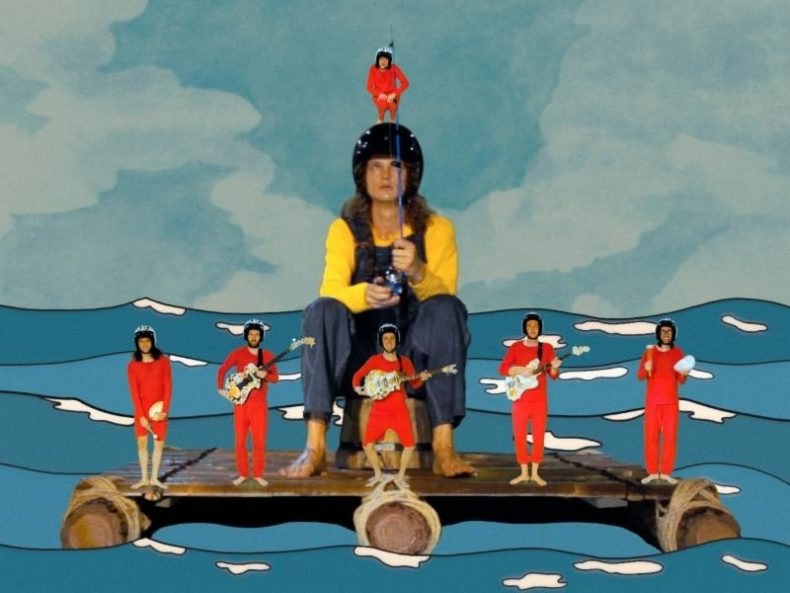 Following the January release of “Cyboogie”, a stomping electro-shuffle, and the title track from their upcoming album Fishing For Fishies earlier this month, Australia’s King Gizzard & The Lizard Wizard have shared another track from the upcoming record, called “Boogieman Sam”. Fishing For Fishies will be released April 26 on ATO/Flightless Records. Pre-orders for the new record are currently available HERE.

King Gizzard will embark on a massive North American tour in August, including dates in Toronto, Montreal, and Vancouver. Tickets for all dates are now on-sale and all tour dates are below.

Sit back and strap yourself in as seven-headed Aussie rock beast King Gizzard & The Lizard Wizard return with Fishing for Fishies, perhaps their most perfectly-realized album to date. Here is a world where the organic meets the automated; where the rustic meets the robotic. Where the past and future collide in the beautiful present.

The fourteenth album since their 2012 debut – and their first following the release of five vastly different albums in 2017 – Fishing for Fishies is a blues-infused blast of sonic boogie that struts and shimmies through several moods and terrains. From the soft shuffle Outback country of the opening title track through the sunny easy listening of ‘The Bird Song’ (think the lysergically-soaked Laurel Canyon circa 1973) and on through the party funk of ‘Plastic Boogie’ (which somehow summons the spirit of Stevie Wonder’s Innervisions) the road-trucking, Doors-like highway rock of ‘The Cruel Millennial’ and ‘Real’s Not Real’ – what The Carpenters might have sounded like had they existed entirely on vegemite and weed – it’s a dizzying, dazzling display.

Hell, The Gizz make it look so easy.

And that’s all before we even get to ‘Acarine’, a futurist blues tune which heads off into previously unchartered territories of shimmering Eno-esque ambient and dark John Carpenter-style electro, and the electro squelch of album-closing single ‘Cyboogie’, on which five of the seven King Gizzard & the Lizard Wizard members play synths. It’s a stomping vocoder-lead anthem akin to Georgio Moroder or Trans-era Neil Young and a triumphant conclusion to an album that is as surprising as it is thrilling, as unexpected as it is effortless.

“We tried to make a blues record,” says frontman Stu Mackenzie. “A blues-boogie-shuffle-kinda-thing, but the songs kept fighting it – or maybe it was us fighting them. Ultimately though we let the songs guide us this time; we let them have their own personalities and forge their own path. Paths of light, paths of darkness. This is a collection of songs that went on wild journeys of transformation.”

“I didn’t really know who I was by the end of 2017,” continues Stu, of the band’s never-to-be-repeated year, which concluded with the fifth album being released on New Years Eve 2017. “It was a good kind of spent feeling though, as I like being busy. For most of the holiday period I was in the studio doing the last of the recording and mixing on Gumboot Soup. And as soon as it clicked over to 2018 I stopped worrying about recording for a while and started living instead.”

Out of this period came Fishing for Fishies, an album in which musical motifs recur: lush piano, mellotron and synth flourishes (the bulk of the album was written on piano); Ambrose Kenny-Smith’s distinctive harmonica, which brings to mind sidewinders crossing dusty widescreen vistas; a generous dose of vocoder; and a plethora of creative U-turns that conspire to create a general overall sense of man and machine melding together in a thrilling chrome-covered hybrid.

Because Fishing for Fishies is an album looking out across the horizon through mirrored sunglasses while twenty-ton juggernauts thunder past. Here, perhaps, is a place where the spirit of two key songs released in the same year – Ram Jam’s ‘Black Betty’ and Kraftwerk’s ‘Trans-Europe Express’ – linger somewhere in the mix. And what may sound absurd on paper is actually the genius work of a band of musicians entirely simpatico with one another after nearly a decade of constant evolution.

“We have traveled a lot – we’ve seen the world – but it all still feels like discovery,” says Stu, in trademark self-effacing style. “We’re still essentially naive kids tinkering around with toys we don’t know how to use in the studio.”

Newcomers to King Gizzard & The Lizard Wizard will find an entire self-contained universe awaits them in a thrilling body of work. Here are grand concepts where albums overlap, riffs resurface, circular songs chase their own tails, grand narratives are told, cryptic lyrics endlessly analysed and a whole army of fans regurgitate the band’s output via a deluge of remixes, memes, visual loops, mind-melting cut-ups and just generally pontificate wildly about everything in The Gizzverse, much of it available on Youtube and internet forums.

“I am aware that it exists,” laughs Stu, of the alternative world that exists in their honor. “But I’m completely social media-less and pretty stone-age really. Good on ’em for digging deep though.”

Because King Gizzard are no longer a band, they are a cult, a youth movement, an exploration, a double-drumming trip, a cottage industry centred around their own Flightless Records. Many milestones have been ticked off along the way: a headline slot at the UK’s Green Man Festival; a huge sold-out US tour; playing to five thousand people at a sold-out Brixton Academy one day…and then 100 people in the Yorkshire hill town of Hebden Bridge the next. Meanwhile their Gizzfest gathering in Melbourne is now in its fourth year. They are a band to give your life to. Perhaps more than anything they provide transportive fun,a valuable and often-overlooked commodity in an increasingly fraught world.

Best of all, anyone can step into The Gizzverse – anytime, anywhere. No prior understanding is necessary. So whether it’s psyche rock played with breakneck precision (2014’s I’m In Your Mind Fuzz),life-giving acoustic folk and Tropicalia (2015’s Paper Mâché Dream Balloon), a three-part sci-fi/prog album (2017’sMurder Of The Universe) or an album uploaded on an open license so that budding labels worldwide could press their own copies, which they duly did, currently 240 different pressings according to Discogs (2017’s, Polygondwanaland), King Gizzard & the Lizard Wizard provide it. As Pitchfork noted, they have waged war against two tired clichés: “One, that rock is dead; and two, that the album is dead.”

More than that, they have staked their claim as one of the most innovative, exciting and productive bands of the 21st century

SPILL NEWS strives to keep our readers up to date with news and events in the music industry. We keep you informed of the most recent information regarding new releases, tour dates, and information items about your favourite artists.
RELATED ARTICLES
ato recordsfishing for fishiesflightless records