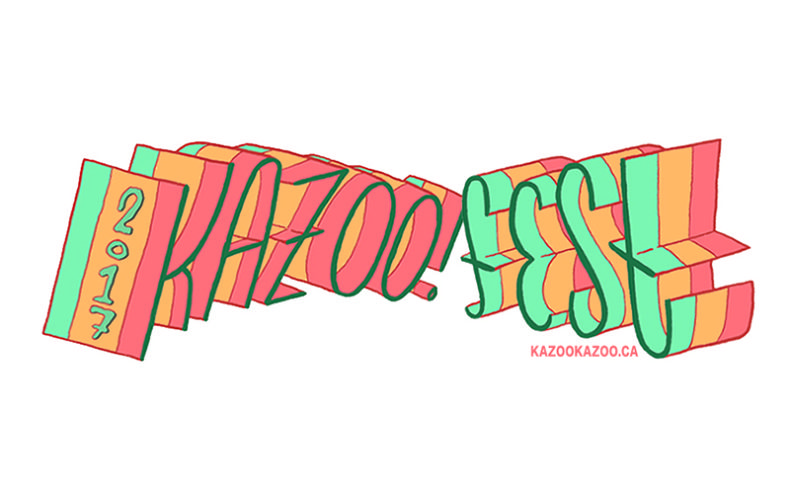 Kazoo! Fest returns by celebrating their 10th anniversary with their most diverse line-up, dance and art showcases to date. With a carefully curated lineup of some of the strongest independent music from Canada and abroad, Kazoo! will transform downtown Guelph into a hotbed of music and art for five action-packed days. From April 5th to 9th, the festival will showcase over 40 musical performances, visual art, multimedia art installations, the Kazoo! Print Expo, contemporary dance, and more.

This year’s music lineup will feature artists from across Canada. A few highlights include a rare performance from Canadian icons Constantines, newly Juno nominated post-punks Weaves, Polaris short-listers Jessy Lanza and U.S. Girls, cult songsmith John Southworth, as well as a much anticipated album release by Guelph’s very own Richard Laviolette. The lineup will also include a performance from Xylouris White, a duo based in Greece and Australia combining traditional Greek music with post-punk experimentalism. 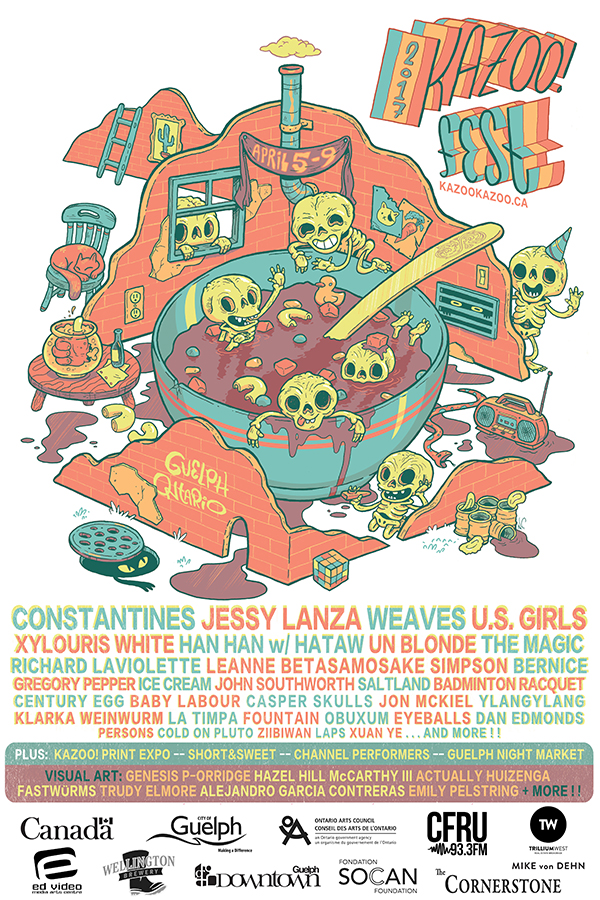 Kazoo! Fest will also feature a set by Filipino-Canadian rapper Han Han who will be performing a set with the HATAW dance crew. The weekend will also see performances from some of Canada’s most exciting up and coming bands including Halifax’s Century Egg, Toronto’s Casper Skulls, and Montreal’s Fountain. The full music lineup will, as always, also include a selection of Guelph’s best new artists including Cold On Pluto, Emily Mikhaela & Ian Bain, Softside, Luyos MC, and Snake Church.

Presented in partnership with Ed Video Media Arts Centre, Kazoo! Fest will include a curated visual and media arts program featuring an array of internationally recognized artists including Genesis P-Orridge, Hazel Hill McCarthy III, Actually Huizenga, FASTWÜRMS, and more. A series of these exhibitions will be hosted in the Kazoo! HQ warehouse space in downtown Guelph.

Kazoo! Fest will also debut the results of the 4th annual installment of the Look Hear! Micro-grant, an original mixed-media presentation commission by Kazoo! Fest and Ed Video Media Arts Centre. 2017’s Look Hear! presentation will be a multimedia performance by local artists Samantha Cardow, Denise Nouvion, and Evan Abeele who will be working on a new multimedia performance called “FEED”. A full visual art, multimedia installations and special projects program announcement will be made shortly.

SPILL NEWS strives to keep our readers up to date with news and events in the music industry. We keep you informed of the most recent information regarding new releases, tour dates, and information items about your favourite artists.
RELATED ARTICLES
guelphnews

by Br. on September 28, 2018
BUMPS AND SCUFFS A CONVERSATION WITH TRAGEDY ANN Guelph-based folk duo Tragedy Ann offer their listeners and interviewers alike a unique blend of authenticity and [...]

by SPILL NEW MUSIC on September 6, 2018
THE WAVERLYS – “GOOD GIRL” A Spill Exclusive Video Premiere Guelph/Toronto duo The Waverlys are releasing the video for their single “Good Girl” from their [...]

by SPILL NEW MUSIC on May 21, 2018
THE NAMEDROPPERS – MY FUNNY HYPOCHONDRIAC A Spill Exclusive Album Premiere The Namedroppers – A Jazz-Punk group from Guelph and Toronto—stick out like a bloody [...]

by SPILL NEW MUSIC on February 12, 2018
CROWN & JESTER – ONE A Spill Exclusive Album Premiere Fresh from the Guelph scene is Crown & Jester with his debut album, “One”. The former bassist for Southern Ontario hardcore [...]