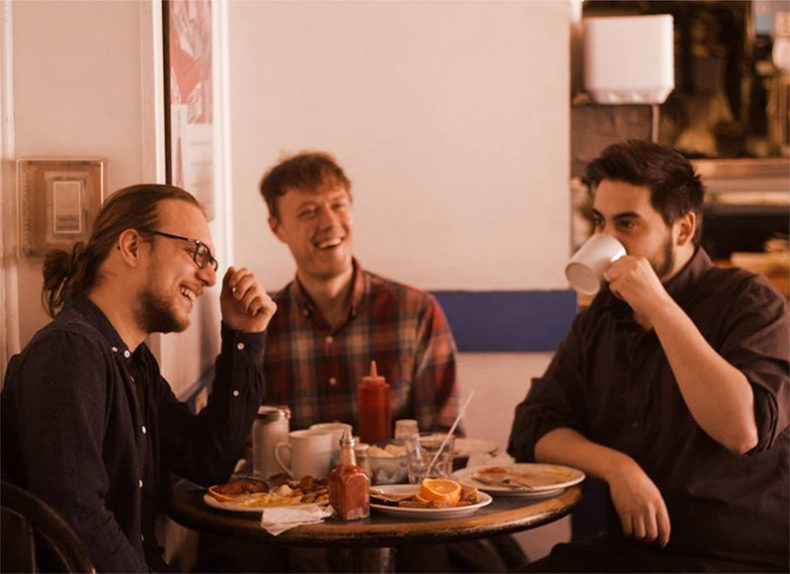 Soulful, jazz/funk Hammond B3 organ trio JV’S BOOGALOO SQUAD has a debut single “SQUADZILLA” (Flatcar Records, Fontana North) out now and available on Spotify, Apple Music / iTunes, Tidal, and wherever music is streamed or downloaded. The single is from their soon-to-be released debut album GOING TO MARKET which is also now available for pre-order. Stay tuned for more on the upcoming album.

“They put on a fantastic show, demonstrating musicianship of the highest quality and excellent engagement with the audience – this is a group of musicians who take their craft seriously, but know how to have a good time.” ~ Josh Grossman, TD Toronto Jazz Festival

Winnipeg native and now in-demand Toronto keyboardist Joel Visentin, joined up with hip, on-the-scene musicians, guitarist Adam Beer-Colacino and drummer Jeff Halischuk, to form JV’s Boogaloo Squad, in 2015. The musical connection was immediate and electric, the chemistry palpable, and all three instantly recognized that they had stumbled on something greater than the sum of its parts. They have since honed their vintage yet modern sound on the club circuit in Toronto, becoming a regular fixture at The Rex, as well as playing festivals like the Markham Jazz Festival and the TD Toronto Jazz Festival. In Markham, they had the great fortune of playing before living jazz organ legend Dr. Lonnie Smith.

“A dedicated and engaging group of musicians. They display a high level of musical ability while remaining accessible and fun for a wide range of music lovers.” ~ Sarah Kim Turnbull, Markham Jazz Festival

The group crafts a soulful sound that is simultaneously lost in the thrill of the moment while evoking a timeless musical nostalgia, as evidenced in the new single. “Squadzilla” is an uptempo funk anthem with that classic Hammond B3 jazz organ sound, leaning into the funk with drummer Jeff Halischuk holding the groove along with superbly executed congas by percussionist Michel Dequedo. The dynamic horn lines shine on while guitarist Adam Beer-Colacino, saxophonist Kelly Jefferson, and organist Joel Visentin solo impeccably throughout. The whole thing percolates at a winning pace. Visentin says, “For this tune I wanted to show that while JV’s Boogaloo Squad is a tight, fun unit, we can also be larger than life.”

SPILL NEWS strives to keep our readers up to date with news and events in the music industry. We keep you informed of the most recent information regarding new releases, tour dates, and information items about your favourite artists.
RELATED ARTICLES
flatcar recordsfontana northgoing to market