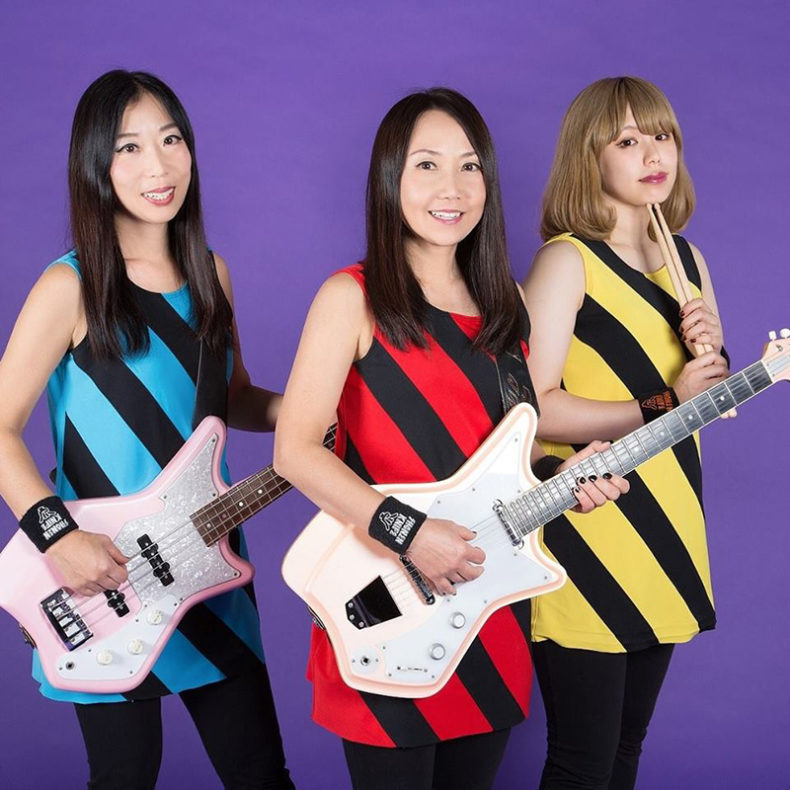 LIVE DVD, ALIVE! IN OSAKA, OUT MAY 4th VIA GOOD CHARAMEL RECORDS

Japanese punk legends, Shonen Knife, have partnered with idobi to premiere a video for “Riding on the Rocket” – a live preformance off their upcoming Live DVD, ALIVE! In Osaka (Out May 4th).

idobi raved about the band saying, “When a band can get everyone from fifteen to fifty year olds into the mosh pit and singing along you know you are witnessing something special. Fast forward to 2018 and that same infectious energy is as strong as ever in Shonen Knife’s new video for their song “Riding The Rocket”.”

Frontwoman Naoko explained her inspiration for the song exclusively to idobi, “When I was a child, I often played a Japanese card game ‘Karuta’ in new year holidays. My Karuta was for children’s learning. The theme of mine was ‘Space’. Each card has sentences about space, like ‘I want to go to the moon’ or ‘Saturn has a ring’. I learned that Pluto is the most faraway planet. It isn’t a planet anymore, though. Anyway, I was interested in Pluto and wanted to go there with my blue eyed cat.”

Shonen Knife will be releasing ALIVE! In Osaka via Good Charamel Records in North America, Europe and The UK on May 4, 2017. A U.S. tour is planned for later 2018.

The DVD/CD package was recorded live at Juso Fandango in Osaka, Japan in December of 2017 and includes 21 tracks from the band’s three decade plus long career as Japan’s most loved Indie rock import.

Featuring classics such as “Twist Barbie”, “Bear Up Bison” and “Sushi Bar Song”, newer tracks like “Jump Into The New World” and “Rock N Roll Tee Shirt” as well as a cover of Nick Lowe’s classic “Cruel to be Kind”, the band is captured in their true element, entertaining fans in the city that made them who they are today.

ALIVE! In Osaka will be released as a limited edition CD/DVD set, and will also be available digitally in audio and video formats for streaming and download.

With incendiary and icon-building appearances on Lollapalooza, MTV’s 120 Minutes, Beavis & Butthead as well as a well-received tribute to The Carpenters where they covered “Top of the World”, Shonen Knife have secured their rock solid cult status as they march into the future.

SPILL NEWS strives to keep our readers up to date with news and events in the music industry. We keep you informed of the most recent information regarding new releases, tour dates, and information items about your favourite artists.
RELATED ARTICLES
ALIVE! In Osakaidobinews
7.0