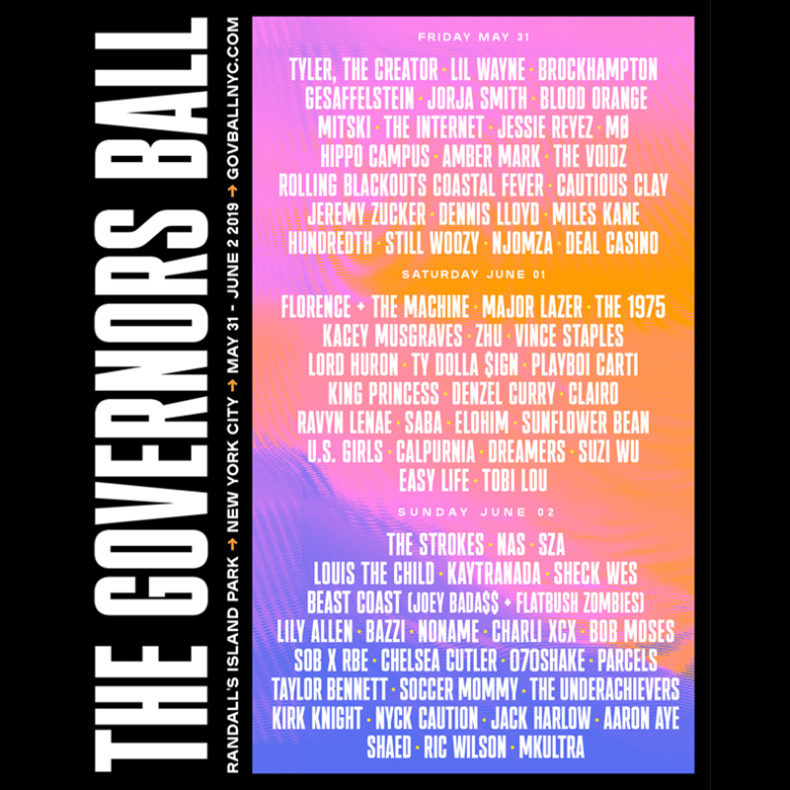 Founders Entertainment is proud to announce the lineup for the 2019 Governors Ball Music Festival. The ninth annual edition of New York City’s very own homegrown fest will take place from Friday, May 31st through Sunday, June 2nd on beautiful Randall’s Island Park. Featuring performances from Florence + The Machine, Tyler, The Creator, The Strokes, Lil Wayne, SZA, NAS, The 1975, Kacey Musgraves, Major Lazer, Brockhampton,  Louis The Child, Mitski, and many more, Governors Ball will showcase 70 artists throughout the weekend. Full festival lineup and poster below.

3-day GA and VIP tickets (including payment plan options) will be available via GovBall.com beginning today at 8:00 AM ET at special “Announce Day” pricing until 11:59:59 PM ET. Regular pricing begins on January 8th at 12:00 AM ET. At the time of purchase, Gov Ball ticket buyers will have the option to add a limited edition, festival branded phone charger to their order, so attendees can ensure their mobile remains juiced from the first note played at the festival until the rideshare home from an epic Gov Ball After Dark show later that night.

This year Governors Ball will celebrate its ninth consecutive running as “New York’s biggest summer bash” (Rolling Stone), and one of the premier live music events on the planet. Last June, over 10 million worldwide viewers tuned in to the live broadcast of the internationally renowned festival, which was praised by performers and press alike. Pharrell proclaimed it “one of the best shows N.E.R.D had ever had in New York City,” and Vic Mensa was enamored by the “really special” and “uniquely strong” energy brought by the crowd. Stereogum noted that the festival has consistently set itself apart from the crowd, writing that “Governors Ball has always strived to have a bit more of a personality than most high-profile festivals, adding in touches you just wouldn’t get anywhere else.”

Founders Entertainment is honored to once again bring those special touches and attention to detail to Governors Ball patrons at the festival grounds on Randall’s Island Park (supported, maintained and programmed by the Randall’s Island Park Alliance www.randallsisland.org). The 2019 festival will feature a signature lineup of the best food NYC has to offer, as well as craft coctails and a brand new beer experience. Between sets, attendees can take in and enjoy surprise pop up performances, play lawn games, explore street art from internationally known artists, and enjoy the relaxing and restorative 21+ Best Kept Secret area. Late night, music fans disperse throughout the city to take in intimate performances from Governors Ball artists as part of the After Dark concert series. All of these elements come together to create the “only in New York” experience “Gov Ball” has become known and loved for.

Patrons looking to take their festival experience to the next level have many options for the weekend. VIP ticket holders can take advantage of a separate fast lane at each festival entrance, and access to all 21+ VIP Viewing Areas, which feature up-close prime viewing, comfy seating, shade tents, flushable bathrooms, specialty food vendors, cell phone charging stations, for hire massage services, and a beer, wine and liquor bar. VIP Plus tickets (only 125 available) go a step beyond the traditional VIP experience, with access to a very exclusive, elevated viewing platform with incredible views of the main stage that comes with comfortable lounge seating, and all-inclusive beer, cocktails, and wines and waiter service. And the Platinum VIP program treats ticket holders as if they were an artist performing at the festival, with a personal festival concierge, exclusive on-stage viewing (restrictions may apply), access to a very exclusive Front of House viewing area at the festival’s four stages, a plush backstage open bar and lounge, and more. Full details on VIP options can be found here.

SPILL NEWS strives to keep our readers up to date with news and events in the music industry. We keep you informed of the most recent information regarding new releases, tour dates, and information items about your favourite artists.
RELATED ARTICLES
florence & the machinegovernors ballmajor lazer