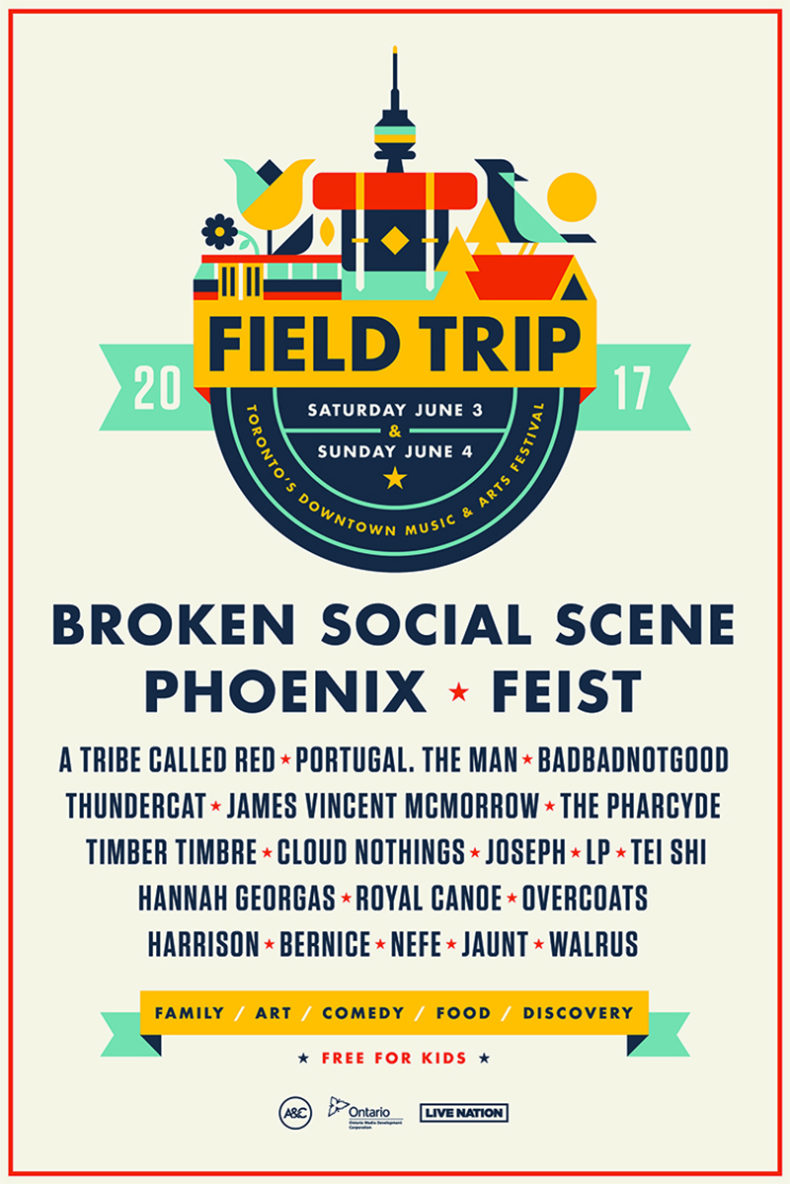 Toronto’s essential downtown music and arts festival is celebrating five years with its biggest lineup yet.  Field Trip has become the unofficial kick off to the city’s busy summer festival season and this year’s bill continues a tradition of curating a world­-class, boutique music event inside the gorgeous and intimate confines of the city’s Historic Fort York & Garrison Common. Driven by a love of community and discovery, Field Trip 2017 welcomes a rich program of not only music, but family-friendly programming, comedy and an exploration of Toronto’s culinary scene starring some of the city’s leading entrepreneurs. All the music, food, drink and activities integrate with collaborative explorations on themes of visual art, technology, fashion and more, like nowhere else.

Saturday’s musical program will be headlined by Arts & Crafts flagship act and Field Trip I headliner Broken Social Scene. BSS will be supported by indigenous electronic trio A Tribe Called Red, whose 2016 release We Are The Halluci Nation has cemented them as one of Canada’s most important acts. Other highlights include Alaska rock band Portugal. The Man. and a rare appearance by California rap legends The Pharcyde, celebrating 25 years of seminal debut Bizarre Ride II The Pharcyde.

On Sunday, French giants Phoenix will co-headline alongside Toronto’s indie royalty Feist, who returns to Field Trip for the first time since 2013. Other Day 2 highlights feature the singular, jazz influenced sounds of BADBADNOTGOOD and Thundercat and a soulful set from Irish songwriter James Vincent McMorrow.

2017 also means another exciting year of Field Trip’s Day Camp programming, where families enjoy a range of immersive activities where music, education and discovery intersect like nowhere else. As with every Field Trip, children under the age of 12 can attend for free.

Field Trip V also includes a full, to-be-announced lineup inside the Laugh Barracks, an indoor comedy showcase stage with performances from some of Toronto’s funniest. And of course, 2017 will feature a new collection of artists in residence, working together to transform Fort York & Garrison Common into an unforgettable visual exploration.

“Toronto is truly one of the world’s great homes to diversity and the intersection of creativity and community is alive in countless forms,” says Field Trip Co-Director Aaron Miller. “The last five years have been a steady reminder of the festival’s opportunity to bring people together. We take great pride in the intimacy and variety of Field Trip and a deep connection with the City of Toronto.”
“Field Trip holds a special place in the hearts of the many contributors who work on the festival every year,” adds Erik Hoffman, Live Nation’s Toronto president. “Celebrating its fifth edition, the festival’s lineup tips its hat to founding artists who graced our stage in Year One while highlighting some of this year’s most exciting new artists from around the planet. A true urban event, Field Trip has grown into one of Toronto’s flagship festivals and we couldn’t be more proud of it.”

* FAMILY, FOOD AND COMEDY PROGRAMMING TO BE ANNOUNCED SOON!

* All tickets are subject to a facility fee and vendor service charges.
* Children 12 years and under are admitted FREE with an adult ticket holder. Maximum of two children per adult.
* GA tickets will also be available at Toronto independent music retailers Soundscapes and Rotate This.
* Payment plans will be available for all ticket types and price points.

SPILL NEWS strives to keep our readers up to date with news and events in the music industry. We keep you informed of the most recent information regarding new releases, tour dates, and information items about your favourite artists.
RELATED ARTICLES
a tribe called redbadbadnotgoodbroken social scene