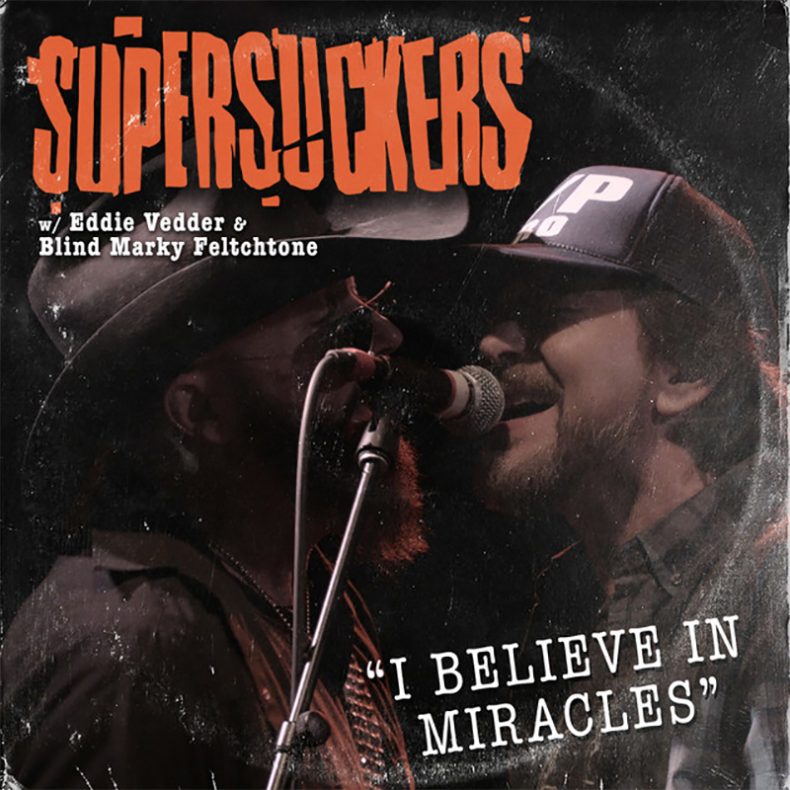 On June 19, 2014, a historic moment happened onstage in Seattle, WA when iconic punk band The Supersuckers played the final, sold out show on their North American tour. For the encore, they covered The Ramones’ “I Believe in Miracles.” Already an important moment since lead singer Eddie Spaghetti was diagnosed with throat cancer and surgery was imminent, but it was became even more significant when Pearl Jam’s Eddie Vedder joined the band onstage with Blind Marky Feltchtone (Zeke) to perform “I Believe In Miracles.” It is released today via iTunes and Spotify.

“Somehow Eddie had found out about my cancer diagnosis and put the word out that he’d like to come to the show and maybe do something with the band,” recalls vocalist / bassist Eddie Spaghetti, “especially with the impending struggle I was about to undertake with the whole cancer fright. The song was extra poignant.”

The performance was shot with multiple cameras, but the multi-track audio files were only discovered recently, buried within the hard drive. The result is a testament to transcendent healing power of live music and the power of its shared community.

“What a humbling experience for me on a personal level and what an amazing rock show for me on a professional level,” continues Spaghetti about the sold out night. “This recording really reflects that. What a document of a historical moment this is! Eddie absolutely KILLED it and the band was on FIRE that night.”

Spaghetti looks back especially at the outpouring of support for the journey he’d have to soon take for his cancer.  “It felt like everyone in the crowd was a friend of mine and there was a lot of love in the room,” he remembers. “From the first note ‘til the last, it just seemed like everyone was on our side.”

One person who especially showed his concern for him was the guest of honor. “After the show, Eddie Vedder talked to me for a long time and pointed me in a direction to get my shit cured,” he says. “He was super helpful with getting me hooked up with a support team of doctors and hospitals that I would probably not have had access to without his assistance. He also wrote a big fat check to help get me through the hard times of not being able to work that was to come. It was all above and beyond the call for him to provide all that help. I will be forever indebted to him. He’s a good one.”

“I Believe In Miracles” is now available via iTunes and Spotify.

SPILL NEWS strives to keep our readers up to date with news and events in the music industry. We keep you informed of the most recent information regarding new releases, tour dates, and information items about your favourite artists.
RELATED ARTICLES
eddie spaghettieddie veddernews