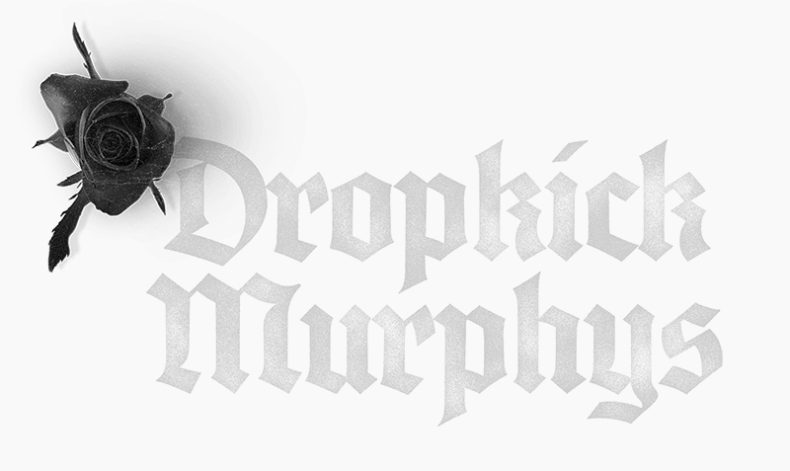 Dropkick Murphys have announced the dates for their headlining St. Patrick’s Day Tour 2018. Marking their first U.S. tour of the year, the run will kick off on February 24 at Mohegan Sun Arena in Uncasville, CT and culminate with the band’s annual hometown run of Boston shows St. Patrick’s Day Week (March 15-18). Tickets for all shows go on sale this Friday, December 8 at www.DropkickMurphys.com,  starting at 10:00 a.m. local time.

Prior to the St. Patrick’s Day Tour, fans are also invited to enjoy a rare opportunity to see Dropkick Murphys and professional boxing in a small intimate setting at the Dropkick Murphys & Murphys Boxing Christmas Celebration on Saturday, December 16 at 6:00 p.m. at Plainridge Park Casino in Plainville, MA. Proceeds from the event benefit the band’s charitable foundation the Claddagh Fund, as well as Ernie Boch’s Music Drives Us Foundation. For more details and to purchase tickets, visit www.DropkickMurphys.com and www.CladdaghFund.org. 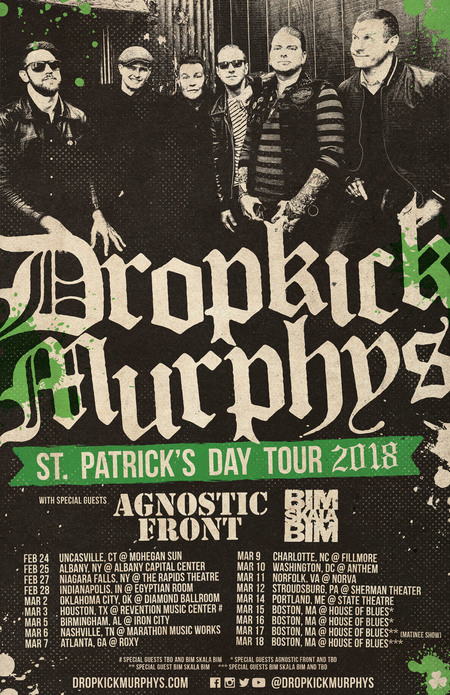 Dropkick Murphys—Al Barr (lead vocals), Tim Brennan (guitars, accordion, mellotron, whistles, vocals), Ken Casey (lead vocals, bass guitar), Jeff DaRosa (banjo, bouzouki, mandolin, harmonica, acoustic guitars, vocals), Matt Kelly (drums, percussion, vocals), James Lynch (guitar, vocals)— are touring in support of their 11 Short Stories Of Pain & Glory album, released through the band’s own Born & Bred Records earlier this year. The album debuted at #8 on the Billboard Top 200 and was the #1 independently released album. There’s a feeling of purpose throughout the album, influenced by the band’s work with The Claddagh Fund, a charity the band established in 2009 to help support addiction recovery as well as children’s and veterans’ organizations. Dropkick Murphys are hands-on in raising funds, mentoring, and lending a helping hand with veterans, youth sports, and drug and alcohol rehabilitation. Many of the songs reflect these experiences, and the band’s sadness, anger and dismay at the opiate epidemic ravaging the country — in particular, Boston and New England — and also their feeling of pride and optimism at the sight of those who have turned their lives around. Dropkick Murphys have become ambassadors for their city. In Boston, it seems like everybody knows someone connected to the band whether by blood, friendship, or the time they shared a brew at a Bruins game. They’ve built a legacy that does Beantown proud.

Initial tour dates for Dropkick Murphys’ St. Patrick’s Day Tour 2018 are as follows, with Agnostic Front and Bim Skala Bim supporting on all dates unless otherwise noted. Additional openers for the Boston shows will be announced soon.

^ with Agnostic Front only
* with Bim Skala Bim only

SPILL NEWS strives to keep our readers up to date with news and events in the music industry. We keep you informed of the most recent information regarding new releases, tour dates, and information items about your favourite artists.
RELATED ARTICLES
dropkick murphysnews

by Daniel Adams on January 27, 2017
THE SPILL MAGAZINE ARTIST PORTRAIT: DROPKICK MURPHYS The Dropkick Murphys are an American Celtic punk band formed in Quincy, Massachusetts in 1996 The band was initially signed to [...]

by Ariel Dawn Lando on September 7, 2014
RIOT FEST 2014 Downsview Park, Toronto September 6-7th, 2014 After a long night of thunderstorms and torrential downpour across the GTA, thousands of eager fans shuffled into Downsview Park for [...]
4.0