Barclaycard presents British Summer Time Hyde Park 2018 is proud to announce The Cure as our next headliner. An exclusive European concert for 2018, the band have chosen BST Hyde Park to celebrate their 40th anniversary at a very special show.

Formed in 1976 at school by a teenage Robert Smith in Crawley, Sussex, The Cure is one of Britain’s most influential and distinctive bands. They have helped shape the post punk musical landscape in the UK, bringing alternative rock to charts around the world. With more than 30 million combined sales of 13 studio albums and more than 40 singles, the band are both commercially and critically acclaimed.

At first called Easy Cure, they switched their name, played their first show and released their first single in 1978 as The Cure. Around 1,500 concerts later, 40 years of essential music making is a cause for great celebration at BST Hyde Park.

A reputation for melancholy, based on albums such as Pornography, Disintegration and Bloodflowers, is belied by a remarkable catalogue of singles. Starting with ‘A Forest’ in 1980, the band has produced an astonishingly varied succession of pop hits, including among many others ‘Boys Don’t Cry’, ‘The Lovecats’, ‘Inbetween Days’ ‘Close To Me’, ‘Just Like Heaven’, ‘Lullaby’, ‘Lovesong’ and ‘Friday I’m In Love’.

The Cure has been credited as a seminal influence on whole musical genres, from post-punk to alternative rock, from gothic rock to emo, and the list of bands they have inspired is wide-ranging and far-reaching. Many of these bands will be joining Robert Smith (voice and guitars), Simon Gallup (bass), Jason Cooper (drums), Roger O’Donnell (Keyboards) and Reeves Gabrels (guitars) for the celebrations on July 7. 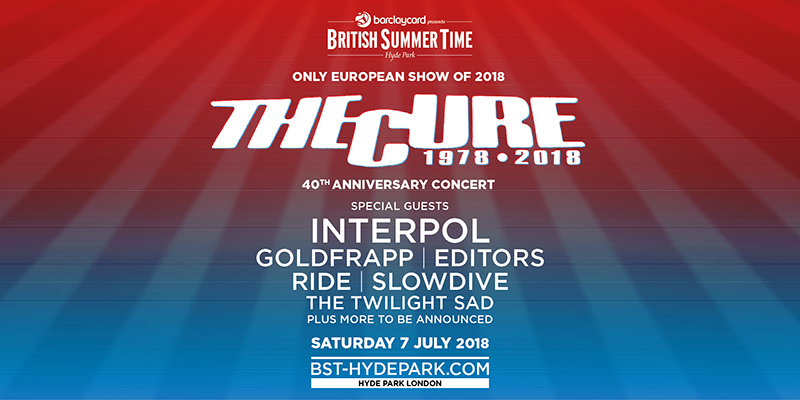 Interpol will be special guests at the show. The New Yorker’s blend of alternative rock and indie comes with a heavy dose of 80’s post-punk tinged darkness. The band have been celebrating this year, playing debut album ‘Turn On the Bright Lights’ in full at gigs to mark its 15th anniversary.  They also revealed new music for their next album due out in 2018.

The Cure will also be joined by fellow Brits Goldfrapp, the electro pop duo who have racked up five top ten albums since the early noughties, including ‘Ooh La La’, ‘Lovely Head’ and ‘A&E’.

With two platinum studio albums and several million combined sales of their five records to date, Editors have enjoyed chart and live success with dark indie guitar rock. The group has performed on some of the biggest stages across the world, from Glastonbury to Rock Werchter.

Ride made musical headlines this year when they released their first new material in 21 years with a brand new album ‘Weather Diaries’ charting in the UK Top 20. Via their sound and success, Ride paved the way for Britpop and were the first breakthrough for Alan McGee’s Creation Records, which subsequently spawned Primal Scream and Oasis.

Slowdive are honoured to join the bill, having previously cited The Cure as one of their influences when they formed in the late 1980s.  Slowdive reunited in 2014 and received a huge welcome for their return shows, resulting in a new album this year. Slowdive is their first in 22 years and a reminder of their own influence over a generation of artists.

Scottish trio The Twilight Sad was support band for all 76 dates on The Cure’s World Tour 2016. Robert Smith has long been a fan and supporter of the band, covering their song ‘There’s A Girl In The Corner’ for a 7-inch charity single release.

With five huge headliners announced for the 2018 event so far, music lovers can expect another phenomenal year from the award-winning festival, all in the heart of London.

On Friday 6th July, music icon Roger Waters will be bringing his Us + Them Tour to the UK for the first time ever. The Pink Floyd visionary is noted for taking his sonic and visual experimentation to breath-taking levels and turning rock n roll into theatre on the grandest scale. Waters will be showcasing highlights from his groundbreaking body of work, with songs from Pink Floyd’s greatest albums (Wish You Were Here, The Wall, Animals, Dark Side of The Moon), along with tracks from his critically acclaimed new album “Is This the Life We Really Want?”.

With a decades-long career and countless accolades to his name, Eric Clapton is also something of a local, having first played Hyde Park with Blind Faith on June 7th, 1969 alongside band mates Ginger Baker, Steve Winwood and Rick Grech to a 120,000 strong audience – it was the band’s debut.

He returned to the Royal Park in 1996, recording a classic live concert that raised money for The Prince’s Trust, again in 2008 and has played over 200 times at the nearby Royal Albert Hall.  Amazing support comes from Santana, Steve Winwood and Gary Clark Jr. with more to be announced.

On Friday 13th July, Michael Bublé returns for his only show of 2018 and his biggest UK concert. The undisputed ‘King of Cool’ will be dazzling Hyde Park with his classic voice, endearing charm and sheer panache that has seen him compared with the great singers and entertainers. He has carved a unique place in the hearts of fans around the world and lit up pop charts since his debut album in 2005, bringing jazz standards to a new generation while scoring his own original hits including the unforgettable global smashes ‘Home’, ‘Haven’t Met You Yet’, ‘Everything’ and ‘Lost’.

On Saturday 14th July, Hawaiian troubadour Bruno Mars will be performing fresh off the back of his ‘24K Magic World Tour’, which spans over 172 shows across five continents in support of his 2x platinum-selling album 24K Magic. The UK leg of the tour included four critically acclaimed shows at London’s O2 Arena. Now, Mars is set to return to the UK, taking to the stage at in Hyde Park with a dazzling visual production and a set-list crammed full of his chart-topping hits.

Embarking on its 6th edition, Barclaycard presents British Summer Time Hyde Park is now one of Britain’s biggest and best summer events, attracting some of the greatest names in music to the heart of London’s beautiful Hyde Park.

James King, Senior Vice President, AEG Presents comments: “The Cure playing at Barclaycard presents British Summer Time Hyde Park will be an incredible day where The Cure join the list of other global legends who have played the Great Oak Stage. On July 7th we celebrate the 40th anniversary of a truly iconic British band and it’s an honour that they have chosen to share this magical experience with us in Hyde Park.”

Roscoe Bowman, Senior Experiential Marketing & Partnerships Manager for Barclaycard, said: “We’re excited to welcome The Cure, one of the most influential bands of the 20th century. Over the past 40 years their music has helped to define countless musical genres from post punk to new wave, and we look forward to hearing their unique sound in what will surely be a great night in Hyde Park. General ticket sales will begin on 15th December but Barclaycard customers can get a head start with exclusive pre-sale ticket access from 9am on Tuesday 12th December.”

Alun Mainwaring, Head of Events, Filming and Commercial Development at The Royal Parks said: “The Cure choosing to play their exclusive 40th anniversary show here in Hyde Park tops off an outstanding first weekend for BST 2018. Flanked by Roger Waters and Eric Clapton, The Cure will play the Saturday night, making their Hyde Park return, having last played here in 2002. Since it began, BST Hyde Park has been attracting the biggest artists on the planet and delighting sell-out crowds – which in turn has helped us to maintain this precious park.”

*general on sale prices may differ

SPILL NEWS strives to keep our readers up to date with news and events in the music industry. We keep you informed of the most recent information regarding new releases, tour dates, and information items about your favourite artists.
RELATED ARTICLES
editorsgoldfrappinterpol
10