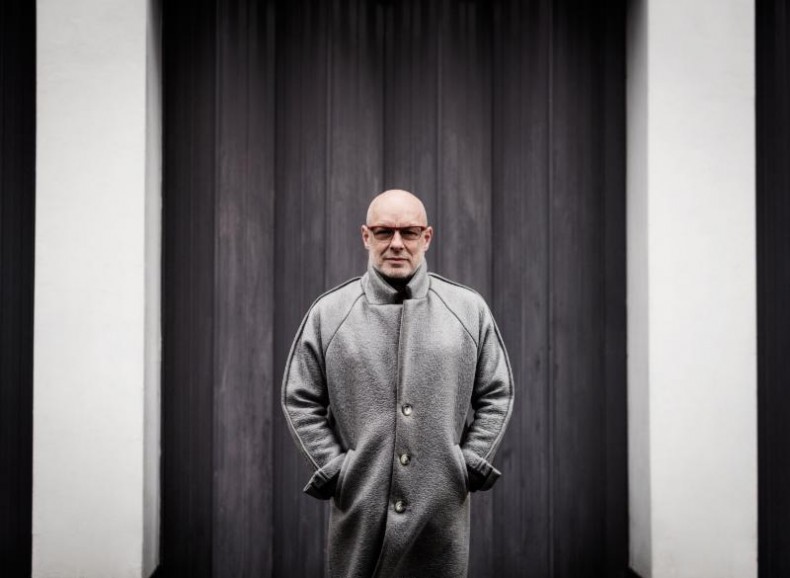 “Humankind seems to teeter between hubris and paranoia: the hubris of our ever-growing power contrasts with the paranoia that we’re permanently and increasingly under threat. At the zenith we realise we have to come down again…we know that we have more than we deserve or can defend, so we become nervous. Somebody, something is going to take it all from us: that is the dread of the wealthy. Paranoia leads to defensiveness, and we all end up in the trenches facing each other across the mud.” – Brian Eno

The Ship, the new album by Brian Eno, will be released on Friday, April 29th, 2016 via Warp Records/Fontana North. The Ship is Eno’s first solo record since 2012’s Grammy-nominated LUX. Originally conceived from experiments with three dimensional recording techniques and formed in two, interconnected parts, The Ship is almost as much musical novel as traditional album. Eno brings together beautiful songs, minimalist ambience, physical electronics, omniscient narratives and technical innovation into a single, cinematic suite. The result is the very best of Eno, a record without parallel in his catalogue.

“On a musical level, I wanted to make a record of songs that didn’t rely on the normal underpinnings of rhythmic structure and chord progressions but which allowed voices to exist in their own space and time, like events in a landscape. I wanted to place sonic events in a free, open space.

One of the starting points was my fascination with the First World War, that extraordinary trans-cultural madness that arose out of a clash of hubris between empires. It followed immediately after the sinking of the Titanic, which to me is its analogue. The Titanic was the Unsinkable Ship, the apex of human technical power, set to be Man’s greatest triumph over nature. The First World War was the war of materiel, ‘over by Christmas’, set to be the triumph of Will and Steel over humanity. The catastrophic failure of each set the stage for a century of dramatic experiments with the relationships between humans and the worlds they make for themselves.

I was thinking of those vast dun Belgian fields where the First World War was agonisingly ground out; and the vast deep ocean where the Titanic sank; and how little difference all that human hope and disappointment made to it. They persist and we pass in a cloud of chatter.”

The album opens with the 21-minute eponymously titled “The Ship” on which Eno’s cyclically sung sea-chant builds in ominous drama, snatches of distant voice and creeping electronics. Listen in a dark room and physically feel the power of this endless sea. “Wave. After. Wave.”

“Fickle Sun” follows in three movements. The first continues where “The Ship” left but with Eno’s voice sounding more upfront, determined, even despairing: “and so the dismal work is done” / “the empty eyes, the end begun” / “there’s no-one rowing any more, abandoned far from any shore” and the refrain “when I was a young soldier..”.

“The poem read by Peter Serafinowicz was created by a Markov Chain Generator (software written by Peter Chilvers) into which we fed accounts of the sinking of the Titanic, some First World War soldiers songs, various bits of cyber-bureaucracy and warnings about hacking, some songs of mine, some descriptions of machinery, and so on. The Generator produced thousands of lines of text from which I extracted a few and then put them into this order.”

The album’s finale is a Lou Reed penned cover of The Velvet Underground’s “I’m Set Free”, a band who were famously credited by Eno as the inspiration behind his early music explorations as an art student.

“Written in the late sixties, Lou Reed’s song “I’M SET FREE” seems even more relevant now than it did then. Perhaps anybody who’s read Yuval Noah Harari’s SAPIENS will recognise the quiet irony of ‘I’m set free to find a new illusion’…and its implication that when we step out of our story we don’t step into ‘the truth’ – whatever that might be – but into another story.”

Coinciding with The Ship‘s release, a series of Eno installations will be happening around the World at which you will be able to hear an alternative telling of The Ship in multi-channel 3-dimensional sound installations.

The impact of The Ship album will surely be felt long after these installations are ended; it signals yet another cycle in Eno’s creative career – “This album is a succession of interleaved stories. Some of them I know, some of them I’m discovering now in the making of them.”

SPILL NEWS strives to keep our readers up to date with news and events in the music industry. We keep you informed of the most recent information regarding new releases, tour dates, and information items about your favourite artists.
RELATED ARTICLES
brian enofontana northnews
10