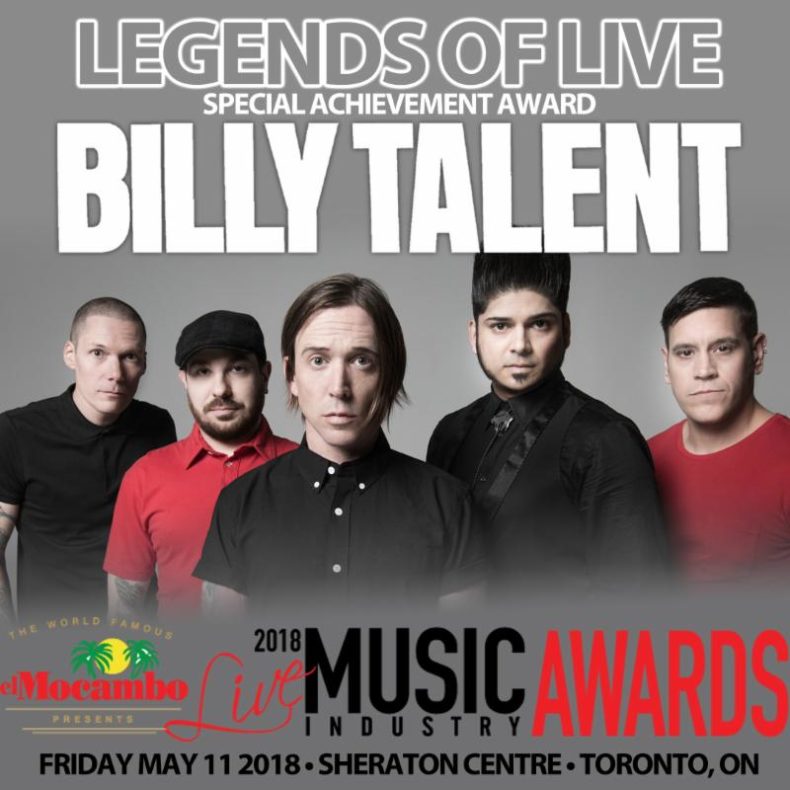 Canadian Music Week (CMW) and Music Canada Live are excited to announce Billy Talent – Ben Kowalewicz, Ian D’Sa, Jonathan Gallant, Aaron Solowoniuk and Jordan Hastings – as the 2018 recipients of the Legends of Live Special Achievement Award. The multi-platinum, generation-defining rock band will be honoured for their achievements and longstanding career in music and live touring. Billy Talent will join the celebrated list of previous Legends of Live recipients which include: Blue Rodeo and The Tragically Hip. In celebration of their 25th anniversary and receiving the Legends of Live Award, Billy Talent will deliver a special two song performance at the 3rd Annual Live Music Industry Awards at the Sheraton Centre Toronto Hotel in the Dominion Ballroom (123 Queen St W, Toronto ON) on Friday, May 11th for Happy Hour from 4:30PM – 6:30PM. Purchase tickets here.

“As we celebrate our 25th anniversary as a band this year, we are incredibly honored to be the recipients of the 2018 Legends of the Live Special Achievement Award. We’ve always prided ourselves on our live shows and to be acknowledged for it is something we don’t take lightly.  We’d like to express our thanks and gratitude to Ralph James and Lorraine Webb at APA who have been with us since the beginning as well as to CMW for this heartfelt honor and for their  continued support over the years.  Their efforts in encouraging, embracing and enabling this wonderful, special and diverse community is what allows the Canadian music scene to grow and to thrive.” – Billy Talent

Since the release of their self-titled debut in 2003, Billy Talent have sold nearly one million albums in Canada alone, and nearly three million albums internationally. Their albums Billy Talent I and II and III have all received multi-platinum certifications, with platinum status for Dead Silence and gold status for their latest studio album Afraid of Heights which also debuted at #1 in Canada as well as in Germany, Switzerland and Austria. This is the fourth consecutive #1 debut for the Toronto based group, and it has gained nearly forty million streams internationally.

Their sales have been supported by relentless touring across Canada and Internationally including sold out shows in Europe such as London, Paris, Frankfurt, Barcelona, Luxemburg, Hamburg, Berlin, Manchester, Zurich, Amsterdam, Madrid, Vienna, Bristol, Antwerp, Linz, Glasgow, Graz, Leipzig, Nottingham, Munich, Stuttgart, Lingen, Cardiff, Hannover, Lausanne and Dusseldorf. In 2016, Billy Talent was honoured with the opportunity to open to a sold out crowd for the legendary Guns & Roses at Rogers Stadium in their hometown, Toronto.

“It’s been my privilege to be on the Billy Talent team for the last 16 years – a band that delivers the goods every single show – they don’t walk on the stage, they HIT the stage!” – Ralph James, APA

Billy Talent have enjoyed tremendous success at Canadian rock radio where they have had three #1 hits that combined for 20 weeks at the top spot, six Top 5 hits, and six Top 10 hits. They have won 7 Juno Awards and have been nominated 23 times, including three nods for Afraid of Heights (Group of the Year, Rock Album of the Year, and Ian D’Sa for Producer of the Year). They have also been nominated for 32 MMVA Awards – taking home the prize 10 times.

“Billy Talent’s ongoing success is something that we can all admire as they are known for their endless tours and multi-platinum selling records. We extend our sincerest congratulations to the band on everything they’ve achieved over the past 25 years, and look forward to acknowledging them at the 3rd Annual Live Music Industry Awards.” – Neill Dixon, President, Canadian Music Week

For more information on the 3rd Annual Live Music Industry Awards, go to http://livemusicawards.net/. The award show will take place on May 11th at the Sheraton Centre Hotel in the Dominion Ballroom in Toronto, Ontario.

SPILL NEWS strives to keep our readers up to date with news and events in the music industry. We keep you informed of the most recent information regarding new releases, tour dates, and information items about your favourite artists.
RELATED ARTICLES
billy talentcanadian music weeknews