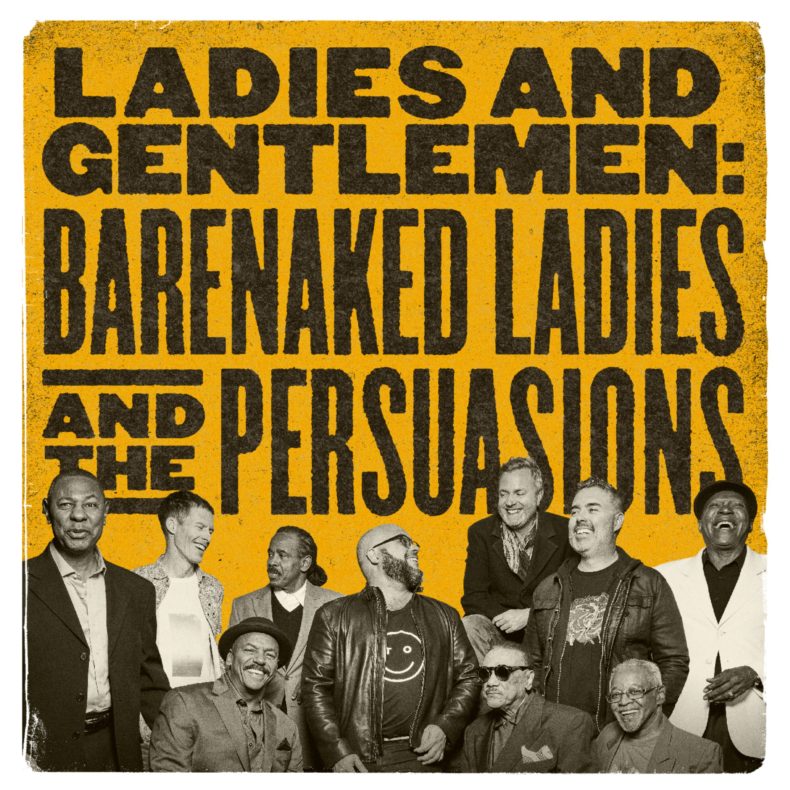 Barenaked Ladies have announced a very special collaboration with the legendary “Kings of A Cappella” titled, Ladies And Gentlemen: Barenaked Ladies And The Persuasions to be released April 14, 2017. Produced by Gavin Brown, the album features 14 tracks re-imagined BNL’s award-winning catalogue and the classic ‘Good Times’. BNL recorded the album live off the floor with The Persuasions last Fall at Noble Street Studios in Toronto.

Ladies And Gentlemen: Barenaked Ladies And The Persuasions is available to pre-order on iTunes on March 10. Album and bundles featuring exclusive merchandise of Barenaked Ladies and The Persuasions will also be available worldwide through PledgeMusic HERE. Each pre-order includes four instant-grat downloads of “The Old Apartment”, “Odds Are”, “Keepin’ It Real”, and “Don’t Shuffle Me Back”.

The video streaming app Sessions X filmed the entire session and will feature full-length performances, interviews, and behind the scenes moments. Sessions X will launch their BNL content on Wednesday, March 22.

The seed for Ladies and Gentlemen: Barenaked Ladies & The Persuasions was planted when Kevin Hearn befriended The Persuasions at Lou Reed’s memorial held at the legendary Apollo Theatre in 2013. The friendship led to an invitation for The Persuasions to perform with BNL at Central Park Summerstage during the Barenaked Ladies 2016 Last Summer On Earth tour. Both bands had such a fun time, they all agreed to “do more” together. Before hitting the studio together, and after running through about 25 songs from the BNL catalogue, both BNL and the Persuasions’s excitement grew and the songs were narrowed down to the final 15 tracks featured on the LP.

Although The Persuasions enjoy a long, storied career, the group has admittedly never recorded an album in a room live, with the band performing the songs. Says Revels, “…with Barenaked Ladies, [their] music is passionate so I guess that’s why we identify with it…because we can feel passion so I think that’s why it was a natural union.”

Says BNL drummer Tyler Stewart, “To actually play with these guys who are veterans of music making for so long… everything that comes out of their mouths is dripping with soul and you can’t help but absorb some of that when you’re in the room.”

Considering the once-in-a-lifetime feel of a musical project between two groups who have collectively released 40 albums across their careers, Sessions X, which is an online subscription music series that features intimate performances straight from the stage or studio, was an opportunity to document the recording session, all of which was recorded over two days in October, 2016 in Toronto. Tyler Stewart described the collaboration as “Top three most fun things I’ve done” in his twenty six years of performing. Dave Revels, lead singer for The Persuasions described the collaboration as a “beautiful chemical reaction”.

Founded in 1962, The Persuasions first came together on the street corners of Brooklyn with a musical inventory deep rooted in gospel, with a major measure of soul, and a dose of pop. Featuring original members Jimmy Hayes and Jayotis Washington, along with Raymond Sanders and Dave Revels, their eclectic repertoire has drawn from country to blues to gospel to rock to jazz. The group has released 26 albums, performed in concert halls worldwide, and shared stages with such seminal artists as Lou Reed, Ray Charles, Bruce Springsteen, Richard Pryor and Frank Zappa.

Currently, Barenaked Ladies are putting the finishing touches on their 15th studio album, Fake Nudes, expected to be released later this Fall. More information will be announced in the coming weeks.

Ladies And Gentlemen: Barenaked Ladies And The Persuasions Track Listing

SPILL NEWS strives to keep our readers up to date with news and events in the music industry. We keep you informed of the most recent information regarding new releases, tour dates, and information items about your favourite artists.
RELATED ARTICLES
barenaked ladiesnews