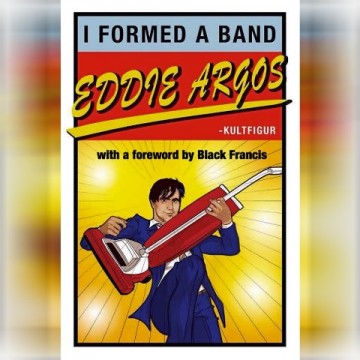 Eddie Argos the lead singer of Art Brut, recently completed a very successful Indiegogo campaign to publish a memoir. All those limited special 500 copies have now gone and he is publishing a second edition.

The story begins with Eddie playing the vacuum cleaner on stage in his home town of Poole, and ends up with Art Brut recording Art Brut VS Satan with Black Francis in Salem.

In between you will discover the answers to these questions:

Just how hard did he kick Paul McCartney when he met him?

What colour did Russell Senior from Pulp try and make Eddie sing in?

Which of Art Brut’s songs is Liam Gallagher’s favourite, and did Oasis really sing a Half Man Half Biscuit song at Eddie? Or was it a psychotic episode?

What is it like to get into a fight with The Magic Numbers, Kele from Bloc Party and various members of The Bravery? (luckily not all at the same time).

What question did Conan O’Brien ask Jasper Future that he didn’t know the answer to?

Why does Al Jourgensen from Ministry think Eddie is a famous singer called Franz Ferdinand with a hit single about his penis?

What valuable lesson did Eddie learn from Anton Newcombe at the Red Rocks Amphitheatre Colorado?’

The book contains illustrations by the artist Katie Pope, from the band the Just Joans. And has a Foreword by Black Francis from Pixies.

Pre-order I Formed A Band now.

Eddie Argos has also written a graphic novel, due to be published by Image Comics (The Walking Dead, Phonogram, The Wicked + The Divine, Sex Criminals) on November 11th 2015.

‘I thought rhyming things was my favourite pastime, turns out I love writing comics just as much! I’m as excited about Double D coming out on Image as I was about Formed a Band coming out on Rough Trade. There are so many great comics on Image that every time I remember a new one I start jumping around the room because now we are label mates’

Featuring art by longtime collaborator Steven Horry, Double D tells the story of how, after the official Worst Day Ever, overweight bully magnet Danny Carter discovers he can use his excess body mass to fuel superpowers. Obviously he’s going to be a superhero and fight crime, but when you’re fifteen years old and you live in the suburbs it’s not quite as easy as expected…

To coincide with the release of the graphic novel, Eddie and Steven – alongside musicians Mark Heffernan and Grant Purser – have recorded a soundtrack album, which will be released by Post/Pop Records in late November/early December.

Double D is available to pre-order via your local comic shop or online now. Launch events have been confirmed in London & Berlin, which will include a signing, Q&A and live performance of songs from the soundtrack.

Review copies of Double D Book One are available upon request.

The full creative team will also be in attendance at the Thought Bubble convention in Leeds on 14th-15th November.

SPILL NEWS strives to keep our readers up to date with news and events in the music industry. We keep you informed of the most recent information regarding new releases, tour dates, and information items about your favourite artists.
RELATED ARTICLES
black francisnews