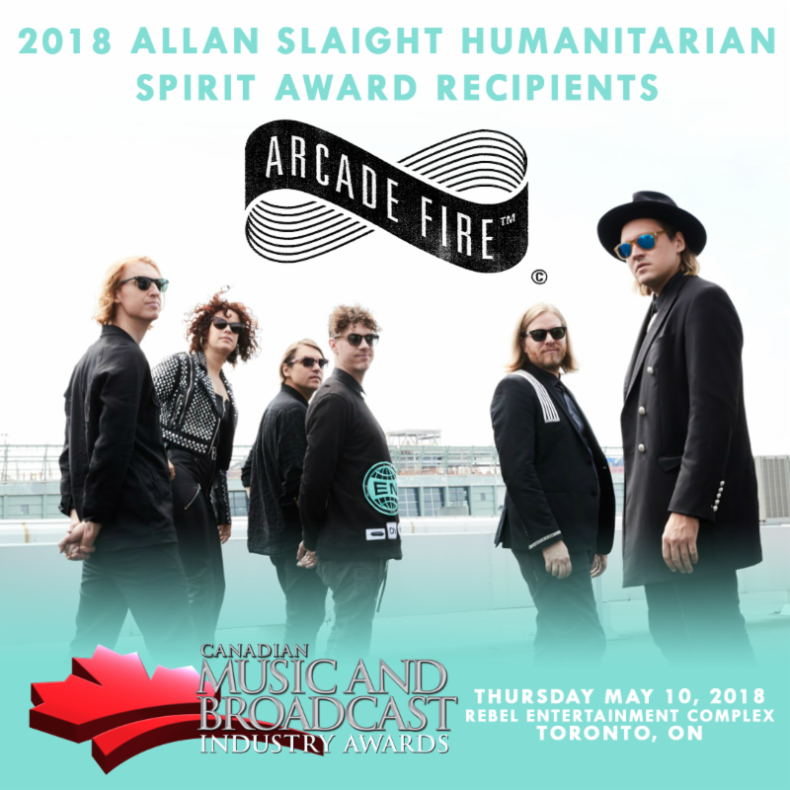 “We’re deeply honoured to receive the Allan Slaight Humanitarian Spirit award. For more than a decade our fans have joined us in supporting the organizations Partners in Health and KANPE and the work they do in Haiti. These relationships have profoundly influenced our lives and our art. This award and the example of the Slaight family, are both a great support and a motivation to keep doing more.” – Arcade Fire

Hailing from Montreal, Quebec, Arcade Fire are a six piece band that have won two BRITs, the 2010 Album of the Year GRAMMY, and have released five critically acclaimed and commercially successful albums. Renowned for their powerful, enthusiastic live performances, Arcade Fire carries the same passion to their humanitarian efforts.

To date, Arcade Fire has raised and donated more than $4 million, and has also trained thousands of outreach volunteers and engaged over 500,000 fans for a cause that they hold very close to their hearts – the people of Haiti. In 2004, a song titled ‘Haiti’ appeared on the first Arcade Fire album Funeral. That same year, Arcade Fire played two hometown shows and gave all the profits to Albert Schweitzer’s hospital in Haiti.

“The Slaight family is proud to acknowledge the great deeds that Arcade Fire has done for causes at home and abroad over the years. My father, Allan Slaight, has always stressed the importance of giving back and this great Canadian band has done so in spades.  In awarding them with the Allan Slaight Humanitarian Award, we celebrate the great work they have done in supporting the Haitian people and the acts of kindness they have provided to many.” – Gary Slaight, President and CEO, Slaight Communications Inc.

In 2006, the band started donating $1 per concert ticket sold to Partners in Health (PIH) – a non-profit organization founded in Haiti that brings high quality healthcare to the poorest areas of the world. Established in 1987, PIH works to address poverty, inequality, and other root causes of illness, bringing the benefits of modern medical science to those most in need of them. In the 25 years since its start in Haiti’s mountainous Central Plateau region, PIH has expanded and built long-term relationships with sister organizations based in settings of poverty, launching additional projects around the world to provide a preferential option for healthcare and serve as an antidote to despair.

KANPE and Artists for Peace and Justice are two other incredible organizations that Arcade Fire has developed long-term partnerships with. Co-founded by the band’s Régine Chassagne in 2010, KANPE (meaning “To Stand Up” in Haitian creole) is a foundation that stands with the most vulnerable Haitian families to work towards their financial independence. KANPE implements a family support program that integrates the pillars of autonomy: health, nutrition, housing, education, agriculture and leadership. With an initial duration of 18 months, the successful program provides the foundation that enables families to achieve financial autonomy in a sustainable way. The Artists Institute in Haiti is the first of its kind in the country, offering free college for art and technology, founded by Artists for Peace and Justice.

Arcade Fire has traveled to Haiti several times to learn more and engage deeply in the social and cultural context of the nation. On one visit, Win Butler noticed the Haitian climate’s potential for coffee farming – and an infusion of much-needed jobs to the hemisphere’s poorest nation. He approached La Colombe Coffee to co-create RaRa Coffee, a limited edition Haitian grown blend, with proceeds going straight to Partners in Health and the Haiti Coffee Academy.

In 2014 the growing partnership between Arcade Fire and PIH resulted in the creation of PLUS1, an international organization founded by some members of the band.

Though the premise is simple – leveraging the convening power of concerts to reach music fans and engage them in global issues by adding $1 to every ticket and donating 100% of those dollars to high impact charitable organizations – the impact has been immense. PLUS1 has raised $6Million for global health, education, human rights, and the environment, while working with a growing community of artists including The National, Sam Smith, Chvrches, Flume, Lights, Metric, and nearly 100 more.

Arcade Fire emerged from Montreal onto the world stage with debut album Funeralin 2004, championed soon after its release by fans, critics, and the likes of David Bowie and U2 who would share stages with the band over the course of its first world tour. Sophomore album Neon Bible followed in 2007, as did 2010 breakthrough The Suburbs, which debuted at #1 in seven countries as the band’s growing following elevated it to arena headlining status, while the album won Album of The Year at the Grammy Awards. Fourth album Reflektor was released in 2013, hitting #1 in the Official Album Charts of the UK, Canada, Ireland, Belgium, Portugal and the USA. 2014 saw the Reflektor Tour conclude as the record won Album of the Year and Alternative Album of the Year at the Juno Awards, and The Reflektor Tapes, a documentary about the making of the album directed by Kahlil Joseph, was selected to be shown at the 2015 Toronto Film Festival. Preceded by an elaborate fake news campaign, Arcade Fire’s fifth album Everything Now was released in July 2017. Everything Now’s international #1 debut coincided with launch of the Infinite Content Tour, the band’s most ambitious live production to date, which is currently underway with arena and festival headline dates continuing well into 2018.

“It is an honour to recognize Arcade Fire’s charitable essence with the Allan Slaight Humanitarian Spirit Award. We admire their passion and determination in philanthropic and humanitarian causes. Their devotion to numerous charities and organizations is very inspiring. They have shown extraordinary support in social initiatives and charitable initiatives, and we are thrilled to celebrate them and their amazing music at the 2018 Canadian Music & Broadcast Industry Awards.” – Neill Dixon, President & CEO, Canadian Music Week

For more information on the 2018 Canadian Music & Broadcast Industry Awards, go to www.cmw.net. The award show will take place on May 10th at Rebel Entertainment Complex in Toronto, Ontario.

SPILL NEWS strives to keep our readers up to date with news and events in the music industry. We keep you informed of the most recent information regarding new releases, tour dates, and information items about your favourite artists.
RELATED ARTICLES
arcade firecanadian music weekcmw
4.0