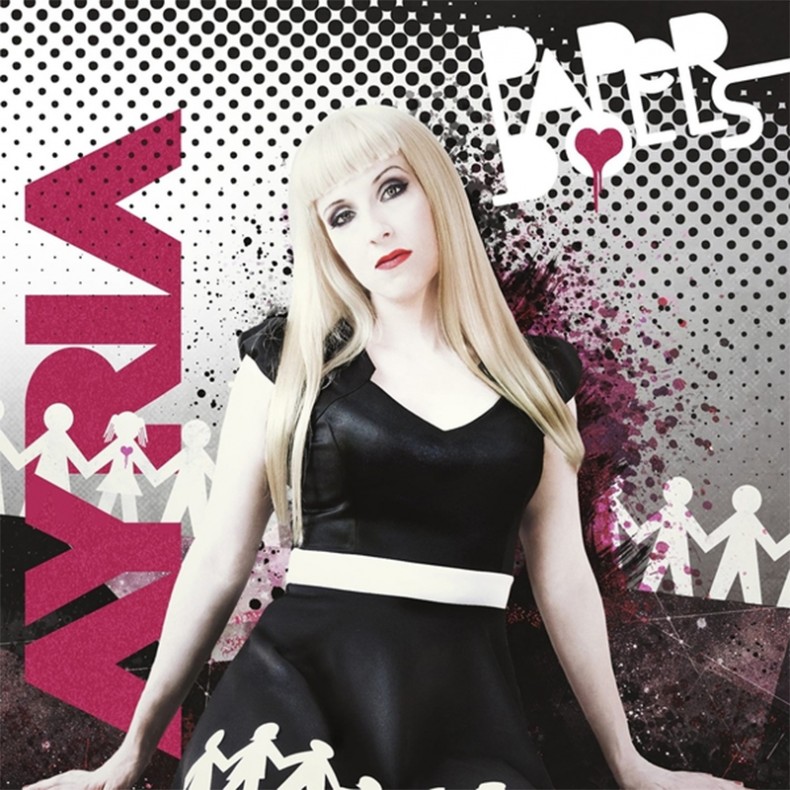 AYRIA’S ‘PAPER DOLLS’ TO BE AVAILABLE IN 4 AUDIO FORMATS

Almost three years after 2013’s Plastic Makes Perfect, AYRIA strikes hard again with release number five. AYRIA is now a 12 year scene veteran and Jennifer Parkin has proven her sonic style and exploration into the darker side of alt-pop is here to stay. AYRIA, an established icon of female club industrial music, mashing pounding beats, aggressive synths, with melodic female vocals, stays true to her roots on this release diving back into the slick electro sound that started AYRIA in 2003, while continuing to evolve the sound to appeal to modern listeners. Canadian singer & songwriter Jennifer Parkin, teamed up once again with heavyweight producer Sebastian R. Komor. Their artistic chemistry to produce the kind of unique alternative electro-pop that sounds both big, gritty and beautiful all at once, continues to capture new breeds of fans around the globe.

2016’s Paper Dolls is not a minimal release. This release is no longer an exploration. This release is 11 solid anthematic tracks that can each stand on their own as a single. Long gone is the young girl from 2003 starting a solo project and exploring her sound. What’s left in 2016 on “Paper Dolls” is a confident artist, a mature sound, and some of Jennifer’s strongest songwriting to date, all combined with explosive, ear-candy production highlighting vocals in the midst of AYRIA’s huge beats and synths.

Laying it all out there for listeners with lyrical themes of suicide, technology & social media, feminism, abuse, opulence, emptiness, numbness and isolation, with a hint at happiness just so you know that not all hope is lost.

For club songs suited for the dance floor, “Underneath The Water”, “Crash And Burn”, “Feed Her To The Wolves”, “Chameleon”, “Not Receiving”. For sexy, moody, mid-tempo electro-EBM-alt-pop, “You’re So Vacant”, “Deconstruct Me”, “Paper Dolls”. And finally, some confident and beautiful slower tempo tracks, lacking on recent releases and reminiscent of the “Flicker” era of AYRIA, “Sticks and Stones”, “Barren”, “Fading From Me”.

This release will continue to appeal to fans, as AYRIA’s established and unique genre of female industrial-alt-pop has brought listeners along for over a decade into this world of distortion, bass, melody and melancholy. Jennifer invites you in again, to hear for yourself where she’s been, and where she has now arrived at and conquered.

Paper Dolls does not only come as a regular CD, but also as a special 2CD limited edition box set with disc 2 titled “The Heartless Kingdom” which takes you on a moody ride featuring two more original tracks, some transformed ballad reworks of club tracks, remixes by personal friends Decoded Feedback, Bhambhamhara, as well as some goodies: postcards, stickers, posters.

AYRIA’s hardcore fans: be sure to grab your copy fast since the first 1000 copies of the ltd edition will come out with an exclusive spotted varnish glitter effect on the deluxe box cover artwork. 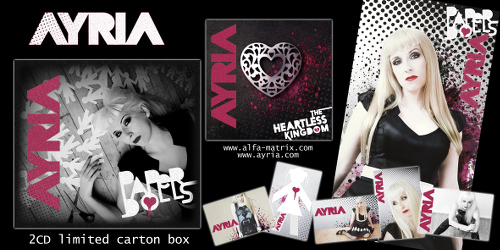 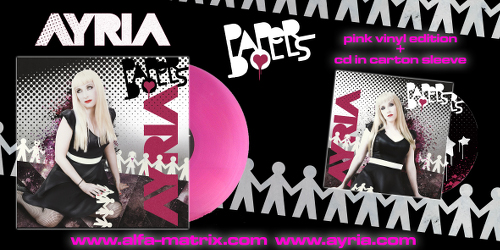 SPILL NEWS strives to keep our readers up to date with news and events in the music industry. We keep you informed of the most recent information regarding new releases, tour dates, and information items about your favourite artists.
RELATED ARTICLES
alfa matrixayrianews