News
108
previous article
SPILL MUSIC PREMIERE: IT'S FOR US - "ALL THE TIME"
next article
SPILL NEW MUSIC: ST. JIMI SEBASTIAN CRICKET CLUB - "I STILL GET THE CALLS" 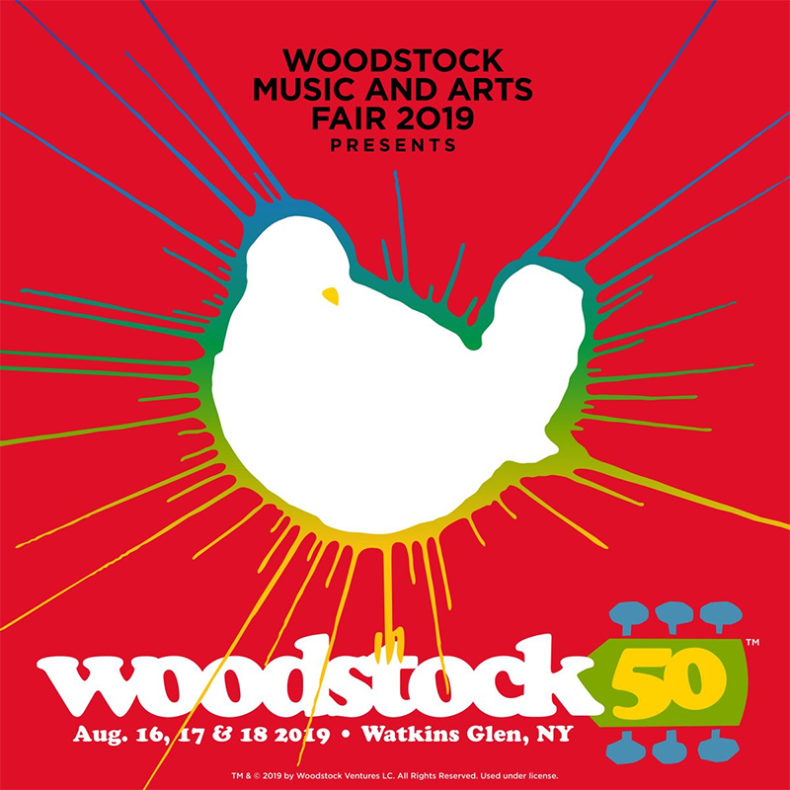 BRINGING PEACE, LOVE & MUSIC BACK TO THE PLANET

Woodstock 1969’s Co-Producer and Co-Founder Michael Lang announced today the return of the legendary Woodstock Music & Arts Fair for its official 50th anniversary celebration. Woodstock 1969 was billed as “3 Days of Peace & Music,” and 50 years later, Woodstock 50 will give generations of fans the opportunity to join together in the festival’s foundational intent of harmony and compassion.

The three-day event will take place from Friday, Aug. 16 through Sunday, Aug. 18 in Watkins Glen – located in Upstate New York. Lang has put together a world-class team for curation and onsite festival production. Woodstock 50 will be the only authorized commemoration of the iconic 1969 festival and will feature an amazing lineup.

To commemorate the movement that defined a generation of youth, a limited number of discounted pre-sale tickets will be available to college students ages 18-25, by the end of January. The lineup and general on-sale information will be announced over the coming weeks.

“It’s time to put the speculation to rest and officially announce that Woodstock 50 is happening,” said Lang. “The original festival in ‘69 was a reaction by the youth of the time to the causes we felt compelled to fight for – civil rights, women’s rights, and the antiwar movement, and it gave way to our mission to share peace, love and music. Today, we’re experiencing similar disconnects in our country, and one thing we’ve learned is that music has the power to bring people together. So, it’s time to bring the Woodstock spirit back, get involved and make our voices heard.”

The 1,000 acres of greenfield at Watkins Glen International and the surrounding area will make for ample space for attendees to enjoy in revelry and community, and expansive stages primed for one-of-a-kind performances. The festival grounds will also feature lodging experiences for tents, RVs, vans, and more premium camping options.

“The original site in Bethel is wonderful, but much too small for what we’re envisioning,” said Lang. “Watkins Glen International gives us the ability to create something unlike any other commemorative event and something uniquely Woodstock,” he added. Watkins Glen International also has a place in music festival history as the home to Summer Jam in 1973. “It’s a beautiful location and an ideal site,” said Lang, noting that when he first saw it, he felt “an immediate emotional connection to the land.”

The festival will have three main stages, bringing together more than 60 of the biggest names and emerging talent in rock, hip hop, pop and country. Music fans can expect current artists and unique collaborations, but also tribute performances breathing new life into some of Woodstock’s iconic moments. “It will be primarily contemporary talent, but the legacy acts will be represented and honored,” said Lang.

And in true Woodstock form, a key element of the 50th anniversary festival will be matching music with purpose – specifically sustainability and advocacy. Nonprofit and cause-driven organizations will be a big part of the experience, with programming and activations onsite, including screenings, panels and art installations. Highly curated ‘neighborhoods’ will feature more intimate and unique experiences – with art forms from music to comedy, spoken word to film and amazing food offerings.

“The Woodstock 50th Anniversary will be about sharing an experience with great artists and encouraging people to get educated and involved in the social issues impacting everyone on the planet,” said Lang. “It’s so inspiring to see young people today channeling their passion into causes they care about. That’s something that’s always been a part of Woodstock’s mission, and it’s a big focus at the 50th festival.”

Lang will be working hand-in-hand with Schuyler County and local and state agencies to bring Woodstock 50 to life. “I want to offer heartfelt thanks in advance to the State Police, Sheriff’s Department and the entire Schuyler County Administration, State Department of Health, and of course the governor of this great state, which has embraced the Woodstock legacy,” said Lang.

He added that “we feel we have the right team in place and look forward to working with all of the agencies to create a successful and historic event for the state of New York and Schuyler County.”

The Woodstock 50th anniversary logo was created by award-winning Los Angeles-based artist Kii Arens. Arens’ artistic career began when he became Michael Lang’s assistant for the 1994 Woodstock Festival. He has created poster and branding work for Coachella, The Hollywood Bowl, and hundreds of musicians across all genres.

The Woodstock 50th anniversary is being produced under license from Woodstock Ventures. Woodstock Ventures was founded by Michael Lang, Joel Rosenman and the late John Roberts. Together, the co-founders along with Artie Kornfeld, produced the historic 1969 Woodstock Festival. Kornfeld will be rejoining the team to celebrate and put together Woodstock 50.

Additional details will be released in the coming weeks, including lineup and ticket information, as well as sponsors, and nonprofit partners. Stay up-to-date on official Woodstock 50th Anniversary Music and Arts Fair news on Twitter, Instagram, Facebook and Woodstock.com.

Created in 1969 and billed as “3 Days of Peace & Music,” the legendary Woodstock Music & Arts Fair was a reaction by the youth of its time to the tumultuous conditions they faced and the causes that inspired them —civil rights, women’s rights and the antiwar movement. Woodstock was a defining cultural and historical moment that brought hundreds of thousands of attendees together for music, peace and love.

Woodstock Co-Producer and Co-Founder, Michael Lang is bringing the festival back in the true spirit of the original – to unite people in a shared experience with great artists, and encourage active support of equality, inclusion and a shared sustainable future. The Official Woodstock 50th Anniversary Festival will bring three days of peace, love and music back to Upstate New York from Friday, Aug. 16 through Sunday, Aug. 18, at Watkins Glen International. Learn more about official Woodstock 50 news on Twitter, Instagram, Facebook and Woodstock.com.

Woodstock Ventures was formed to produce the legendary Woodstock Festival and is the owner of the trademarks, copyrights, and other intellectual property derived from the Woodstock Festival. The company’s partners include three of the original Woodstock producers, Michael Lang, Joel Rosenman, and John Roberts’ family. Today, Woodstock Ventures creates events and develops projects consistent with Woodstock’s values and supports causes and organizations that complement those values. Please visit the official site of Woodstock Ventures at www.Woodstock.com.

SPILL NEWS strives to keep our readers up to date with news and events in the music industry. We keep you informed of the most recent information regarding new releases, tour dates, and information items about your favourite artists.
RELATED ARTICLES
newswoodstock