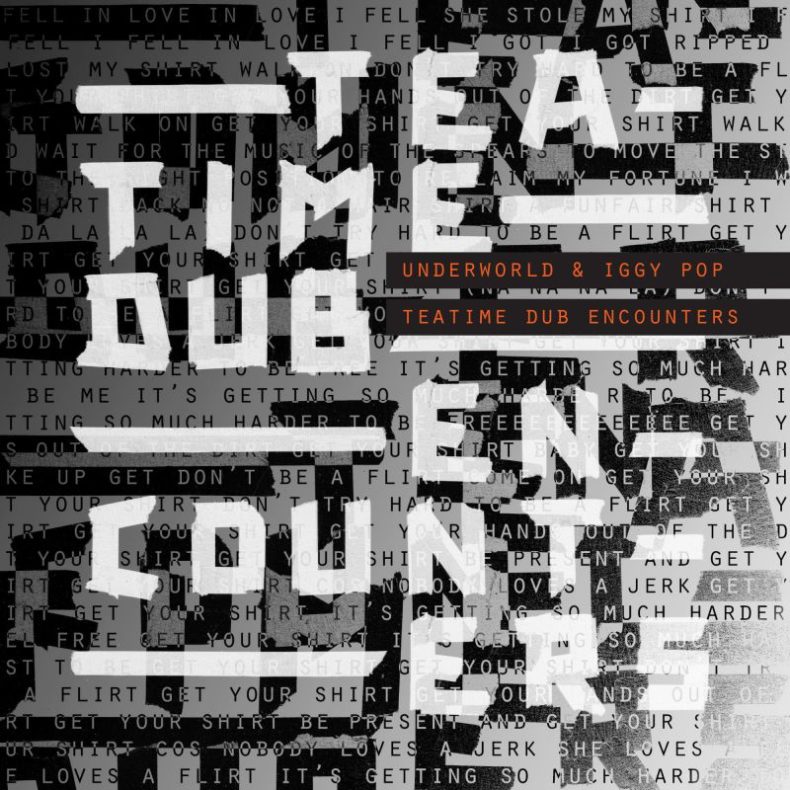 Underworld and Iggy Pop announce details of a 4 track EP, Teatime Dub Encounters, due for release on July 27 via Caroline International.

While overseeing the soundtrack for T2 Trainspotting, Underworld’s Rick Smith arranged a meeting with Iggy Pop in a room at the Savoy Hotel on London’s Strand to discuss working on collaborative music for the film.

Says Rick Smith “Iggy was staying at The Savoy and graciously said ‘yeah you know we can meet and talk about something’ because we both felt a strong connection to Trainspotting and to Danny. I turned up thinking I’ve got one chance here to convince this gentleman that we should work together. So I turned up with basically half my studio, hired a hotel room, set up and sat waiting.”

Says Iggy Pop “When you are confronted with somebody who has a whole bloody studio there in the hotel room, a Skyped director who has won the Oscar recently and a fucking microphone in front of you and 30 finished pieces of very polished music, you don’t want to be the wimp that goes ‘uh uhhh’, so my mind was racing.”

Teatime Dub Encounters is the result of a few clandestine hotel room recording sessions, that began a few weeks after Underworld and Iggy Pop had each released their last albums (Barbara, Barbara We Face A Shining Future and Post Pop Depression respectively) on the same day (March 18, 2016). It is neither historical or a tribute to past work, it is the work of artists in motion, engaged in a process that they both bring to all of their work – one that uses spontaneity as a spur for creativity.

The first track from Teatime Dub Encounters – “Bells & Circles” – was premiered live as part of Underworld’s recent headline performance at the BBC Biggest Weekend Belfast. A second track – “I’ll See Big”– is streaming everywhere now. Something of a flipside to “Bells & Circles,”“I’ll See Big” is a wash of gorgeous ambient sound that features Iggy recounting how friends – however dysfunctional – have saved him from a lifetime of bad decisions. The lyrics for “I’ll See Big” were inspired by a conversation Iggy had with Danny Boyle about the subtext of both Trainspotting films.

by Matt Owczarz on May 29, 2020
Iggy Pop Lust For Life (Deluxe Edition) Virgin Records Iggy Pop’s second solo album, made in collaboration with David Bowie and recorded in the divided city of Berlin in 1977, [...]
7.0