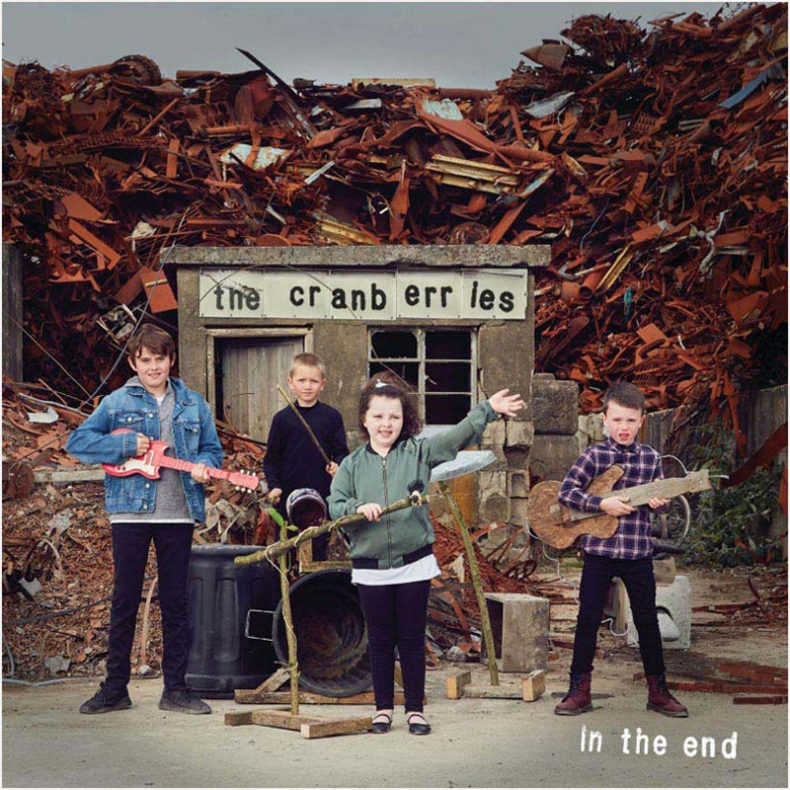 Thirty years after forming in Limerick (initially as The Cranberry Saw Us) The Cranberries are set to release their 8th and final album In The End. With Stephen Street once again taking producer duties, the eleven-track record brings a remarkable career to a fitting and powerful closure. Announcing the album, the band has shared the first single “All Over Now” that blends rock, alternative and catchy almost pop-sounding melodies to deliver a classic Cranberries sound.

The Cranberries – Dolores O’Riordan, Noel Hogan, Mike Hogan and Fergal Lawler – emerged from the pre-Brit-pop scene of the early ’90s, with their trademark indie guitar sound and Dolores’ distinctive Celtic-tinged lilting vocal style – described by Melody Maker as “the voice of a saint trapped in a glass harp”. Their rise to global fame was nothing short of meteoric; best known for their now classic songs “Linger”, “Zombie” and “Dreams”, the band have sold more than 40 million albums worldwide.

While it is tinged with sadness following Dolores’ unexpected death on January 15th, 2018, In The End is not a valediction, it is a celebration, one that stands as a powerful testimony to the life and creative work of Dolores and her brothers in music Noel, Mike and Fergal.

The genesis of In The End began in May 2017 while the band were on tour. By winter of 2017 Noel and Dolores had written and demoed the eleven songs that would eventually appear on the album. “Dolores was so energized by the prospect of making this record and to getting back out on the road to play the songs live,” recalls Noel.

In coming to terms with her tragic passing Noel, Mike and Fergal listened to the songs and, with the support of Dolores’ family, wanted to honor their close friend, and collaborator by completing the record.

Speaking about the band’s concerns at the time Noel said, “we knew this had to be one of the, if not the, best Cranberries album that we could possibly do. The worry was that we would destroy the legacy of the band by making an album that wasn’t up to standard. Once we had gone through all the demos that Dolores and I had worked on and decided that we had such a strong album we knew it would be the right thing and the best way that we could honour Dolores.”

With the songs at various stages of completion they turned to Stephen Street – who had produced four of their previous albums including Everybody Else Is Doing It, So Why Can’t We? and No Need To Argue – and spent 4 weeks in a London studio building the sounds around her vocals from the original demos. “It was a bitter sweet time. The joy of recording new tracks is always exciting and one of the best parts of being in a band. At the end of every day when we’d laid down our parts there was a sense of sadness, knowing that Dolores wouldn’t be in that evening to work on that day’s track,” remembers Noel.

The album is a strong goodbye from the band to their fans, a fitting tribute to their bandmate and friend and, most importantly, a collection of powerful songs that can take their rightful place with The Cranberries’ previous six records.

Speaking about the single and the album Dolores’ mother said, “I miss her awfully, specially today, as does the entire family. That said I can’t think of a more fitting way to commemorate the first anniversary of her passing and to celebrate her life than to announce to the world the release of her final album with the band. She was very excited about this new album and was really looking forward to its release. I have no doubt that she is happy now and would be delighted with today’s announcement.”

SPILL NEW MUSIC strives to keep our readers up-to-date with new releases by your favourite artists, keeping you informed of new album, single, and video releases. Stay tuned -- who knows, you might just discover your new favourite band.
RELATED ARTICLES
all over nowbmgdolores o'riordan
10