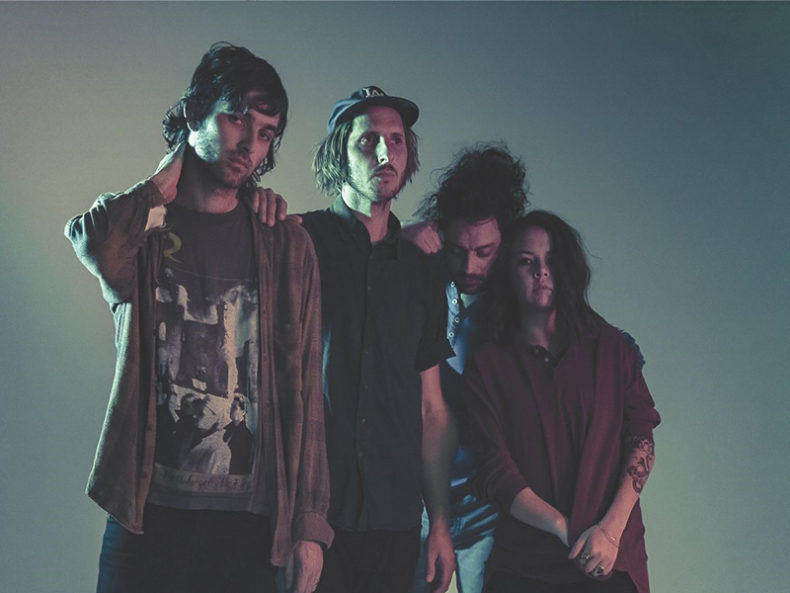 Sego has announced their new LP ‘Sego Sucks’ and have shared the Matt Odom directed video for their new single “Shame”. The band also did an Origins piece for the website, explaining their influences behind the track. ‘Sego Sucks’ will be out 4/5 via Roll Call Records. The band also announced a couple shows including one at Sundance Festival. Dates are below. You can pre-order the album here.

“U.S.A.! U.S.A.! U.S.A.!” Not what one would expect to hear chanted vehemently from the members of an indie rock band in 2019… But Sego seems to get off on doing things one wouldn’t expect from an LA indie band today. Being proficient at their instruments instead of relying on computer tracks to play their new album Sego Sucks live, recording said album in a church in far away Canada in the winter, thus committing to the deliberate notion of an album more than an amalgamation of ‘laptop studio’ singles. And yes, chanting “USA, USA, USA” as the main reprise of a reflective tune about entitlement culture. One must ask why? Why take it there? Or one may not ask and instead bounce and bop their way through each energetic turn, just happy to have their blood pump a little faster than the “everything chill all the time” pace that we’ve all become accustomed to.

And therein lies the trick of Sego. It’s a gosh-damn choose your own adventure story of music for adrenaline huffers and introspective socio-philosophical types alike. Not that the two are mutually exclusive.

I would say Sego hails from Utah, but when does anyone say that someone ‘hails’ from anywhere other than in gratuitous band bios, ya know? Sego is not only aware that their Utah upbringing is different from most Angeleno transplants, but they exhibit a sense of pride in the perspective it has given them. Perhaps this is why singer Spencer Petersen finds ways to separate himself from the status quo. Likeusing a flip -phone still. And recording interludes with one of the many tape machines he has stock-piled in his studio. Sego Sucks is the cathartic result of a person like Spencer sorting his way through a natural resistance to being smothered by Modernism.

Sonically, the 10-track LP is woven with the changes of becoming a four piece band. Originally Spencer Petersen and Thomas Carroll, the band added members Alyssa Davey on bass and Brandon McBride on guitars and keys in 2018. The sound became more focused, but the raucous spirit that has kept people sweating since the beginning is just as tangible and, dare I say, primal as ever. The extensive touring they’ve done throughout North America, Europe, and the UK has also shown to be a strong influence. There’s heat, there’s resistance, there’s intelligence. Did Sego fool us and write a modern day punk album that could be played on the radio?

To go to a Sego show is to be standing amongst very different people having very different experiences. To your left is someone intently staring at Spencer digging through his many acid-tongued references trying to decipher his cryptic slant on absolutism. Behind you is a gear-nut scratching their heads trying to understand what far corner of the brain one can write such dissonantly triumphant guitar parts. In front of you is someone falling in love with Tom, Brandon or Alyssa depending on who the light falls upon in any given moment… or perhaps all 4 at the same time, the way it was always intended to happen when a band is really a band. But perhaps most common is the person to your right, who is dripping in sweat, dancing with their eyes closed and losing themselves completely in an anoetic experience particular to when music is being played live. And loud.

While only on their sophomore album, Sego exhibits the kind of maturity in songwriting and pride in a live performance that makes for the band that your cool older brother worships and turns you on to the second your frontal lobe develops enough to spark your curiosity in taste.