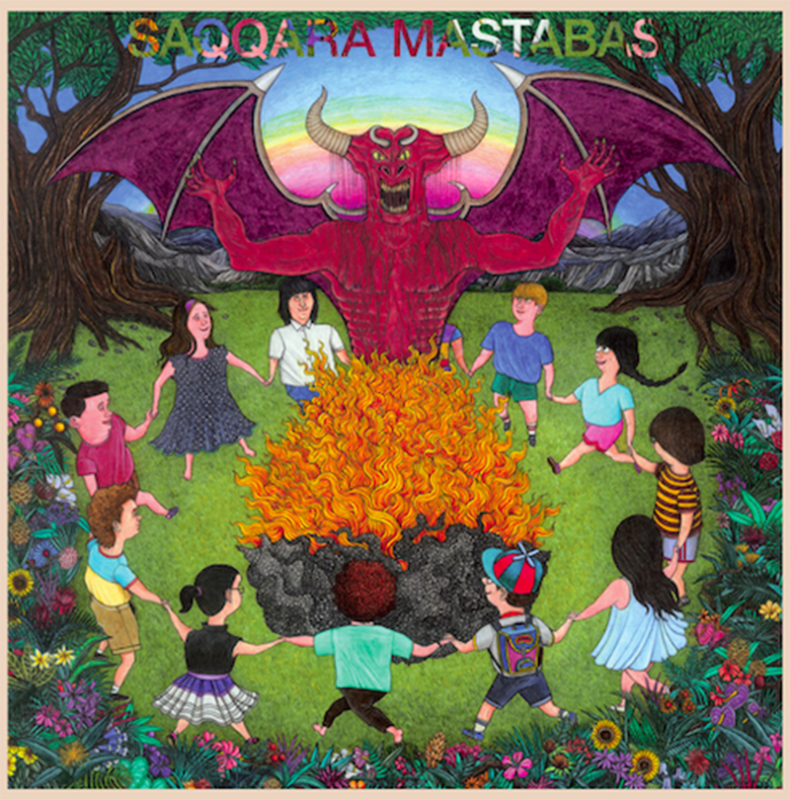 Stream “Uto On The Upswing”

Saqqara Mastabas — a new project from Matthew Friedberger of Fiery Furnaces and Bob D’Amico of Sebadoh & Fiery Furnaces — will release its debut LP, Libras, on June 3rd via Joyful Noise Recordings. It’s currently available for pre-order on all formats, including Silver Lava vinyl with clear splatter (limited to 400 hand-numbered copies.)

Quick and chaotic lead single “Uto On The Upswing” gives listeners a taste of what to expect on Libras, with frhttp://spillmagazine.com/wp-admin/edit.php?post_status=draft&post_type=postequent rhythmic and tempo changes and manic melodies. You can now stream the track below.

By way of explanation, the band sent us the following (read at your own risk):

Somehow, condemned to the underworld/whateverworld, they sustained the light for millennia/millennials. Keeping their Ka-Ba intact and entire they always knew the Power and the Pleasure of the Sun God/Some Guy would grant (though they never fill out the forms) them so-called Eternal Creativity (i.e., QQreativity) if they could just complete the journey and Rise Above! Following their righteous path, they ignited Fiery Furnaces (FEE-ery Fur-Nace-es-EH) and stumbled the inner steps of the Sebadjoser pyramid to finally reach the Night Light!

The two ancient souls/old people from Under Earth had sublated their fate and became Children/Mature Students of the Upper Light—Hermopolis Magna became Matthew Friedberger and Waan’Ubyee Shemayet became Bob D’Amico. They are now proud makers of Joyful Noise (insert plug here) made possible by their Outlet to Eternity—the SAQQARA MASTABAS.

Libras was recorded in 2013 according to the Incorrect Calendar: we number our days by means of Moon Mathematics, as you might guess: in other words, Serpent Scales: for further information, listen to the tracks. The mighty train tracks on aka A Couple of Zebras: this is the train to Babylon says the Long Island Railroad! Tomb Times are Arriving—on Track 6! So Libras was made in so-called ‘2013’ in the middle of Paris and the bottom of Brooklyn. Obviously then, it was made under the influence of the Nubian Nantiquities (remember your Iiaison) languishing in the Louvre. But more than that: it was obviously made under the influence of Atlantis which as everybody knows is sunk in the sea less than 1 tiny nautical mile from the terminus of Bay 13th St. and the Belt Parkway! Yes: that’s exactly where it is. Didn’t you know? The Magnetic Moon Mathematics Music of Old Dynasty Atlantis, if not quite reborn, has at least Crocodile-d to the surface, eyes peeping out, nostrils sucking up as it were. Where? There: on the flood-formed island of Libras by Saqqara Mastabas. Hail Atlantis!

So SM invites you, entreats you, begs you for goodness sake to stay on the south side of your soul: promenade down Atlantis Avenue listening to Libras [the sign of a couple of zebras].

1. Walking Through The False Door
2. Fixed By The Tiny Talons Of The Future Goddess
3. No Escape For The Serfs On The Surf
4. Uto On The Upswing
5. Parade Of The Prisoner Priests On Parade
6. Smoking On The Mountain, Embalming In The Valley
7. The Failure (Of The Fencing Of The Underground Apart From The Apartment’s Part)
8. Unknown Term For Butcher
9. The Cosmetician’s Knife