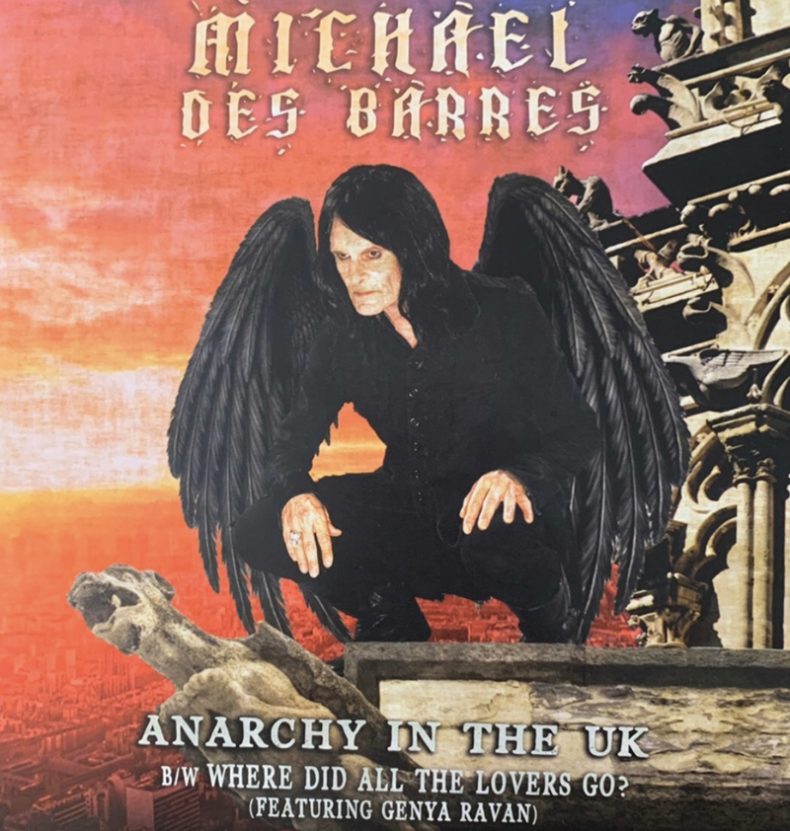 Rocker, actor and European Marquis Michael Des Barres has released his newest single, his alternative and timely take on the Sex Pistols’ 1976 classic, “Anarchy In The UK” —- available now!

“My version of ‘Anarchy In The UK’ is not an angry one,” Des Barres is quick to confirm. “The Sex Pistols were angry, but I am not angry!”

The track is backed with a self-written song “Where Did All The Lovers Go?” featuring Genya Ravan (Ten Wheel Drive, Dead Boys, Ronnie Spector) on co-lead vocals. It’s anchored in additional purpose, as well; “100% of the proceeds from the release will be donated to the Poor People’s Campaign: A National Call for Moral Revival in an effort to confront the interlocking evils of systemic racism, poverty, ecological devastation, militarism and the war economy, and the distorted moral narrative of religious nationalism,” Des Barres shares.

“I wanted to record the song as if it was a warning that we live in dangerous times and the only thing to negate that danger is loving and being there for each other. It’s an opportunity to understand that love conquers all, especially now.

“I’m a huge fan of the Sex Pistols — Steve Jones, who I was in a band with in the 80s (Chequered Past), is one of the greatest guitarists rock n’ roll has ever experienced and I love him dearly,” he continues. “And I think John Lydon created a masterpiece lyrically.

“I have reinterpreted it in my own way to reflect the times we live in.”

With his own songwriting repertoire to lean on — including selling over seven million+ albums both as a recording artist and songwriter (his hit song “Obsession,” which hit #1 in 27 countries for LA new wavers Animotion, and continues to be featured in countless movies, tv shows and commercials) — why a cover?

“I think doing cover songs is a very good way to show audiences who you like and, for young bands, to learn how to write a great song,” he considers. “Listen to the greats, but never copy them.”

“Working with Steven producing has been the highlight of my musical career,” he says.

The love is mutual: “Michael continues to evolve, evoke, and provoke,” Van Zandt adds. “As he extends his streak of his new work being his best work, he proves once again that virtually everyone from the Rock Era has made the very concept of chronological time totally irrelevant!”

Considering Des Barres is an artist who says “volume is an instrument,” it’s no wonder there’s a documentary slated for upcoming release following and reflecting on his storied career. His comfort in front of the screen vs stage will be natural: Also an actor, Des Barres’ credits include starring as Murdoc on the original MacGyver, as well as parts on Seinfeld, To Sir With Love, Roseanne, appearing in more than 40+ feature films, and more.

“We’re not here to impress, we’re here to learn and entertain,” he offers. “I’ve never been interested in technical ability, I’m interested in what an artist is feeling. It’s why I say to only write music to please yourself, never write what you think you should be writing.

“Regret nothing. Just be kind, be cool, and be courageous!”

“Anarchy In The UK” is available now.