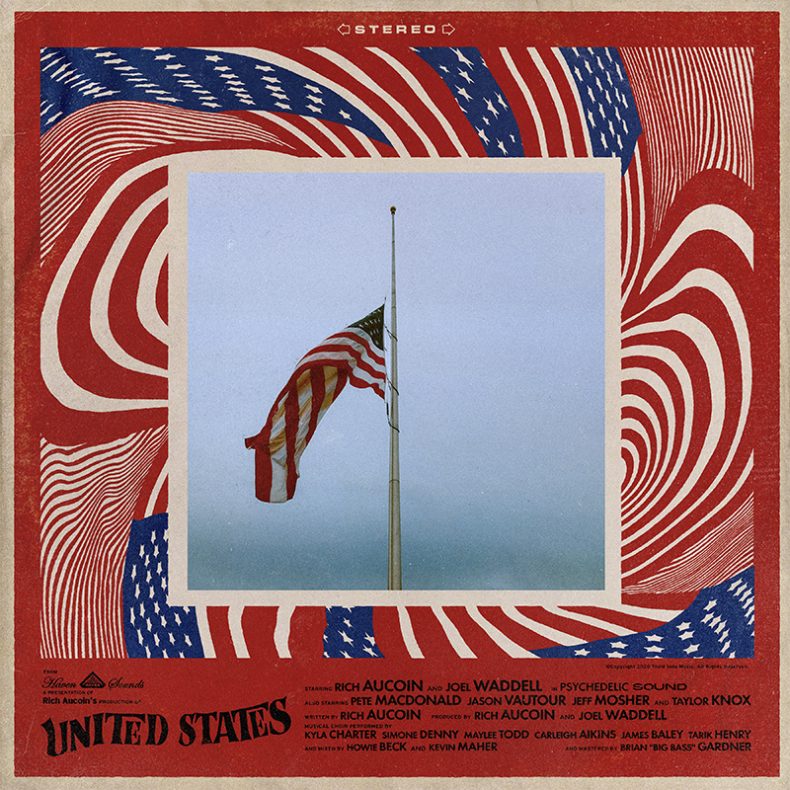 Rich Aucoin’s new album United States, is out now via Haven Sounds along with the music video for the lead single “Walls”.

“Walls,” the fourth single after “Dopamine”, “Reset”, and “How it Breaks” is a powerful song with an incredible music video like nothing you have seen before.

“After some explicit videos cut from news footage,” notes Rich “I thought it would be good to have a video that was lighter and so we came up with this video as a kind of sequel to my “It” video but instead of classic films, it’s a cutting together of 22 of the most iconic music videos of all time from Beyonce to Weird Al! We had an amazing team and crew putting this all together and it’s really fun to see the artists in the videos break down the walls in between their sets and join each others’ videos and hop from screen to screen on a classic YouTube landscape.

“This song is a call to breaking down the walls which keep us from connecting with one another but physically and metaphorically,” says Rich. “Building off the calls for collective protest change in ‘How It Breaks’, this song is appealing to not make the divisions amongst our groups be so hard cut off for membership and to keep lines of communication and compassion open to enable more and more to join the team. It’s the first time on the album the women and men’s voices are divided up for some call and response with its chorus ‘these walls’ ‘separate our humanity’. The bridge brings light to the fear that’s keeping this opening up from easily occurring ‘terrified, nation-wide, far and wide, great divide’ and the calls to action: ‘we’ll tear it down from the other side, we’ll knock it down from the other side, we’ll bring it down from the other side, we’re reaching out to the other side.’”

Aucoin wrote United States, observing America from the ground level, while cycling across it for Mental Health America and the Canadian Mental Health Association. While taking this Robert Frank approach, Aucoin composed a song for each of the 12 states he pedalled through. The record is as much about the current socio-political climate of America as it is about states of consciousness; as much fuelled by the burgeoning American protest movement or Hedges’ social commentary as it is fuelled by McKenna/Pollan world of psychedelics and meditation apps.

Rich Aucoin has never been short on ambitions or concepts. From his first EP, Personal Publication—on which he played over two dozen instruments and wrote it to sync to How the Grinch Stole Christmas—to We’re All Dying to Live’s 500 performers, to his death mediation Release, the pop anthemist has always dug deep and gone big.

But this is the first time he’s written a record from the grounds of a crumbling empire.

In the spring of 2018, Aucoin set off from Los Angeles on one of his customarily challenging (and eco-friendly) tours. Final stop: New York City. Vehicle: Bicycle.

He travelled the perimeter of the United States, down the west coast, across the south, and up the eastern seaboard. He saw a country, two years into a dictatorship, divided and hurting. A pair of wheels and his own two feet took him through landscapes varied in their construction and grandeur, from the boarded-up storefronts of Route 66 to the fountain formation of Red Rocks. Tiny towns and major cities. Thriving and fading.

At night, after cycling dozens of kilometres in a day, he would write about and demo the things he saw. Two years later, with its namesake country on the precipice of ruin, he’s turned that travelogue into United States, a journey through the states of consciousness that unite us all.

He began with an idea in each state, and fleshed those out lyrically while staying connected to something in that state, creating a living historical document.

In addition to the physical territory Aucoin traversed, he’s travelling new artistic ground as well: This is the quickest he’s ever made an album, recording it in a handful of studios across Canada. It’s got just 16 collaborators. It doesn’t sync up with an existing film. It’s a deliberately minimal work from a joyously maximal artist. True, he had to power himself across an entire country, but he came out on the other side with his most focused, deeply realized, catchiest album yet.

As the United States reckons with its narcissistic leader, its splintering systems, and a fed-up populace determined to have its voice heard, United States offers a soundtrack for these unwieldy, unpredictable days. It doesn’t pull any punches or sugarcoat any truths, but it’s got faith, and hope, and heart.

Aucoin has been long-listed for the Polaris Music Prize twice. His music video for “Brian Wilson is A.L.I.V.E.” won the Prism Prize. Aucoin has built a reputation as one of the best live shows in Canada according to CBC Radio3. His albums all sync to old movies like Pink Floyd’s Dark Side of The Moon with The Wizard of Oz. He has performed dozens of festivals including Osheaga, The Great Escape, Les Eurockéennes, Berlin Music Festival, Art Basel Miami, Luminato Art Festival, Iceland Airwaves, SXSW, and Pop Montreal.

by SPILL NEW MUSIC on March 4, 2020
HUMANS – “BEGGIN” HAVEN SOUNDS HUMANS is a Canadian indie-electronic duo made up of musicians Robbie Slade and Peter Ricq. Focusing on performance and production styles of both the [...]

by Meryl Howsam on May 17, 2019
Rich Aucoin Release Haven Sounds Rich Aucoin’s name seems almost synonymous with positivity. He has toured his music across countries by bicycle to raise funds for mental health and [...]