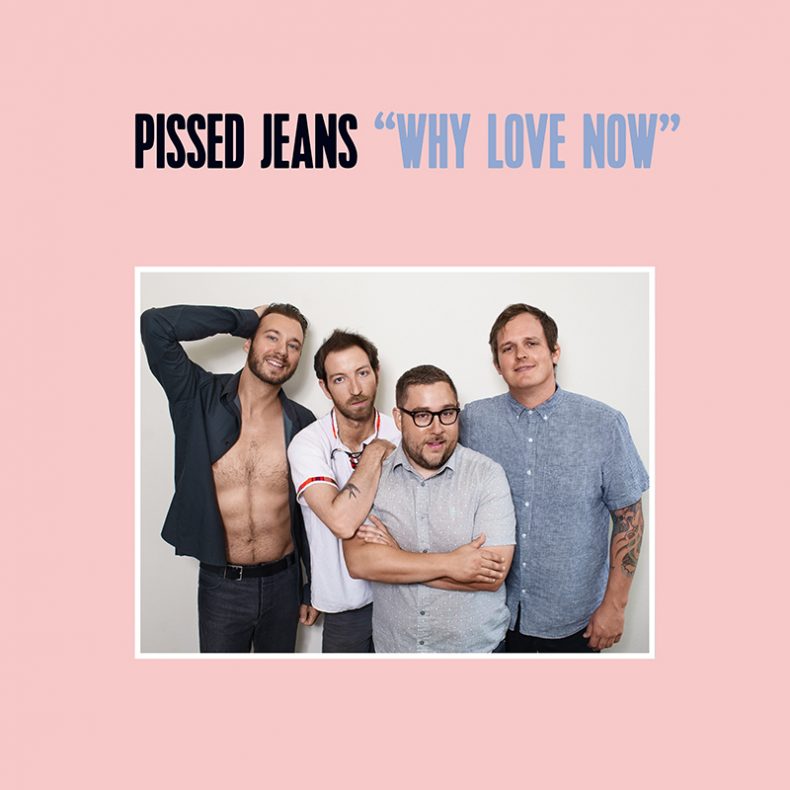 Philadelphia’s Pissed Jeans have been making gnarly noise for 13 years, and on their fifth album Why Love Now, the male-fronted quartet is taking aim at the mundane discomforts of modern life—from fetish webcams to office-supply deliveries. The album will see its worldwide release on February 24th, 2017 from longtime label Sub Pop.

Pissed Jeans’ gutter-scraped amalgamation of sludge, punk, noise, and bracing wit make the band—Matt Korvette (vocals), Brad Fry (guitar), Randy Huth (bass) and Sean McGuinness (drums)—a release valve for a world where absurdity seems in a constant battle trying to outdo itself. Why Love Now picks at the bursting seams that are barely holding 21st-century life together. Take the grinding rave-up and lead single “The Bar Is Low” [link] which, according to Korvette, is “about how every guy seems to be revealing themselves as a shithead.”

As they did on their last album, 2013’s Honeys, Pissed Jeans offer a couple of “fuck that shit type songs” about the working world, with the blistering “Worldwide Marine Asset Financial Analyst” turning unwieldy job titles into sneering punk choruses and “Have You Ever Been Furniture” waving a flag for those whose job descriptions might as well be summed up by “professionally underappreciated.”

And the startling “I’m A Man,” which comes at the album’s midpoint, finds author Lindsay Hunter (Ugly Girls) taking center stage, delivering a self-penned monologue of W.B. Mason-inspired erotica—office small talk about pens and coffee given just enough of a twist to expose its filthy underside, with Hunter adopting a grimacing menace that makes its depiction of curdled masculinity even more harrowing.

No Wave legend Lydia Lunch shacked up in Philadelphia to produce Why Love Now alongside local metal legend Arthur Rizk (Eternal Champion, Goat Semen). “I knew she wasn’t a traditional producer,” Korvette says of Lunch. “We wanted to mix it up a little bit. I like how she’s so cool and really intimidating. I didn’t know how it was going to work out. She ended up being so fucking awesome and crazy. She was super into it, constantly threatening to bend us over the bathtub. I’m not really sure what that entails, but I know she probably wasn’t joking.”

The combination of Lunch’s spiritual guidance and Rizk’s technical prowess supercharged Pissed Jeans, and the bracing Why Love Now documents them at their grimy, grinning best. While its references may be very early-21st-century, its willingness to state its case cement it as an album in line with punk’s tradition of turning norms on their heads and shaking them loose.

Why Love Now will be released on CD / LP / DL and is available for preorder now [link]. LP pre-orders through megamart.subpop.com will receive the limited Loser Edition on lavender vinyl (while supplies last).