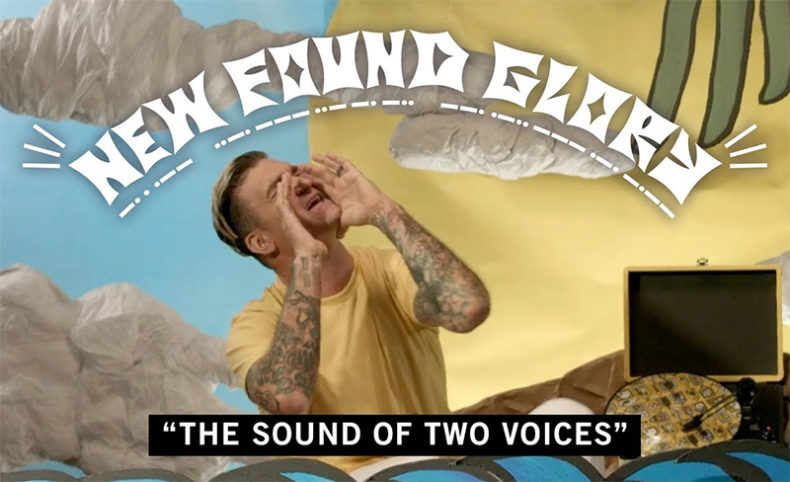 New Found Glory has premiered their new music video for the island jam “The Sound of Two Voices”. On the track, Billboard shares that the “most un-New Found Glory-sounding song (from Makes Me Sick) was also its best…’The Sound of Two Voices’ takes some steel drums and a ska-punk backbone, and rolls a fat one for anyone who thinks they’ve seen the last of New Found Glory’s fresh ideas.” Fans can check out the video here, and can also read an exclusive interview from Guitarist Chad Gilbert on Billboard.com. Additionally, they can purchase a Limited Edition Collectible Bundle that includes the “Makes Me Sick” Yellow Vinyl LP, a “Triton” T-Shirt, “Makes Me Sick” Sunglasses and a Custom “Go Fish” Card Pack here.

Makes Me Sick, the band’s latest full length, which was released earlier this year, experiments with new sounds, techniques and styles for the band. “The Sound of Two Voices” leads the charge in these areas and shows that a band that has been around for 2 decades can still create music as fresh as their first singles. The album landed at the #1 spot on the Record Label Independent Current Albums chart. Additionally, the album secured numerous charting positions including the #2 spot on the Current Alternative Albums, #5 for Top Current Rock Albums and the #39 spot on the Billboard Top 200. On the track and video, Gilbert tells Billboard “When everyone started loving the track, we wanted to make a video. The ‘Under the Sea’ thing and the meaning behind the song — we wanted to tie it all together. Those who have to struggle with addiction in their lives know the ‘you only live once’ mentality doesn’t really work because you can only do that for so often before you’re self-destructive.”

New Found Glory is also excited to be hitting the road again this Fall for the last US leg of their 20 Years of Pop-Punk Tour. Kicking off in Columbia, SC on October 24th, this tour will give fans two full albums each night from the band’s impressive catalog including Catalyst, Not Without A Fight, Self-Titled, Sticks and Stones, Resurrection and From The Screen To Your Stereo. The tour will travel to cities like Brooklyn, Cleveland, Salt Lake City, Portland, San Diego and New Orleans before wrapping up in Nashville, TN on December 3rd.

Fans can purchase the album on iTunes, Amazon, Best Buy or online, and stream it on Spotify. The album, produced by Aaron Sprinkle (MxPx, Anberlin, Acceptance) and mixed by Tom Lord-Alge (U2, The Rolling Stones, Blink 182), takes risks, introduces new sounds and proves that after 20 years, New Found Glory is better than ever.