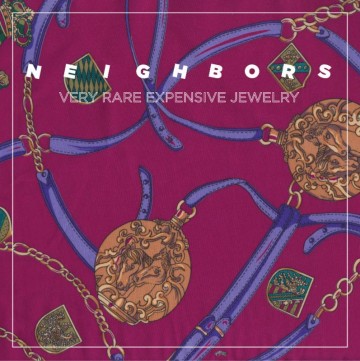 The catchy new tune “…bounces along on a wave of distorted guitar melodies that lend an almost whimsical counterpoint to the lyrics, which drip with cynicism but still registers as a good time.”

After six years of touring the West Coast and continental United States on top of cycling through five different band members, Seattle indie-rock outfit Neighbors have seen enough shit to pack together one hell of an album. Their latest offering, the forthcoming Very Rare Expensive Jewelry, is an eight-track journey into the unforgiving depths of stardom and success.

“I wrote most of the record when I was sobering up, going to therapy, getting on meds, and dealing with the end of a relationship that I ruined,” says frontman José Díaz Rohena. “In that weird space I was getting more ideas, better ideas, than ever before. My playing and singing got better. In many ways, I feel like this is a totally new band (I’m a totally different person now).”

Since Díaz Rohena’s initial move to Seattle from Pennsylvania, Neighbors has toured the states extensively and has released 2 cassettes, a CD, and a record. Inspired by the glory of double LPs (think Dusk Falls Over Cubist Castle), Neighbors recorded Very Rare Expensive Jewelry in 2015. The album echoes with indie excellence, but don’t get it twisted, this isn’t your average white-independent rock.

“I think that people assume from the music that I am white and it pisses me off,” Díaz Rohena quips. There are many more topics that the album focuses on, anyways, filled with inspiration as far and wide as Lee Hazlewood and The Velvet Underground.

“This record is, aside from the other things I mentioned, about the fear that you’ll wake up and 35 years have passed in the blink of an eye. Or about how you look back ten years and it feels like another life, another planet. Or how sometimes it’s hard to imagine that the world actually continues past what’s in front of you,” Díaz Rohena added. “Now that everything in my life is really good I’m tripping on basic questions of mortality/things changing/people leaving and dying. Makes me realize that the material on this new record is more relevant to me than ever.”

Very Rare Expensive Jewelry will be available on vinyl (Malaka Records) and Cassette (Help Yourself Records) on March 4, 2016.