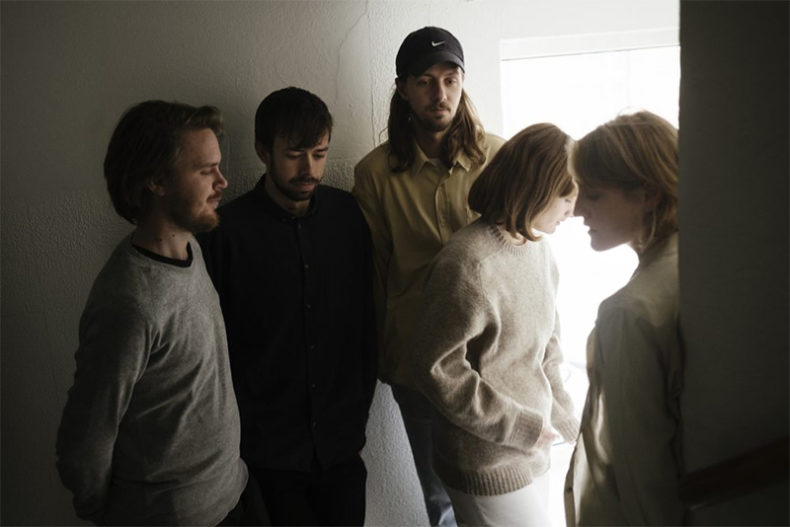 Last month saw Danish quintet Lowly release their brilliant sophomore album Hifalutin through Bella Union, a wildly impressive and intricate collection of 14 songs that have along their way caught the ear of many a fan, including Brian Eno. With an EU tour having just been wrapped up the band have today shared a black and white film to accompany their beautiful track “12:36”.

Directed by Martin Masai Andersen and shot over four weekends in London, the video documents Stefani and David, a homeless couple struggling with addiction. Speaking of the video the band elaborate: “Martin has created a documentary about two people finding comfort in each other. He has shown a stark and very honest look into a “day-in-the-life” of a drug addict with all the issues surrounding it, including sleeping rough and also being in a relationship. He does it in a poetic and empathic way, not to manipulate or be sentimental about it, but just to show a real story. The meeting between our music and his visuals is pretty remarkable. To us the song embodies the collision between conflict and peace and identity, between the female and masculine, the fragile and soft against the hard. It’s a song about existing and being hyper sensitive about that very fact. Through Martin’s lens we get a view of Stefani and David’s life, but also their emotions and thoughts as well. We feel honored to be invited into all their worlds.”

A band unafraid to reach beyond their comfort zone, Lowly thrive on the embrace of doubt and curiosity. An inquisitive spirit drives the quintet’s second album, which evolved from an open-ended process in large spaces, from lost factory halls to water towers. Released via Bella Union in April, Hifalutin brims with suggestive discoveries from its title onwards. Dictionary definitions include “pompous” and “larger than life”; the word is also antonymic with the word Lowly. However you take it, the result is the work of five people expressing themselves freely as a tight collective: focused, yet fertile with possibility.

Warmly received in Pitchfork, Uncut and elsewhere, Lowly’s debut album Heba was a feast of dramatic dream-pop, yet, Hifalutin is more ambitious still. The album was primarily recorded in a 150 square meter warehouse, just outside the city of Aarhus. Band members recorded their parts as individuals and as a group; meanwhile, the producer, Anders Boll, placed microphones in nooks and crannies of the enormous space, all the better to highlight the dynamics between the band members.

“We dared to be even more curious,” explains guitarist and singer Nanna Schannong, “and started recording without knowing where we would end up. This curiosity released a huge amount of trust and confidence between us: we became much more tolerant of each other’s diversity, and dared to give each other space. It also meant that some sketches suddenly became two pieces… or, that eight to nine different pieces suddenly found themselves in one song.”

A willingness to turn their backs on accepted frames of practice, for both recordings and performances, has characterized Lowly since their formation in 2014 at the music academy in Aarhus, Denmark, where they studied different subjects but forged a unique chemistry out of contrast. Last autumn, they played a concert in Brønshøj Water Tower, in the suburbs of Copenhagen, where the reverb was long and pronounced. The band had to carefully reconsider which notes and chords they could play; too many tones would muddy the sound. Pieces from this concert would find their way to Hifalutin.

As synthesizer player Kasper Staub reflects, “We want to give doubt, and curiosity, a voice. It is needed in a world characterized by obsession and goal-orientated living. You don’t need to know the answer in advance to express yourself. If we don’t allow ourselves to forget the goal, we risk missing all that we did not already know.”

Fittingly, Hifalutin is an album of many entrance points. After the glistening come-hither to wandering minds of “Go for a Walk”, ‘Stephen’ reflects on death, inspired by the loss of Professor Stephen Hawking. The warm currents of “Baglaens” (or “backwards”) contrast sharply with the buoyant beats cluster of “Staples”. “I” resembles a hymnal Stina Nordenstam, constantly seeking new ways into a song, while the alt-R&B-ish “In the Hearts” offers an unguarded paean to connectivity. As Lowly put it: “It’s about the magnificent power of love that transcends everything and connects us all.”

These diverse songs find hidden connections to each other through the chemistry between the sounds and Boll’s productions. And, of course, through the literate, abstract lyrics, which include references to works by experimental poet Inger Christensen and Persian poet Jalal ad-Din Rumi. “Our lyrics consist of images and scenes that briefly glide into one’s field of view, and then disappear again,” co-lead singer Soffie Viemose explains. “We’d rather show something than say something quite literally.” An invitation sent from and to curious minds, Hifalutin is luminous modern pop at its most delicate and robust, assertive and open-ended.